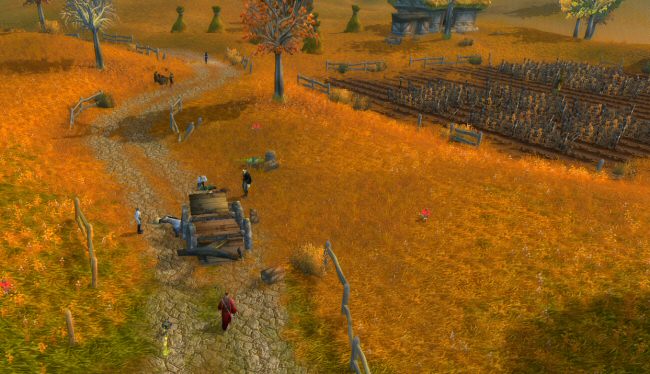 Have you ever tried to get directions from old people in a small town? “Yeah, go down the road until you get to the flower shop that used to be a gas station, then turn right and go until you get to the empty lot that used to be a Denny’s. Turn left, and head on past the old school.” I think it’s kind of impressive how someone can have numerous overlapping versions of a city in their head, keeping track of not just what a place looks like now, but how it looked thirty years ago. Although it does make their directions incomprehensible to young people.

World of Warcraft is now suffering from this.

Pre-Cataclysm, these two idiots were standing here along with their horse and a loaded cart, giving out quests. Their story was that they had been driven from their homes by bandits and were fleeing Westfall. Their quests had you running around, gathering up stuff for them. One quest had you get feed for their horse by running around swiping sacks of oats from other farms.

So now quests and locations are often references to how things used to be. This is not a bad thing, it’s just odd to see this phenomena appearing in a virtual world. 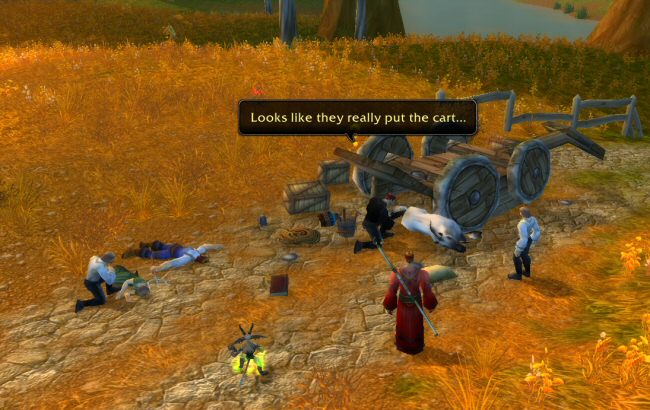 We have arrived in Westfall to find a murder scene. One detective Horatio Laine is conducting an investigation. Since Norman is a rube, he stops to see if our help is needed.

The detective turns to us, “Here’s the deal, kid …”

“I’m twenty-five,” Norman says. “And my partner is like, a million years old or something.”

“We’ve got a full-blown murder on our hands. Double homicide … Single horse … icide.”

“Worse yet, we’re in Westfall. I could throw a rock behind me and hit a dozen hobos with enough motive to want to wipe these people (and horse) out.”

“Motive? They were broke and homeless. The only thing they had of value was their horse, which was killed with them.”

“Now I don’t know who did this and I sure don’t appreciate having to come to this dump to investigate the deaths of a couple of squatters, but I’ll be damned if I don’t find the perp. You want to help?”

In case you’re not picking up on it, this quest chain is a reference to the CSI: Miami meme, where detective Horatio Cain says a one-liner with a dramatic pause at the top of the show. The standard form would be:

Now this game is filled with memes and pop-culture references. For example, there’s a fashion designer named Harris Pilton. But this CSI one is a bit odd because of how obvious it is. This isn’t a sly wink or a nod to a meme, this is outright participation. Which is odd, because is probably won’t age well. The quests in original WoW ran for six years before getting an update. Imagine how stale the CSI joke will be six years from now. Imagine if there was an “All Your Base” quest in the game right now, where you have to talk to a guy named Cats and move a zig. It would feel pretty rusty, and this quest is probably doomed to a similar fate in a couple of years. It cracks a smile now, but in 2015 this will be met with a shrug or an eyeroll. 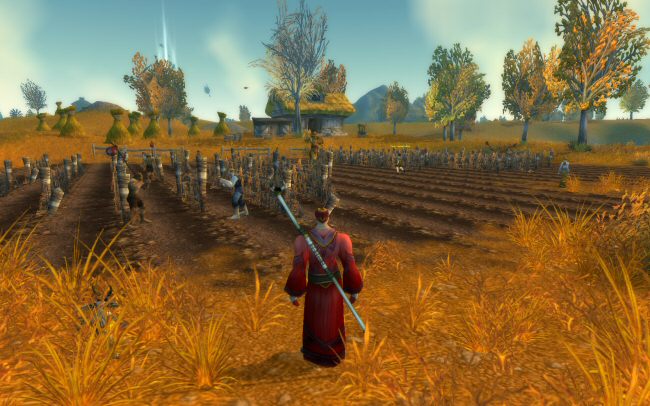 I nod at the vast field of hobos in front of us, “Good crop this year. Really poor and smelly.”

“I guess we just ask these guys if they saw anything?” Norman shrugs.

We walk up to one of the dirty bums standing around the field. Norman gives him a couple of coppers and asks him what he saw. His answer is that he tries to kill us. “You can’t buy me! DIE!” he screams. 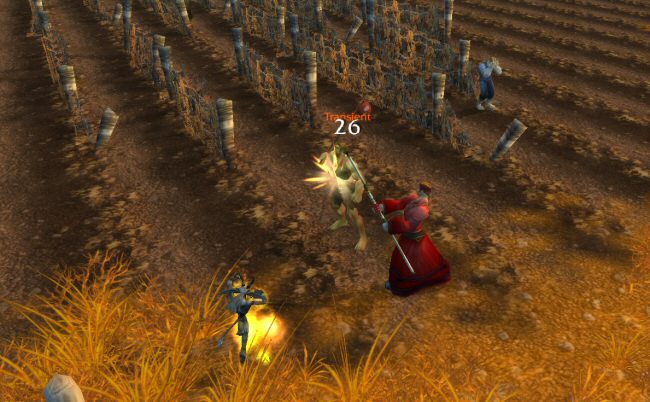 Norman sets him on fire, yanks out his soul, scorches his mind with searing agony, and then bonks him on the head with his staff. I don’t even get a hit in before the guy drops dead. Afterward, children rush in and take all his stuff. 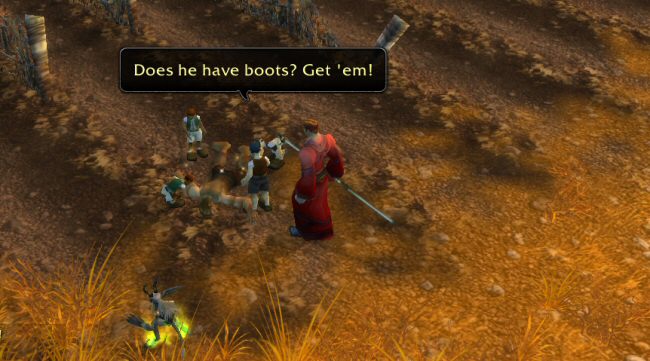 “Not sure why he attacked me,” Norman says scratching his head. “I mean, he could have just said ‘no.'”

“I guess we just got lucky then,” I say.

Not sure what the deal is with the kids that spawn and loot the hobos. I guess it’s to keep you from farming these guys for loot? 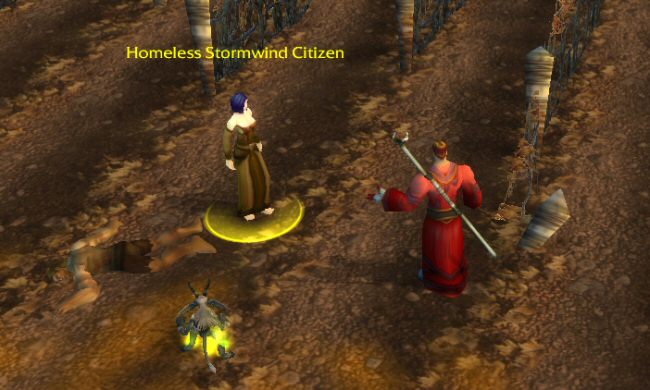 We try again with another hobo. She’s only about ten paces away and she couldn’t have missed what just happened to the last hobo, but she decides to try her knuckles up against Norman’s demonic power, and ends up overdosing on fire. 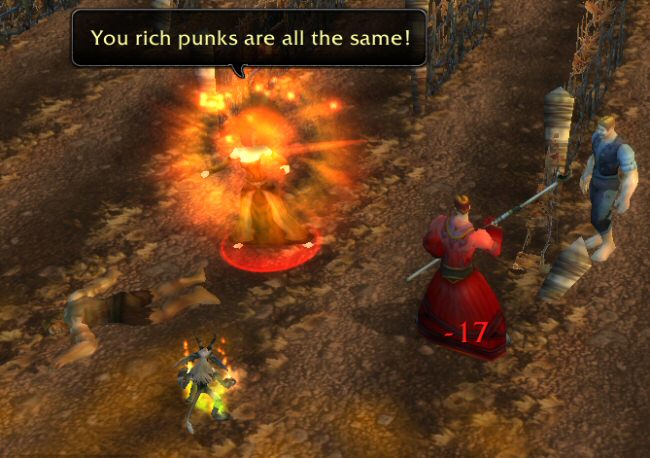 “What is wrong with these guys?” Norman asks once the smoke clears and the kids have robbed the corpse.

“No, I mean why do they keep fighting us?”

The next guy gets mad and runs off, screaming about Murlocs. The next one picks a fight.

The next hobo shouts something about Gnolls before he runs away. Then we kill a couple more. 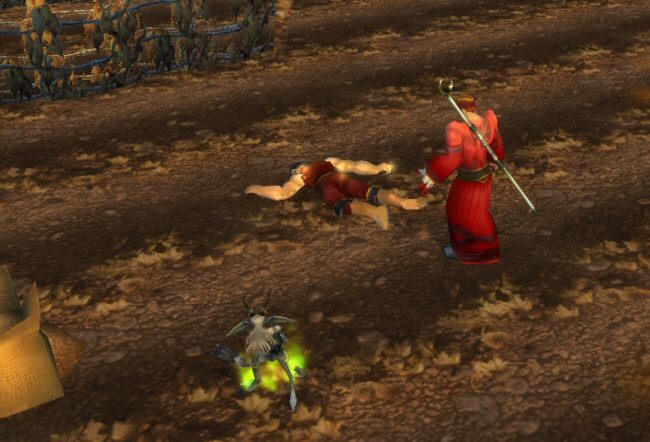 “I would not expect a murder investigation to involve killing this many hobos,” Norman says.

Eventually we head back to the detective. Norman gives him the story, “I didn’t find out who perpetrated this murder, but I committed about five more over there.” 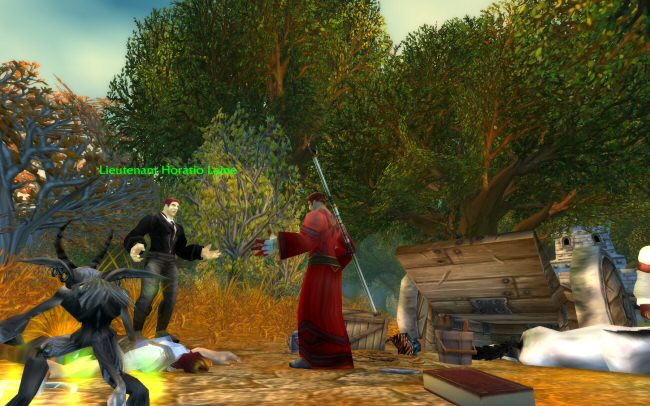 “Did you find any evidence?”

“The kids stole all the evidence.”

“I mean about this murder.”

“Uh. Some of the hobos were screaming about Gnolls and Murlocs?”

“Perfect? It looks like they were ran over by their own cart. Anyway, that’s all the bums had to say.”

“This is murder, plain and simple and we’re gonna get to the bottom if it… “

“Maybe they were killed when they asked a perfectly innocent question to one of these murderous, bloodthirsty vagrants?”

“I need you to head out to the Longshore, west of here, on the coast, and shake up some Murlocs. Try to find a clue or some info that can help shed some light on the murders.”

“Er … what? You said yourself that Murlocs didn’t do this. You’re saying you know the Murlocs are innocent and you want me to kill a bunch of them anyway?”

The next time some teacher or librarian gets all high and mighty about the importance of literacy, remind them that only literate people have to worry about reading quests like this one. Illiterate people can run around happy and carefree, killing Murlocs and Gnolls without worry or guilt. Literate people are tormented with this absurdity and end up doing drugs to try and make sense of it all.

My advice? Don’t learn to read. If you already know, try to forget as fast as you can. 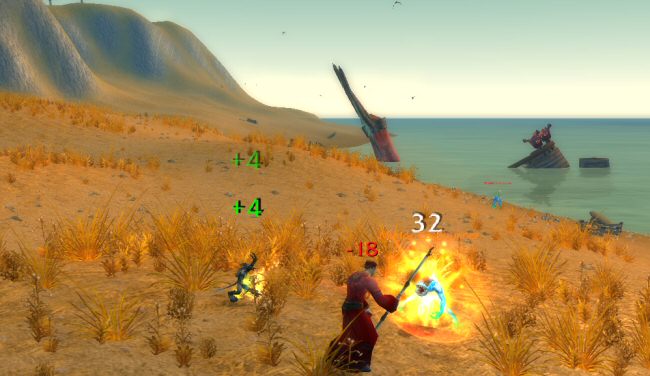 So we go out and kill a big pile of innocent Gnolls and Murlocs. They don’t have any information related to the case, but once we’re sick of butchering them Norman gathers up some scraps of random stuff and calls it evidence. We get back to Horatio and Norman gives him the stuff he found – a torn piece of paper and a bit of cloth.

The detective takes the litter, “Is this some kind of joke, rookie? Because I’m not laughing.”

Norman shakes his head, “No. Your investigation is enough of a joke for us, thanks.”

“Looks like we got ourselves a real ‘whodunit’ here, rookie. Unfortunately it looks like the locals aren’t willing to talk and the clues you got off the Gnolls and Murlocs are damn near worthless.”

Norman rubs his temples, “That’s because the guys you sent me to kill weren’t suspects. Look, are you really a detective?” 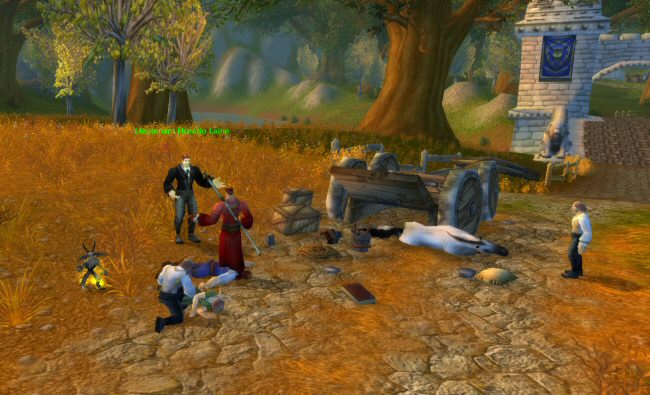 “We’re going to have to initiate plan… be on the lookout for Two-Shoed Lou. Two-Shoed Lou is a coincidental informant of mine who, ironically, makes his home at the Furlbrow’s old pumpkin farm. Head over to the farm and find out what Lou knows.”

Horatio sends us to a farm house where Two-Shoed Lou, his informant, is waiting. So we head over there. 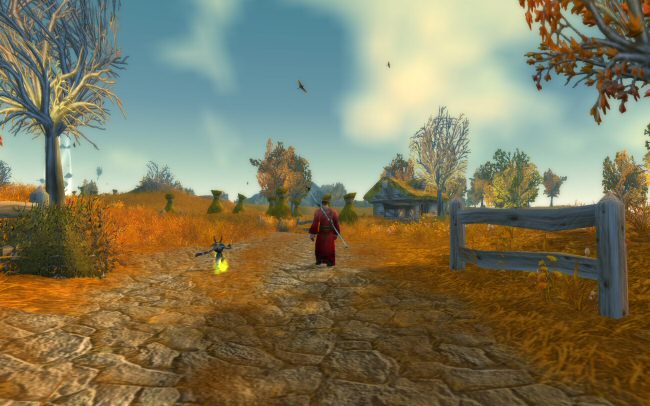 “Yeah, I guess I thought it would be different here. I thought maybe now that we’ve left Elwynn Forest things would stop being so nuts. But Horatio seems just like Dughan. We’re doing his job, and his job doesn’t even make any sense.”

“Look boss, this is perfectly normal and healthy. You’re seeing the world clearly for the first time. That always upsets people.”

“I just wish that somewhere we’d find a place that isn’t run by an idiot.”

“If you want something like that, you need to do two things. First, put yourself in charge. Second, stop being an idiot.”

The farmhouse is a mess. Vagrants are all over the place. Poor, hungry people are huddled inside. 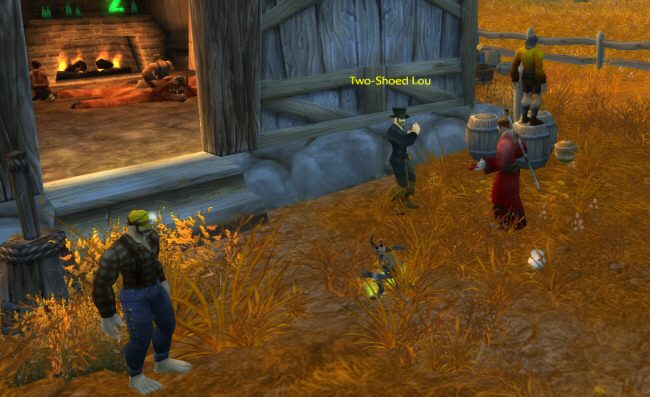 Norman greets Two-Shoed Lou, who proceeds to yammer on about murder and living in boxes and some crap about a conspiracy.

Suddenly Norman turns to me, “Hang on! Look at all these poor people. These are exactly the people I came here to help!”

“No, I mean all these other people,” he shouts. “This has been my problem all along. I’ve been working morons instead of going to the people who need help. Look at his place. It’s filled with poor homeless orphans! I lost sight of my goal when I started taking these quests, and got caught up doing all of this stupid stuff, when all I needed to do was find someone hungry and offer help.”

“Fine. Go ahead. Try to help them and see how far you get.”

“I will!” Norman says, as he storms into the dilapidated farmhouse. He meets the woman in charge of the place, Mama Celeste. She is only to happy to accept his offer for help. 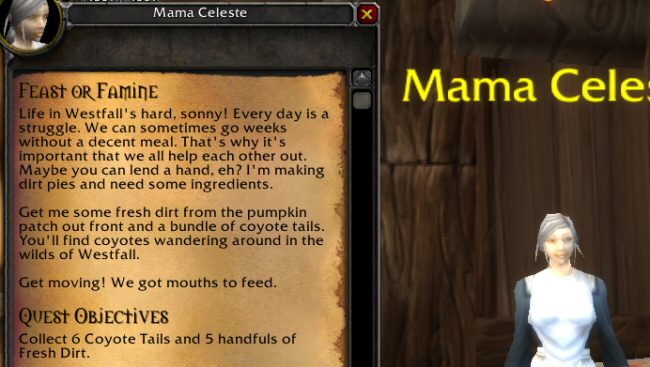 “Life in Westfall’s hard, sonny! Every day is a struggle. We can sometimes go weeks without a decent meal. That’s why it’s important that we all help each other out. Maybe you can lend a hand, eh? I’m making dirt piles and need some ingredients. Get me some fresh dirt from the pumpkin patch out front and a bunch of coyote tails.”

Norman looks out the door to the farmland outside … 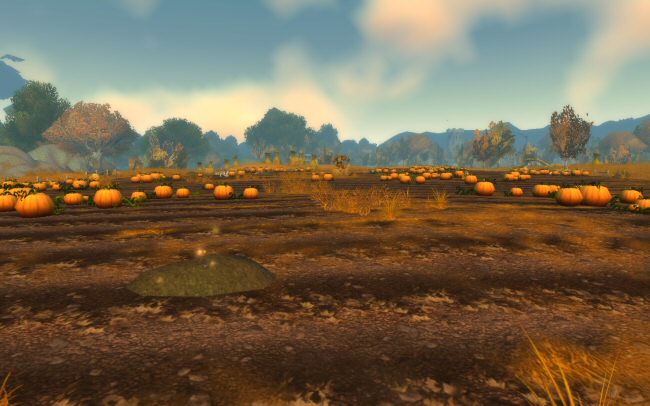 He looks like he’s going to be ill. “So your saying you want me to out outside, into the fields … “

“Where there are ripe pumpkins …”

“And gather heaps of dirt for you …”

Norman stops for another look out the door … 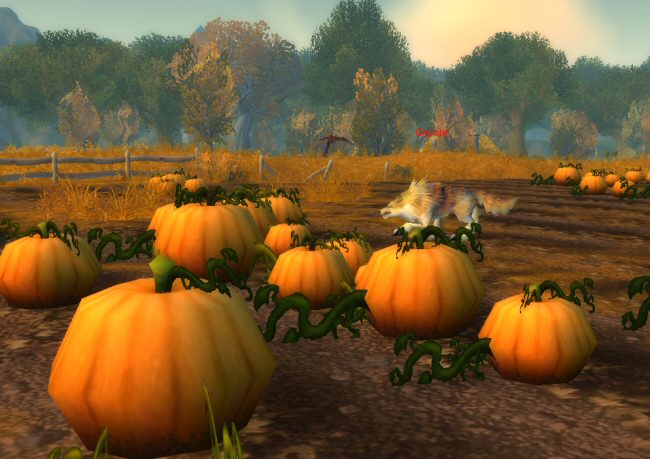 “And kill them, and cut off their tails …”

“And you want me to bring you those tails, so you can EAT THEM?”

“And you want me to leave the rest of the carcass to rot in the field instead of bringing it back here?”

“What would I do with a coyote carcass?” she asks in confusion. 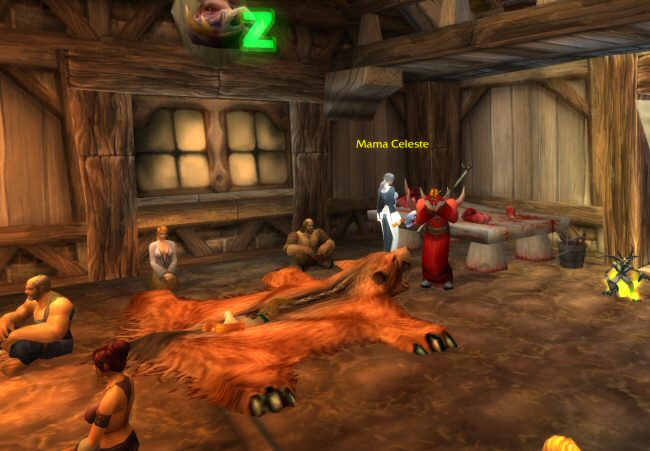 Norman begins blubbering, “I HATE being an adventurer!”

“I don’t want to help these people anymore,” he says at last.

Next Week: The end is coming!