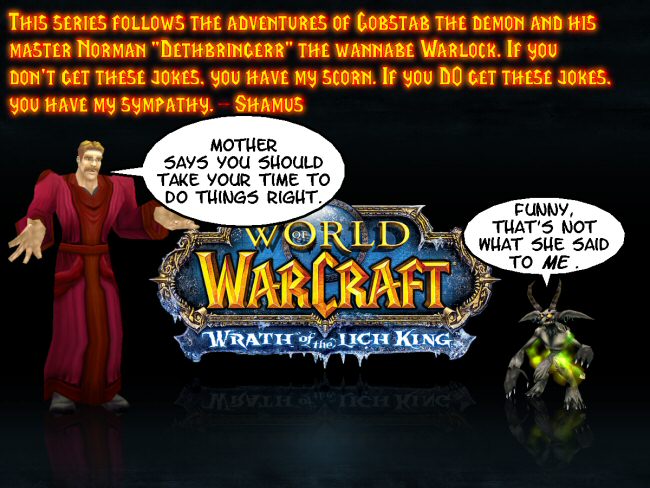 Master Norman has led us east along the road, looking for the landmarks that will lead us to the Jasperlode mine. 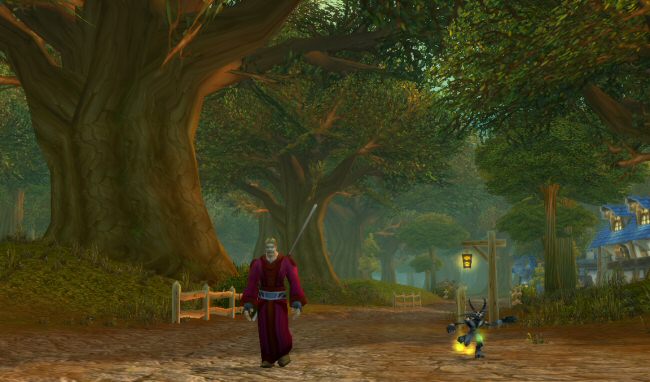 “We’re actually going to investigate this mine business?” I ask.

“You realize this is a huge waste of time, don’t you?” I protest.

Norman gives a halfhearted shrug, “Look, this is what the guards want us to do. They know what the people around here need. We have to help the people of Azeroth somehow.”

We hang a left off the path and plunge into the woods. A few minutes later we reach the bustling kobold city that the Marshal Dughan hilariously referred to as the “Jasperlode Mine”. 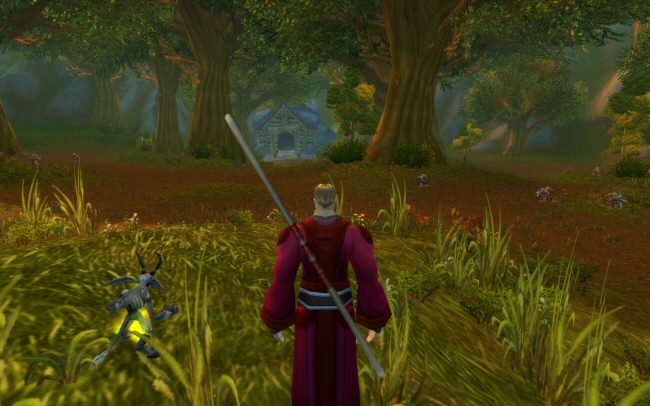 “Okay then,” I say. “I think we can safely say this place is overrun. Let’s head back.”

“We just did. It’s kobold central. Let’s go get paid.”

“We have to scout inside.”

“Just say we did. You know it’s just more kobolds inside.”

“Are you suggesting I lie?” Norman asks, offended.

“I would never dream of such OF COURSE I’M TELLING YOU TO LIE. What kind of advice did you expect to get when you summoned a demon? Besides, this is barely lying at all, anyway. You know anyone that goes in there is going to be up to their ass in kobolds in about three seconds.”

“I’m not lying to the Marshal,” Norman insists.

“This lie is for their own good. You’re telling them what they need to know. You’re doing them a favor.”

“Lying is out of the question! Now get in there.”

“This is completely stupid and pointless. I don’t see why we don’t just-“ 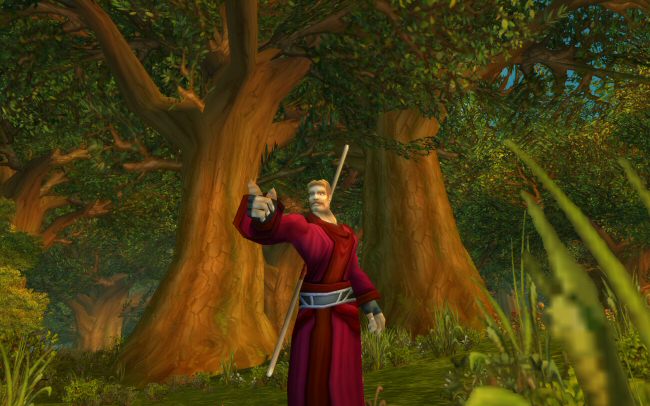 “AS YOUR MASTER, I COMMAND YOU TO-“

I charge in and heave some fireballs at the locals. Norman does his shadow magic stuff. It turns out that there are a lot more kobolds here than at the other mine, and these guys are a lot more ornery. Things go from bad to worse when I end up fighting three of them at once. Pretty soon I feel my demonic body coming apart. As I fall, I look backwards and see what Norman has been doing … 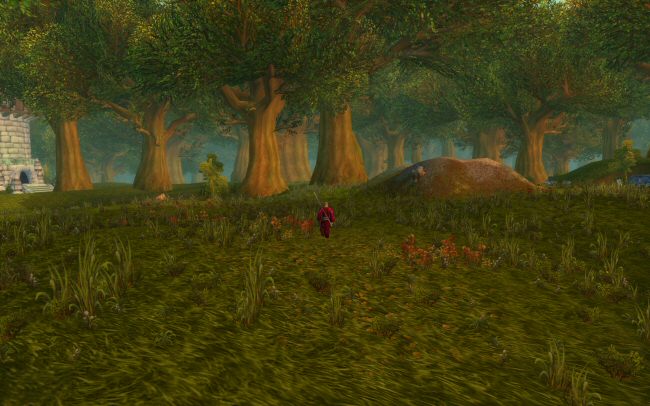 Of course, being immortal means I don’t die. I just return to the demonic planes. Which is something of a relief. I’m no longer two feet tall and feeble. I have just enough time to take care of a bit of business before I end up being summoned again. 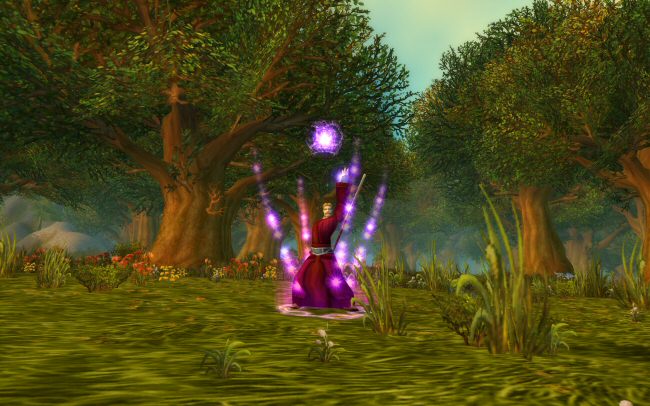 “Behold demon, you now serve the mighty Dethbringerr!” Norman bellows as I snap back to the mortal realm.

“Lucky me,” I say. “It’s Dethbringerr, the master of running off and leaving his companion to die. Long time no see.”

Norman tilts his head to one side, “Gobstab? Is that you?”

“You were expecting Archimonde?”

He looks confused, “Well, I … My warlock teacher told me you never summon the same demon twice. I mean, there’s like billions of demons so …”

“Yeah, funny thing, that,” I shrug. “Probably a fluke. Best not to think too much about it. Let’s get back to work.”

It’s quite a long walk back to the mines.

“Man, when you run away you don’t mess around,” I observe.

“Yeah. Those kobolds chased me for a long ways. They were mean little buggers.”

“Oh I’m sure I wouldn’t know anything about that.”

“Yeah,” Norman says guiltily, “I’m sorry about leaving you like that. When you died I thought I’d never see you again.”

“First of all, I didn’t ‘die’. I just lost my connection to the mortal realm. Which is not a bad thing. Second, don’t apologize to one of your own servants. It sickens me.”

“Right, right. No apologizing. Got it.” 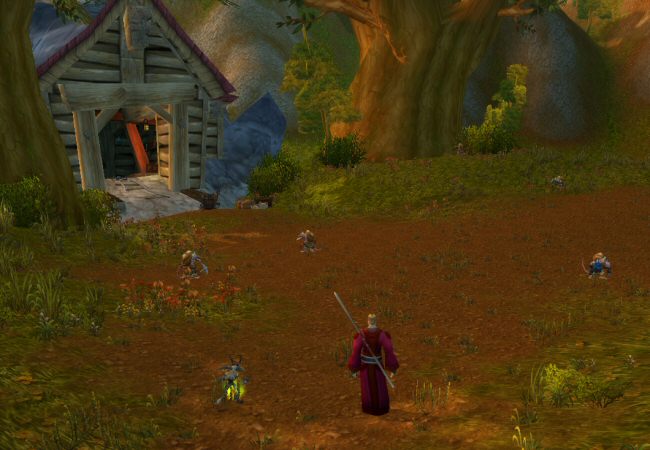 Back at the mines, Norman once again sends me into the fray while he hangs back. We make it further this time, but eventually we attract too many kobolds and Norman runs off and I get a free trip back home. Sure enough, a few minutes later…

“Gobstab? Again? This is uncanny. No. This is absurd. Impossible. This isn’t just random chance.”

“Yeah. Quite a mystery. Like I said, best not to think about it. Let’s get going.”

“No, as you master, I order you to tell me why you’re the only demon I can summon.”

“Nice try, but you can’t make me tell you about how the demonic realms work.”

“It’s not part of the deal. So suck it up. All you need to know is that we’re stuck with each other for the time being.”

Norman is really shaken by this. He’s suddenly aware that there are limits on how much power he has over me. He’s probably wondering what other limits there are. Or what secrets I might be hiding, and why. For the first time in his life he might be questioning the wisdom of striking deals with demons who are older, smarter, and more powerful than himself. But like all humans the feeling soon passes and he goes back to thinking he knows what he’s doing. 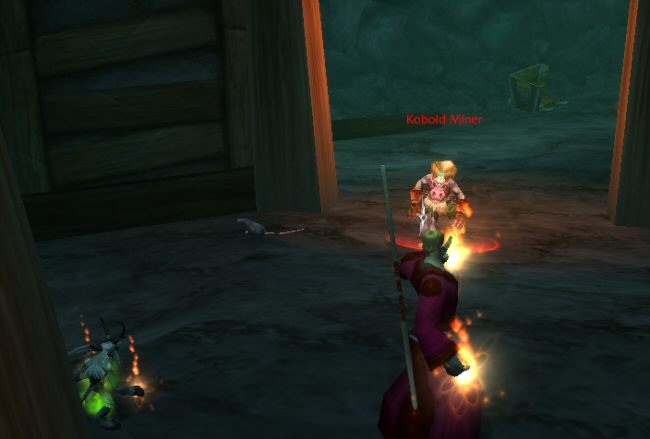 It takes us three more attempts at a frontal assault before we manage to scrape by the guards at the entrance and push our way into the mines where we find, to our complete lack of surprise, that the place is completely full of kobolds.

We kill a couple of the locals just for good measure, and then we head back to Goldshire, city of brave champions. 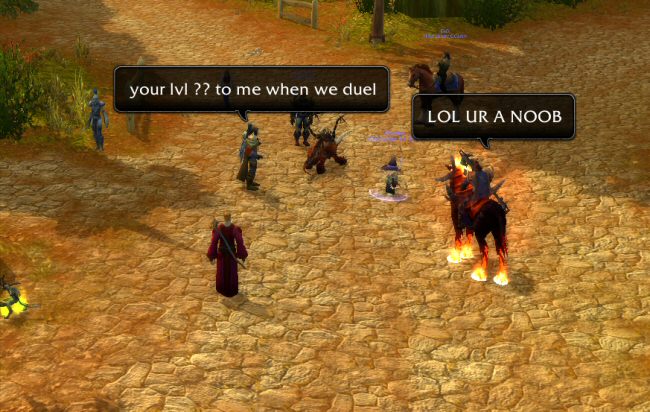 Marshal Dughan is upset by the news, “Kobolds at the Jasperlode Mine, you say? Curses! The situation is worsening by the minute!”

“So, I guess you’ll be increasing your patrols in that area?” Norman asks earnestly.

“But … what was the point of scouting the place if you weren’t going to do anything about it?” Norman asks. 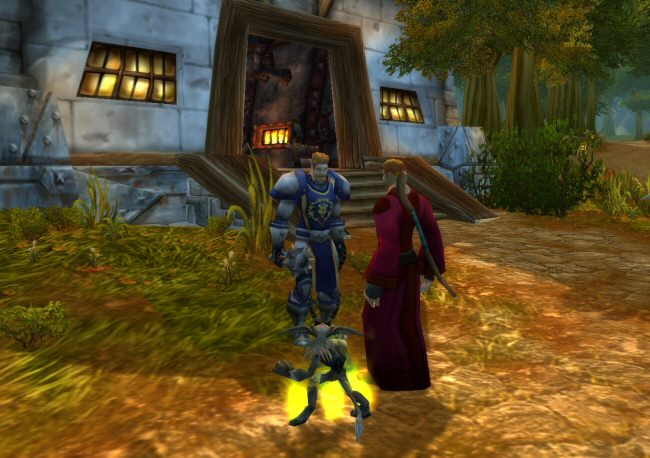 Norman looks around at the other guards loitering about town, “But … you’re not involved.”

Dughan gives another one of those little shrugs.

“That does it!” Norman shouts. I know what we’re going to do!”

And with that he marches us right out of town and to the capital city of Stormwind. 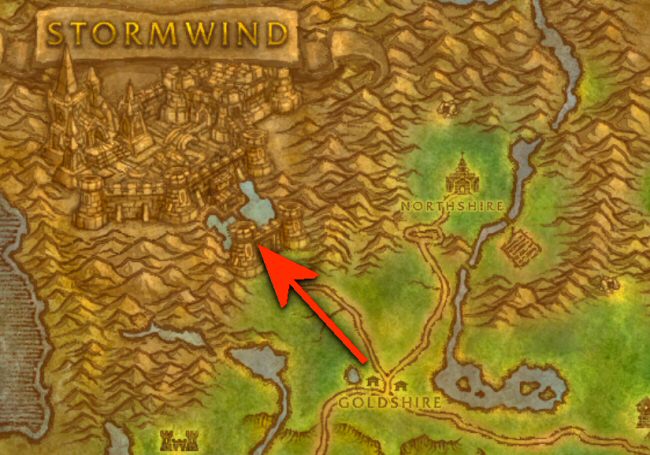 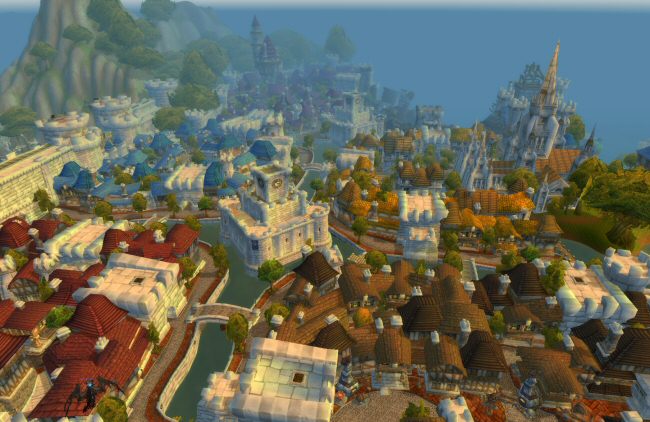 Note that this screenshot is from Cataclysm, which doesn’t properly start until next week. I’m showing it here for the benefit of readers who haven’t played World of Warcraft and don’t know what the city looks like.

There have been a lot of changes to Stormwind, but the biggest change is that fact that in Cataclysm you can actually view the city from above. See, back in 2004 it would have been madness to try and show a city this large and detailed. So the city was designed to limit visibility. Each district was surrounded by a wall, and there was a set of canals between them. The doors in these walls didn’t line up, which prevented you from looking out of your current district, over the canals, and into another district. This meant your computer would never have to draw more than one district at a time. It also meant the entire city was damned annoying to navigate. If you approached the city on a gryphon, the approach angles were set so that you couldn’t really look down and see the whole city.

The place has opened up a bit in Cataclysm, and it’s now possible to fly directly over the city. There are other, more destructive changes, but we’ll get to those next week when Cataclysm goes live.

“So why are we here, again?” I ask as we stroll into town. 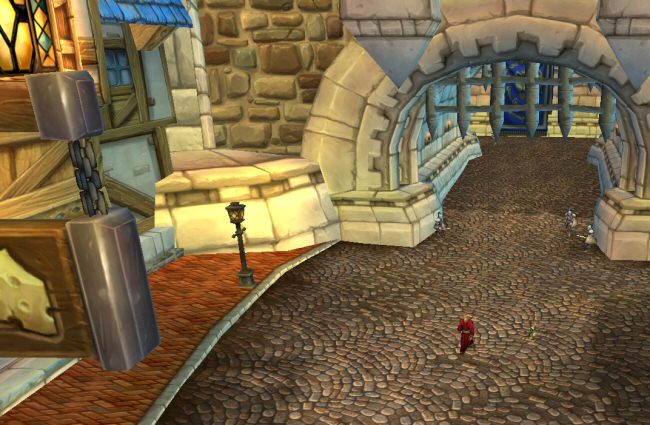 “I’m going to tell the authorities about the slacking guards in Goldshire!” he announces.

Norman leads us to Cathedral Square, at the heart of the city. There are some official buildings there, and he meanders from one place to the next, complaining loudly and getting nowhere.

Finally I can’t stand it anymore. “You’re wasting your time,” I tell him.

“Azeroth needs help, and those guards are doing nothing while kobolds multiply around them! Someone here is in charge of those guards, and when I find him-“ 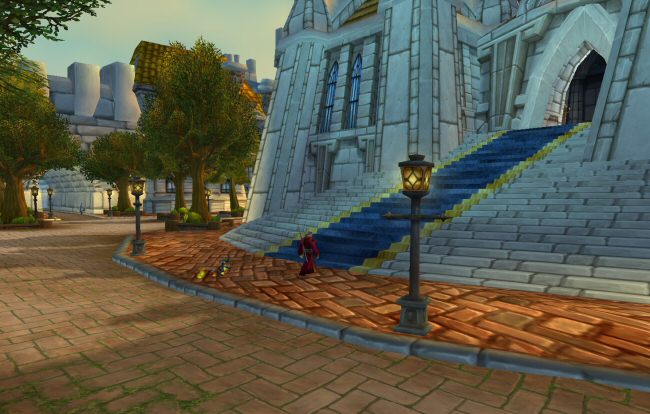 “It doesn’t matter. None of this matters,” I say patiently. “Look, pretty soon a dragon is going to show up and wreck everyone’s party. Until then, this is just a bunch of wanking.”

“Look, I’m not some two-bit chump summon. I’m the real deal. An important field-agent demon with a line on the secret happenings of the universe, and I’m giving you an insider tip: A dragon is about to kick your asses to Kalimdor and back.”

Norman is red with fury, “I’ve had enough of your lies! I command you to return to the abyss and let me summon a different demon!” 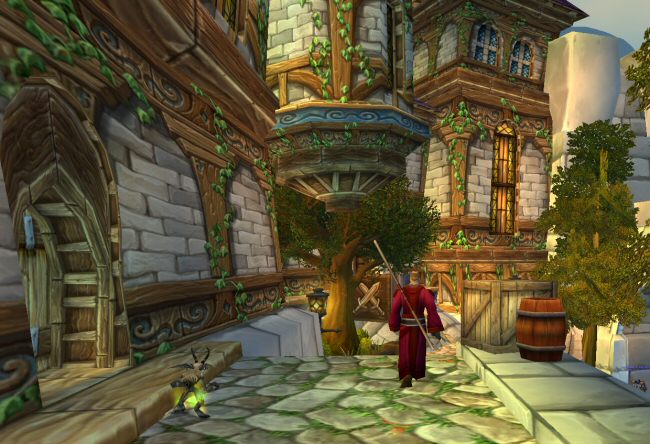 “What? You’re taking me to the Mage Quarter now? You think your amusing Mages can overpower the demonic realms with a couple of fireballs and some summoned water?”

“I’m going to the Warlock expert here in town. Maybe he knows what’s going on.”

I let out a long sigh. When the smoke clears, I tell Norman, “Okay. Fine. Here’s the deal: I’m from the Department of Infernal Damnation. I’m your assigned caseworker. No matter what you do, I’m the only demon you’re ever going to be able to summon.”

“Because you’re trying to use demon powers to serve the Lighttm. Maybe it didn’t occur to you that the Demonic Review Board might not appreciate that? You’re a priority case, and that’s why I got the job of orchestrating your downfall.”

“Then that’s my ass. I’ll be demoted and spend the next couple thousand years filing paperwork and getting coffee for the important demons. Metaphorically.” 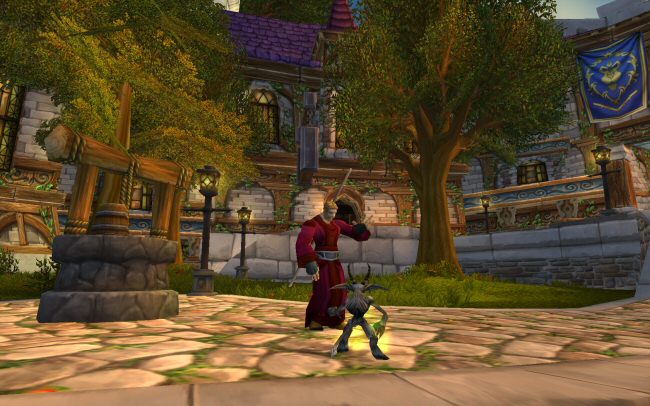 “So all I have to do is dismiss you and never call you again, and I’m safe?”

“You could do that, but you won’t. You need me. You never would have gotten this far without my help. What are you going to do? Abandon your country in their hour of need because of your selfish concern over your own soul?”

“You don’t get it. If I turned to evil, mother would kill me.”

“If you’re more afraid of your mother than demons, then your mother was either very bad, or very awesome.”

“I’ll be on call. Just remember me when things go sideways.” 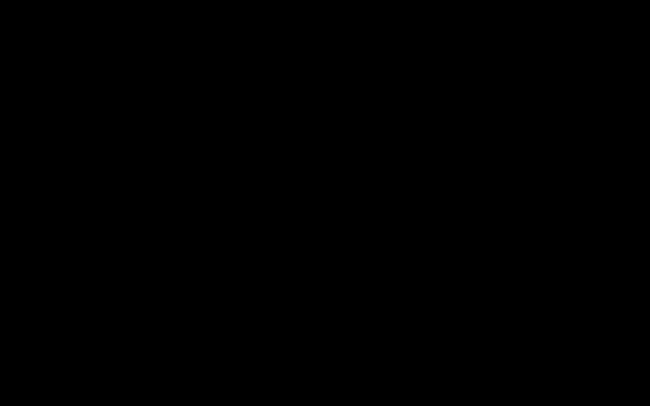 Next Week: THE CATACLYSM BEGINS!