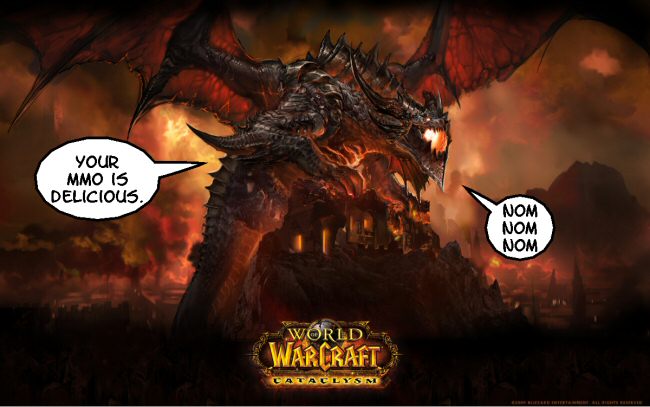 Boom. Mortal realm. I’m suddenly back in Azeroth, and once again knee high to a Gnome. 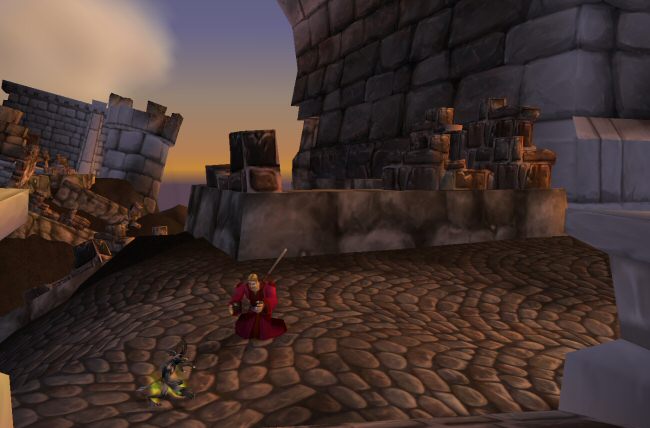 “Gobstab! Praise the Light! I need your help,” Norman cries. He looks like he’s seen some tough times.

I shrug, “I told you I’d be back. Although I’m one-hundred percent positive you shouldn’t praise the light when you summon a demon.”

Norman thinks for a second, “Would that be considered an insult to good, or evil?” 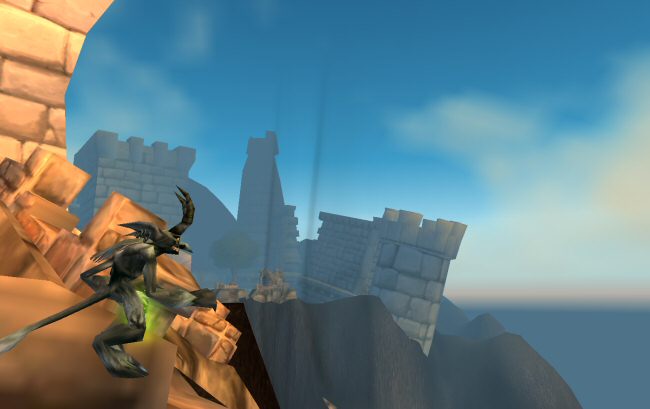 I look around at the tumble of burned, ruined buildings, “I guess it’s too much to hope that this is your doing?”

“Yeah. Deathwing. And for the record: I totally called it.”

Norman sighs, “I guess you did. But how did you know that a dragon was going to attack?”

“What? You think something like this could pop up without demons hearing about it? A lot of evil mortals were involved in setting him free. We saw this coming ages ago.”

“I guess you must be happy about this, then?” Norman says mournfully. 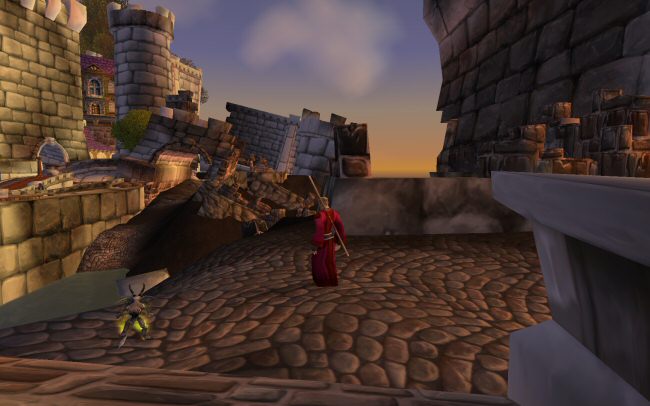 “Not as such. While we love seeing worlds destroyed, we prefer to be the ones doing the destroying. So Deathwing is kind of cock-blocking us, here. On the other hand, this disaster is going to be great for membership. You’re lucky you got into demonology when you did. A lot of peasants will be getting into it now that Deathwing has struck. Don’t even get me started on the huge backlog of Dwarven Warlocks we’re dealing with. But you … you got in early, and so you got me. These new Warlocks will get stuck with the newbie and intern demons.”

“Well, Deathwing has really done a lot of damage. Entire towns are gone. The place is in chaos. It’s terrible.”

Norman is surprised, “You seem awfully eager to go out and do good.” 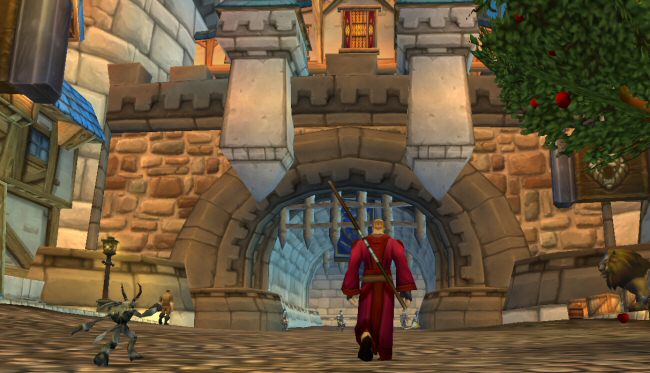 Norman leads us back out of the city, heading south to Goldshire. “Demons have meetings?” he asks at last.

“Sure. You can’t overthrow a universe without having a few meetings. And the pencil-pushers from Infernal Affairs are always dragging us field agents in for status reports.” 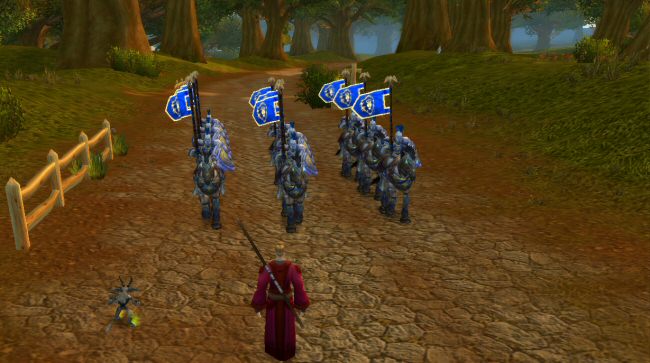 As we walk along the road, we’re nearly run down by a formation of guards.

“That’s new,” I say. “Looks like Goldshire finally got some soldiers.”

In Cataclysm, Blizzard has tried to fill the world out a bit more. There are more NPCs in the world, and many of them are now moving around and doing things, as opposed to standing around and waiting to be clicked on. It really does make the world seem more active. 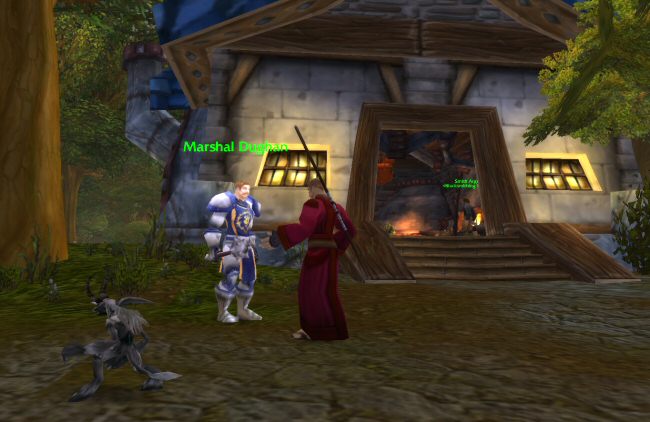 In Goldshire, Norman speaks with Marshal Dughan, “So … I notice that you’ve got a bunch of soldiers now? I’ll bet that helps a lot.”

Marshal sighs, “Yeah. I’d requested this detachment ages ago, and they finally arrived this week. But some idiot in Stormwind complained to every official in the city that we weren’t doing patrols. So then the powers that be sent us orders to do patrols. So that’s what the new units are doing. I’ve got them marching up and down the road all day.”

Norman looks a little pale, “But … but if there’s a problem … Like, if someone needed help around here, you could send those soldiers to help, right? Like, what about all the gold mines full of kobolds?”

Marshal shakes his head, “No. They would have to stop patrolling to do that. I’m under orders to be doing patrols from now on.”

We trudge off into the woods. I can hear Norman sniveling as we walk.

We head deeper into the woods. There are, of course, kobolds here, but also huge bears, robbers, and pony-sized spiders. We give those guys a lot of room. 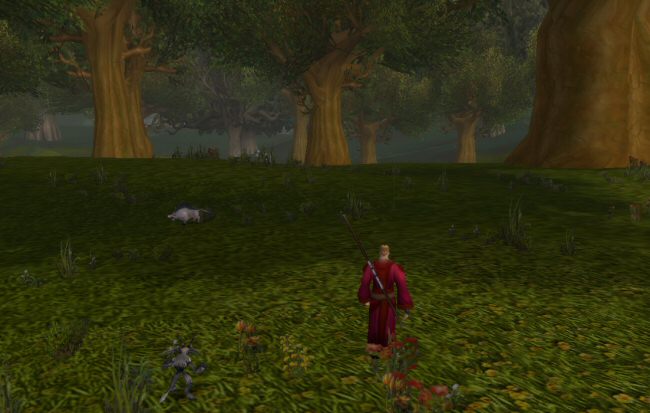 Eventually I speak up, “Look, I’m just a simple immortal demon, filled with hateful schemes and malice. I don’t pretend to understand your fancy philanthropic ways. So explain to me what we’re doing here in the ass-end of the forest?”

“Well …” he says as if he really hadn’t considered the question until now, “I guess the best way to help the people is to just go to them directly, you know? Just ask around and see what people need.”

“Naturally I object to this plan on moral grounds. As in: It’s moral, therefore we shouldn’t be wasting our time with it.”

“But I also object to this plan on practical grounds, because there aren’t any people around to mooch help off of us.”

Norman points through the trees to a few rustic buildings in the distance. “Farmland,” he says with a nod. “Good folk. Decent folk. I’m sure the recent troubles have placed burdens on them, and they’ll be grateful for our aid.” 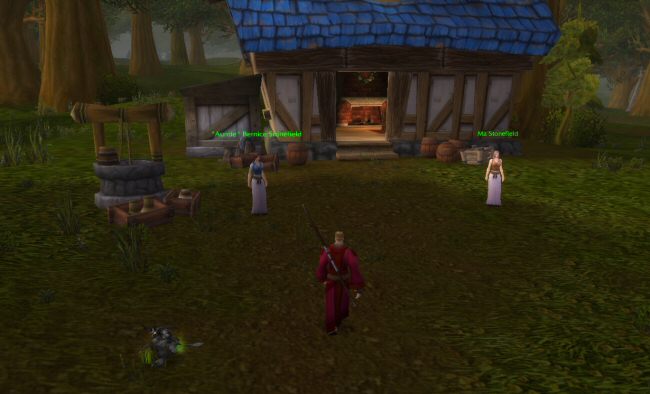 We come upon one of the worn but well-kept farmhouses. There are a few humans milling about the place. Ma Stonefield and Auntie Bernice are in front of the house. Grandma is inside. Pa is nearby, selling his produce. Other family members are at the edges of the property, probably trying to not get eaten by bears or spiders.

“Small house,” I add dryly. There’s no door, and we can see inside.

“Well, they got a … cupboard over there,” Norman points.

“Nice. You think it sleeps five?”

“This just proves my point,” he says testily. “These people are obviously destitute. Imagine the hardships they must be going through, given the recent troubles. War always hurts the lower class first.”

“It’s a shame,” I say. “Stomping the peasantry is the best part of war, but it’s always over so quickly. Then all you have left is mop-up with the nobility, and that’s always so boring.”

“Hush up. Let me do the talking,” he says as we approach one of the ladies in front of the house. 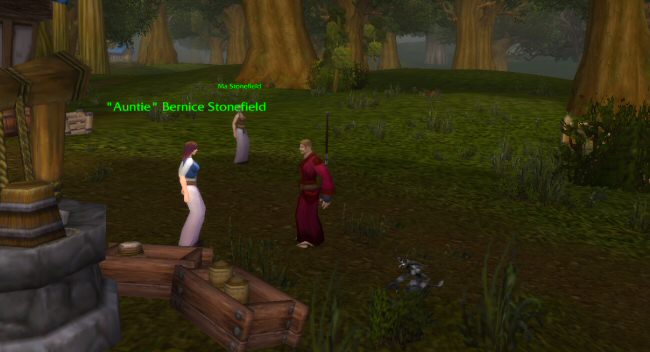 Norman puffs out his chest, “Greetings madam! Do you need help? Are you in danger? Don’t be shy. I wield mighty magic and my … friend … here is also quite skilled. Tell us, what is your trouble? Wolves? Spiders? Robbers? We’ve seen these and worse in these lands, and we do not fear them. We’re here to make things right in the land.”

“Oh! I’m so glad you’re here! I need your help!” Bernice cries. Norman looks down at me and gives me a smug I-told-you-so nod.

“I can’t find my necklace and I think that guttersnipe Billy Maclure took it!”

“You … a necklace?” Norman stammers. He looks around the bedraggled farm and out over to the spiders and bears prowling on the edges of the land. Then he looks back to the ramshackle one-room house. The boss can’t very well refuse the girl after that big intro speech, but taking this job is like summoning the will to swallow a bug.

We learn that there are really only two farms in this area. The Stonefields and the Maclures. The two families hate each other. They have a long-standing feud going, and trade petty injustices on a regular basis.

We stroll over to the Maclure farm and find billy standing just outside the barn. Norman puts the question to him. 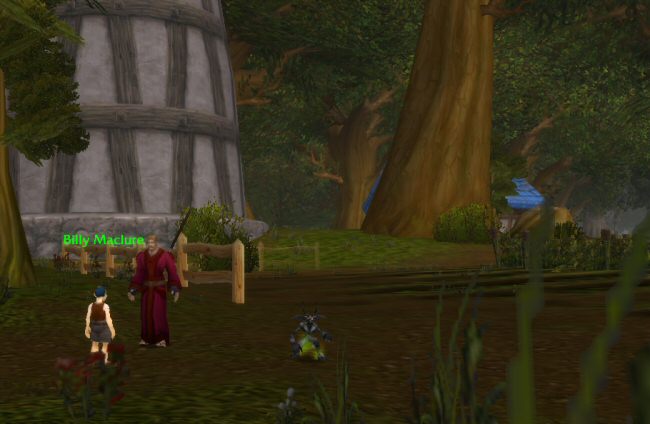 Billy gives a mischievous grin as he explains his side of things, “You lost a what? Well I didn’t take no necklace, because I ain’t no thief! I might know who did but I’m too hungry to remember! Maybe if I got a pie, I could tell you who has that necklace. And you know, I think that old Bernice lady at that other farm makes great Pork Belly Pies … ”

Norman is adamantly against my suggestion of simply roasting the kid. Instead, he marches us back to the Stonefield farm and asks Bernice for a pie. She sends us out to get some hog meat. Five pieces of hog meat. 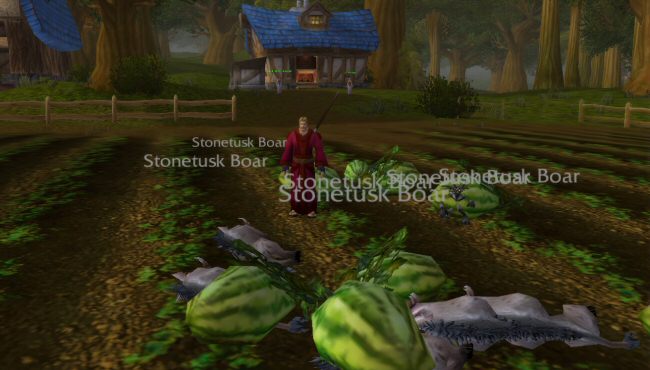 “So did Bernice really want you to slaughter her entire supply of boars?” I ask sometime later.

Norman scratches his head. “It is a little strange, isn’t it?”

“Aren’t we gathering meat to make one pie? For a child?”

I shrug, “Well, there’s nothing left to do but leave her entire herd of slaughtered pigs in the middle of her watermelon patch to rot so we can give her this meat for the extortion pie.”

“Wow. It sounds evil when you say it that way.”

“I guess we have enough to make the porkbelly pie now.”, Norman says.

“Porkbelly pie? Is that what we’re making? Why aren’t we taking the bellies out of these pigs, then?”

“From the sounds of it, I don’t think Auntie Bernice is either.” 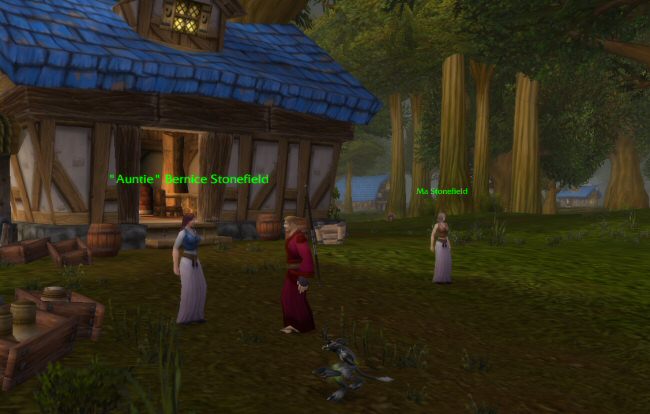 We return to Bernice. Who is actually just about twenty paces away and who doesn’t have anything to say about the extermination of her livestock. Norman hands over the meat and she whips up a pie. Then we trudge back to the Maclure farm and deliver it.

Billy begins scarfing the pie with his bare hands. He consumes it right in front of us while we wait. 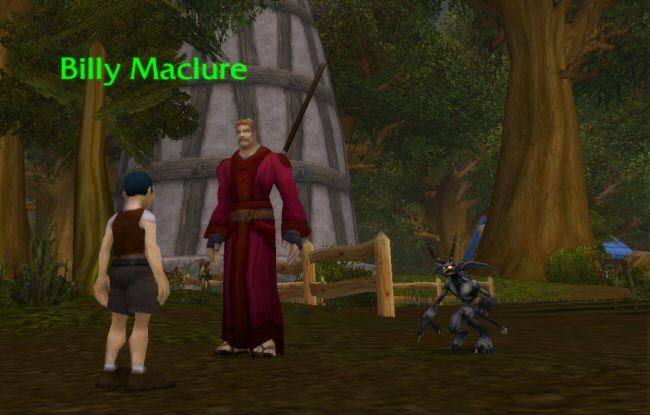 Once the messy, noisy business is all over Billy belches, “Mm, yum! This pie is the best! I think my memory is coming back to me. Yeah! I was playing near the Fargodeep Mine, and I think I dropped, er … I mean I saw, the old lady’s necklace. Don’t ask me how it got there … it wasn’t me! Anyway, I saw this big, gold-toothed kobold pick up the necklace.”

The kid points us to a kobold camp right near his home. When we arrive we find an unusually large and feisty kobold. 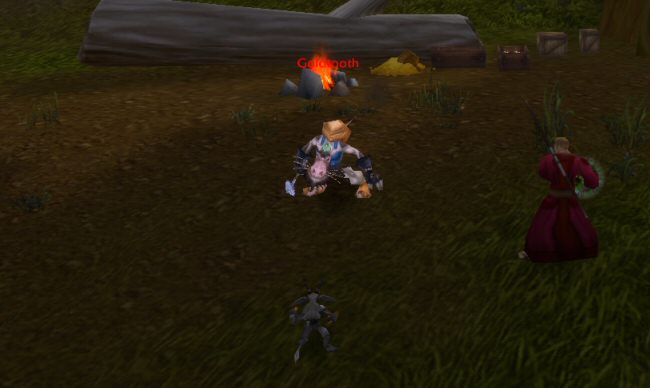 We roast him and reclaim the necklace. Then we return to Bernice.

“Oh, you found it! Thank you, thank you dear!” she cheers as Norman hands over the scorched necklace, still glistening with the juices of flash-fried kobolds.

Norman gives a modest bow. He leads us away, whistling a happy tune.

“What are you so happy about?” I ask.

“We finally made a difference! Don’t you feel the least bit happy about that?”

“Me? I’m ecstatic. This has been our best job so far. I just don’t understand why you’re happy. Are you finally willing to admit that evil is more fun?”

“Come on. We helped a widow recover an heirloom necklace. How could you call this evil?” 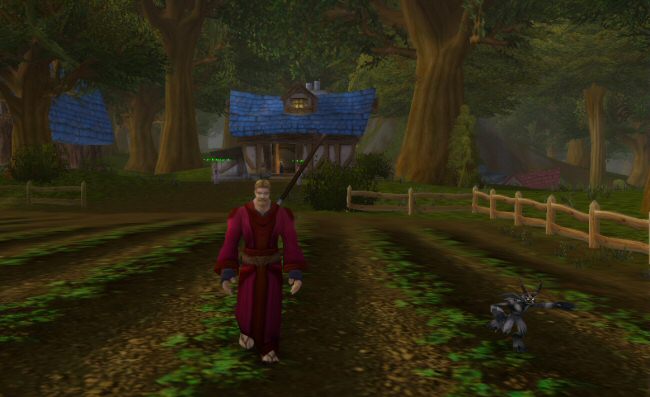 “You continued and perhaps even intensified a long-standing feud between two families by helping a little boy extort the Maclure family, which resulted in the death of most of their livestock, all so you could recover some gaudy jewelry to satisfy Bernice’s vanity. Killing the kobold who had nothing to do with it and leaving Billy MacLure unpunished was just gravy.”

Norman stops whistling. Then he stops walking. His shoulders sag. His mustache seems to droop into a frown. He’s quiet for a long time.

“So!” I say enthusiastically, “Who are we gonna help next?”

Next Week: This feud isn’t going to incite itself, you know.