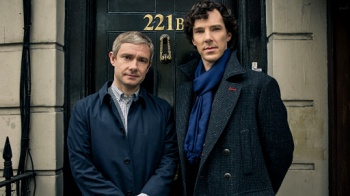 Sherlock’ fourth season will be comprised of three episodes, with a one-off special set to air before the new season starts.

Already miss BBC One’s Sherlock? If you do, then you’ll be glad to know you’ll be able to see the detective duo before its fourth season officially starts. Show writer, executive producer and co-creator Steven Moffat had the following to say:

A special, plus a new series of three episodes – it’s a record-breaking run! Of course, it’s far too early to say what’s coming, but we’re reasonably confident that the very next thing to happen to Sherlock and John, is the very last thing you’d expect,

Fellow co-creator, writer and also executive producer Mark Gatiss also chimed in for the hit TV show, and mentions “the game is on — again!”

“Series Four! At last ! It’s always special to return to Sherlock but this time it’s even more special as we’re doing … a Special! Not only THAT, we’ll then be shooting three more episodes which will take Sherlock and John Watson into deeper and darker water than ever before. The whole Sherlock team are terrifically excited to return for four new adventures. The Game is on – again!

Unfortunately, the actual shooting of the Sherlock one-off special will begin no sooner than January 2015, with season 4 shooting later in the same year. This was announced over on BBC One’s Twitter, which you might not want to read further unless you’ve finished season 3 since there’s potential spoilers afoot.

Again, just in case you didn’t read what I mentioned earlier, stop reading further if you haven’t completed season 3 since the tweet below might spoil the ending for you. Still here? Good. In the season 3 finale, Sherlock’s long-time archenemy Moriarty had his face plastered all across London and asked the detective “Did you miss me?,” which might have been fine except Moriarty shot himself in the head back in season 2.

Now, while the wait might be torture for some, at least there’s special to placate fans, and a definite date this time compared to season 3, which left a lot of fans waiting on when it was set to air. What do make of season 3’s ending and what do you surmise will happen in season 4? Let your inner detective plot it out and share with us in the comments.

Jerry Bruckheimer: Pirates of the Caribbean 5 Won’t Have Demonic Monsters