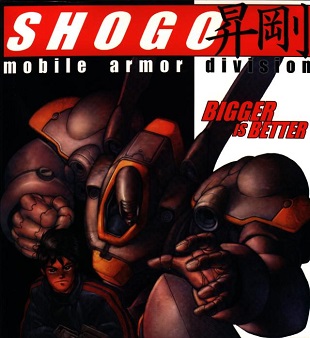 As we meet the middle of first person shooter month we take time to look at the anime-inspired Shogo: Mobile Armor Division.

I launched into Shogo: Mobile Armor Division not just wanting to like it but actually almost predisposed to. While my appreciation for anime has somewhat declined over the years, I’ve had a long running love of mecha that gave the game an instant in with me. Sadly, whereas the Toonami fare of the early 2000’s were something of a revelation for my adolescent self, Shogo wound up landing more in “meh” territory.

Don’t get me wrong, there are things, especially stylistically, that Shogo does well. The environments are bright and colorful and the anime aesthetic does lend it some uniqueness. The sound, additionally, was a big plus for me. You probably won’t get the full effect unless you’re already a fan of Robotech, Gundam, or any of the other legacy series involving militarized robots, but a lot of the smaller sounds are ripped straight from those classic shows.

The gameplay also tries to do some interesting things, namely splitting the game between mech-based levels and stages fought on foot. I liked how it let you choose between one of four different mechs to pilot. I also appreciated that your arsenal changed depending on the type of level you were playing. You get the sense from the get-go that someone made this game with a real vision in mind.

The problem, unfortunately, is that for all that Shogo does right, it also does a whole bunch of things wrong.

The on-foot levels, for instance, bounce back and forth between being underwhelming and annoying. You’ll spend the bulk of your time in these stages gunning down crowds of the same boring enemy types that are recycled and re-used by every faction in the game. None of these guys are particularly dangerous on their own and, as long you exercise some basic FPS caution, they’re relatively easy to blast through. That is, of course, unless they get lucky.

Occasionally, your enemies will land a “critical hit” against you that, essentially, amounts to an instant kill. To be fair, you also have this ability and I’ll confess to even appreciating it at times, especially the fact that it restores a bit of your health. That said, its occurrence is random and I wound up on the receiving end often enough that the cons rapidly outweighed the pros. It is a bit hypocritical, I suppose, to begrudge the fact that my foes have the same capabilities that I do. When it results in numerous, cheap-feeling deaths, however, I can’t help but feel that the game would be stronger without it.

It should be mentioned, of course, that these this mechanic occurs in the mech levels as well. In fact, it’s almost worse there thanks to the additional threat of splash damage which is both overpowered and more prevalent due to the explosion-heavy nature of robot combat. I have to admit though that it honestly didn’t bother me as much in these portions.

Some of the reasoning is mechanical. You can understandably take more damage in your mech than you can while playing as a mere meatbag. There is also the option of choosing machines with thicker armor giving you even more survivability. Even with some of the added threats, you’re just naturally going to die less when you’re hulking out in your giant murder machine. Beyond that though, I’ll confess to letting my biases lead to some perhaps undue lenience when it comes to Shogo‘s mech elements. Put shortly, there was a time in my life where I pretty much loved any game that let me ride around in a giant robot. Heck, at one brief point, I would have proudly named Mobile Suit Gundam: Journey to Jaburo (a clunk fest if there ever was one) as my favorite game. Even years later, it would seem I haven’t completely grown out of that.

Even if I can naturally forgive some of the problems with Shogo‘s mech gameplay, there are some elements that really disappointed me. The ability to choose mechs, for instance, is not as beneficial as it should be. It’s nice to have the option, for sure, but you never really have enough time to become comfortable with all of the different machines at your disposal. Not that it particularly matters because, outside of having more or less armor, I couldn’t really discern much useful distinction between the four available models. The lighter mechs are supposed to be faster, but when a good portion of the areas you’ll be fighting through are narrow city streets, that speed doesn’t really help much.

It’s not like the heavy models are slow plodding behemoths either. In fact, no matter which one you choose, you’ll generally be just as maneuverable as you are when you’re zipping around on foot. This might sound nice, but it was actually a tad distracting at times. When I imagine piloting a giant robot, I picture helming something with a bit of oomph in its step. The mechs in Shogo, comparatively, don’t feel much different from walking around as a regular person. This certainly makes it easier to transition back and forth between the various level types, but it robs the game of some potential immersion.

And trust me when I say that it doesn’t have very much to spare. For all the effort the game puts into some aspects of its mecha, it utterly fails when it comes to its grasp on scale. I just never felt all that big when I was piloting a mech. Granted, Shogo doesn’t feature any machinery on the magnitude of Pacific Rim. Still, when your presumably heavy war machine can jump onto the roof of a building and then walk along a ledge that looks barely big enough for a person, it kind of kills the epicness. I was just frequently left feeling less like an armored giant stomping through city streets and more like a kid moving an action figure around a set of miniatures.

In spite of all these flaws, I could, theoretically, have found a silver-lining if the game’s story were good. Unfortunately, Shogo takes all the wrong lessons from its anime origins, presenting players with a convoluted three-way conflict that’s poorly explained and force fed to the player primarily through text in-between levels. The protagonist is unlikable and his connections to the rest of the cast aren’t fleshed out enough. Let me sum it up like this; toward the end of the game you’re presented with a story shaping decision. You can go one of two ways, either of which will completely change the ending. I might as well have flipped a coin for how much I cared.

In the end, Shogo: Mobile Armor Division was a pretty big let down for me. Who knows? Maybe if I’d had a chance to play its multiplayer that might have won me over. That said, however, I highly doubt it. At best, all Shogo has to offer is a unique concept that it squanders on an utterly un-engaging story and mediocre gameplay. It only costs $5.99 at GOG, but the site has far better games to spend that money on. Do yourself a favor and try one of those instead.

Next week we celebrate Far Cry’s 10th birthday with a look back at the game that started the franchise!