It’d be an understatement to say that Civilization: Beyond Earth was a concept that excited many a franchise fan, but the execution left much to be desired for some of us. The team updated Beyond Earth aggressively after launch, and I think the game has become something far more than it was at launch. The problem being, of course, that it’s virtually impossible to recover from a bad launch. So, Firaxis has done something that does work; make the next game the best game. 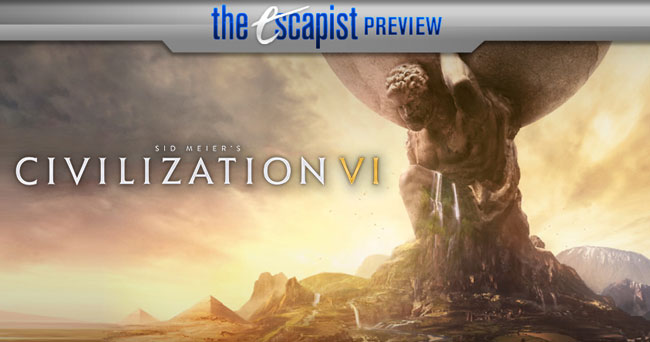 I’ve been playing Sid Meier games since I was 12 years old, give or take. In recent years, I’ve seen XCOM resurrected and Master of Orion given new life in a new age of gaming. Civ VI reminds me of what a new Civ might look like, if it was based on the versions from the 90s. When you go to the top-down Strategy view in Civ VI, the map starts to look much like an early Civ game. The borders are rough, units and structures are hand-drawn sketches, instead of living models. It’s not retro graphics, per se, but it’s minimalist modernization that keeps the original feeling intact.

The Fog of War uses a very similar scheme, in fact. Areas you’ve explored, but can’t currently see, have a layer over them typically called Fog of War. It’s sometimes completely opaque, hiding even terrain features from view. Other times, it’s more transparent, as in Civ VI, where you still see all the features, resources, and terrain through the fog of war, though the Fog of War illustrations take on the same hand-drawn aesthetic as the Strategy View. It may be the best I’ve seen at invoking nostalgia for the older generation of gamers, without sacrificing what younger generations have come to expect.

Civ has never really been about graphics, of course, rather the depth of strategic gameplay is where Civ has always stood above the crowd. Ironically, Civ VI might be the simplest one to play, despite having more depth than any Civ to date, at least at launch. There are a handful of major changes that are impossible to miss, but it’s the abundant smaller tweaks that you hardly notice that really make the difference. Wholly new mechanics are still great to have, of course, and we see one of those in the District system for city building.

In the past, you’d build every building in every city, more or less. Historically, every city had a Library, University, Barracks, Stable, and so on. Districts force you to specialize to some extent, however, which creates so many new branching paths, it’s likely the single most impactful change since they eradicated superstacks. Cities can have a limited number of Districts, based on the population, so you’ll never be able to build a Commerce building, a Military building, and a Science building in a fledgling city with a small population. As cities get larger, you’ll eventually be able to add more and more districts, reducing the specialization, but it will change everything about expansion strategy. You’re not just building within your city tile, either.

Districts and Wonders will be built on tiles you control, rather than within your city center. Both can have restrictions on placement, so, for example, you’re not allowed to place the military district, Encampment”, adjacent to a city center. Similarly, your Colossus will naturally need to be placed on a coastal tile.

The City State system has been vastly improved, with a single screen providing you everything you need for every City State. In fact, I think the UI in general is where your most subtle-but-meaningful adjustments were made. It will be incredibly jarring for veteran players, but they’ve almost completely removed the City Screen, in favor of a simplified interface. It was an absolutely elegant solution, too, as the small City Frame you do interact with somehow manages to fit everything you need into very little screen real estate. You can still micromanage your citizens, purchase tiles to expand, and perform every other function of the old City Screen, but it reduces clicks and transitions between the map and City Screen. As I said, it’s a small change, but even just saving a couple of seconds here and there helps give the feeling of constantly moving forward.

Diplomacy still plays a substantial role, though the preview build seemed a tad off, with other civs denouncing me as often as they could for reasons that didn’t always make sense. I had Teddy Roosevelt declare war on me at one point. During the game I was playing Teddy Roosevelt. “You are your own worst enemy,” indeed. That said, it is a preview build, so I’ll reserve any real judgment until I see what the final product turns out to be. At the least, Civ VI provides more information than before, and clarifies some of the diplomatic interactions I’ve been fuzzy about in the past. For example, it gives you an idea of how much you’re going to irritate the rest of the world by declaring war on another civ. If you have a good reason, your Warmonger penalty is reduced, or removed entirely. If you’ve denounced your enemy, you can declare war with a bit less outrage from the international community. Of course, you can always declare a surprise war, as long as you don’t need any friends, as they’ll all turn on you fairly quickly. It’s also a bit more transparent about why people don’t like you, and, as you develop relationships and/or spy networks, you can start to learn the actual mechanics behind each leader’s decision. “Doesn’t like civs that attack City States,” for example.

There’s a plethora of changes I haven’t been able to get to, and I’m sure plenty more I have yet to discover. I’ll get to as many of those in the upcoming review as possible, of course. This is a preview build, and it is flawed, but I’m getting more and more certain that this will be the best Civ game this century.