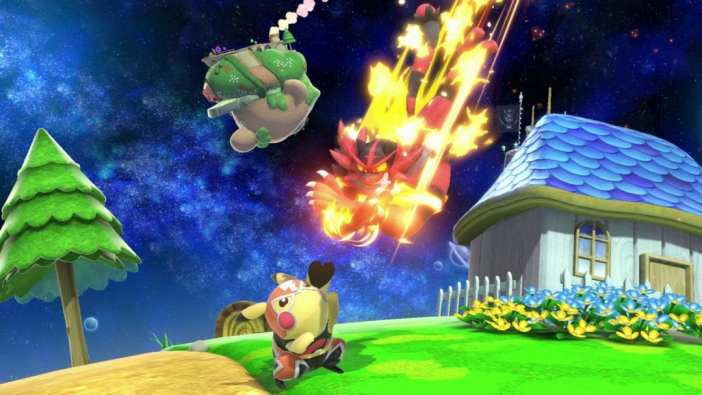 We’ve played a lot of Super Smash Bros. Ultimate in my house this past couple of weeks. It’s been a game that both of my boys have been anticipating for the better part of the year, though not in equal measure. Where my youngest son Micah was merely eager for the game, his older brother David was in full pre-launch hype mode.

In the weeks leading up to the release, David put forward a campaign to advocate for the idea that he could have a day off from school when Smash came out. The parent version of me felt obligated to rebuff the suggestions and encourage a responsible approach to playing a new game. The long-established gamer side of me suggested that the parent side of me was being an unsympathetic tool.

My position was all the more tenuous because I was already planning to take that exact same day off from work to play the latest Path of Exile league, Betrayal. Now, I can make a lot of qualifying points here about how I have extra vacation days stored up that I lose at the end of the year if I don’t use them, and that I’m pretty damn good at my day job while the quality of David’s grades can incline me to pinch the bridge of my nose and take deep breaths before speaking.

Still, it was hypocritical and illustrates nicely how much it sucks to have to practice what I preach.

With kids who are 15 and 10, I am now being called out on my BS with both troubling consistency and unnerving accuracy. It kinda sucks, honestly. I had gotten very used to having small children who simply don’t recognize hypocrisy even when it’s obviously in the other room playing video games well past a reasonable bedtime. There are a lot of challenging and frustrating things about parenting very young kids, but one of the great things about it is that they are very easy to fool.

It doesn’t feel so long ago that my kids were preschoolers and I could hand them a controller that didn’t even have batteries in it and convince them we were playing together. I don’t know what they thought the controller was doing or what relationship existed between their spasmodic button thrashing and what was happening on the screen, but they beamed with excitement and enthusiasm. Meanwhile, I got to keep building my Forza Horizon 2 career.

The problem with kids is that they wise up. I had just enough time to evolve from a terrified new parent completely unprepared to the task laid before me into a semi-sophisticated dad with a bag of tried and true parenting tricks, and then suddenly my oldest starts with the “Hey, wait a minute, this controller isn’t even on” shtick.

It’s like one of those thought experiments that ask “Would you go back to being in middle school if you could retain all your current memories and knowledge?” The answer, of course, is, “Oh my god, no nonononooonoo!” But, if pressed into this infernal service, you do suspect you’d crush it this time around. That’s what it’s like to learn all your great parenting tricks at exactly the same time that they stop being particularly effective.

I think it might be why people so often have that second or third kid. “This time,” they think, “we’re gonna crush this parenting thing!” Then they high-five and possibly do other things that they hopefully will not come to regret.

There are a lot of things I can’t or don’t do anymore; not because I’ve made a good moral choice about how to comport myself, but because if I did it my kids would call BS. Looking at my phone at the table while we’re at a restaurant is a good example.

When it’s just my wife and me, we will spend 10 minutes in quiet conversation, largely discussing how quiet things are when we don’t have kids with us. Inevitably, in the sublime chill of the moments after we’ve ordered and are still waiting for our food to arrive, ideally with the company of a nice cocktail, we will both pull out our phones and enjoy a brief and illicit look at these machines we’ve otherwise forbidden our kids to use at any and all dinner tables, even if it’s the one at the Chili’s by the mall.

When I hear gamers with children talk about only being able to play video games after the kids are in bed, I know that’s a true but incomplete statement. It’s only after kids are in bed, that we parents can act like kids ourselves. What my boys don’t seem to realize — or more terrifyingly, perhaps, do— is that I want to binge games every bit as much as they do if not more. I have 45 years of experience building up endurance for serious games binging. I’d wipe them floor with them in a games binging competition. They’d see binging like they can’t imagine.

But, I (usually) don’t. The way I try to look at this is that I want to set a good example. The more accurate take is that I hate being called out for blatant parental hypocrisy. Every time it happens, I feel like I’m going to look slightly left and see Severus Snape standing there with that constipated expression and disapprovingly say, “minus 50 points from Gryffindor.”

Seeing my double standards exposed backs me so quickly into the corner of having to say things like “because, I’m the dad” or “I said so” or “I’m the one who works 40 hours every week to pay for your phone, mister, so you better just blah blah blah.” And, yes, kids hate to hear that, but I do look back more fondly on all the times my parents said that to me growing up because I now know it secretly meant I had won whatever argument we were having.

In the end, we reached the agreement that we would set Friday morning aside as a doctor’s appointment day where we would all finally go in and get our flu shots and, for the kids, any outstanding booster shots they were behind on. Then, yes, they could have the day off from school to “recover.” The lure of an afternoon of Smash Brothers proved the perfect enticement to make that usually nightmarish escapade a smooth adventure.

As for me, it was a good compromise that I could live with and still come off as being a fair-minded parent who understands that sometimes it’s OK to burn a day on a game you’ve been looking forward to. You just have to earn it — at least a little. But, perhaps most importantly, I got to binge the hell out of some Path of Exile and no one called me on any hypocrisy. If that’s not a win, I don’t know what is.