You have to give credit to The Originals. Steve McQueen, Ferrari, Coca-Cola and the straight razor all have a special place in my heart. Sure, the newer models are flashier, more fully functional and, perhaps, better, but The Original is where it all started; the inspiration for the new. Without them, we’d still be sitting on our hands wondering why nobody had ever thought of driving fast, looking cool or shaving.

So when I heard somebody was planning to make a movie out of Beowulf, I suppose part of me was filled with glee. And part of that glee was distilled from finally being able to wash the taste of that stupid Antonio Banderas version out of my mouth. The other part was the celebration of The Original.

Beowulf is one of the oldest stories in the world. And while not the oldest story, it’s still up there. It tells the tale of a Scandinavian warrior named, of course, Beowulf, who helps his buddies in Denmark out with a little problem involving a hideous monster named Grendel and his equally hideous monster mother (named Grendel’s Mother). The monster and his mother are terrorizing the countryside, ruining parties and killing everyone they can get their hands on. It’s a bad scene.

In the story, Beowulf comes to town and immediately starts to kick ass. He rips off Grendel’s arm, beats him with the bloody stump, and kills him. Then he hops down into the monster hole and kicks his mother’s ass. Then he becomes a king and kills a dragon with his bare hands. The end.

Beowulf is a giant “screw you!” to the existential whining of stories supposing the gods hate us, therefore they take away the sun at night. It’s pure Anglo-Saxon jingoism directed at the world at large. “We took over England, bitches,” they’re saying. “You want some of this?” And perhaps that’s why it’s endured for so many centuries. Braggadocio never gets old, especially when there’s a bloody stump involved.

So any time you hear someone use the phrase “beat you with a bloody stump,” know that Beowulf got there first. While everyone from Hemingway to Roddy Piper has now made a story about The Guy Who Comes to Town and Kicks Ass, Beowulf was The Original. He came first, did it best and everyone else is just following in his wake.

So, glee. And then I heard Neil Gaiman, the guy behind the wonderfully moody Sandman comics, and a few dozen other things, was involved and my glee went off the charts. Gaiman has a way with mythological figures. He turns them inside out, plumbs their psychological depths and spits them back out not so much changed as clarified. He’s like reverse osmosis for stories. His take on Sleeping Beauty, for example, is divine.

And then I heard the guy who made Back to the Future, Robert Zemeckis, was directing, and my heart sank a little bit. Sure, Back to the Future was a fun film and all, but it’s about as far away from a bloody-stump declaration of badass as … well, Polar Express, his latest film. And then I noticed a trend: Since his days of making flying cars hit 88 mph, Zemeckis has trended toward stories told with technological means. Polar Express was that film where they made the real life people into cartoons that looked like real life people, otherwise known as Night of the Uncanny Valley. My glee turned to slow, creeping dread.

And then I saw a trailer. Let me say this, there aren’t too many ways you can screw up a story about a dude in a swimming contest near the arctic circle who has to stop, mid-ocean, to cut the head off a giant sea snake. But one of them is making snake and dude look like something out of a badly rendered cut scene in a Final Fantasy game. 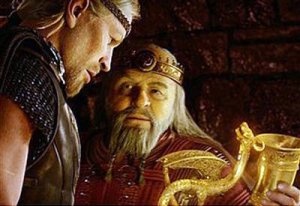 The uncanny valley is that place at the bottom of the chart, where a virtual being’s resemblance to a real person is just close enough to be creepy, but not yet close enough to fool you into thinking it’s actually real. Like looking at a wax model of yourself. Part of you wants to admire it, the other part wants to destroy it. Hard to be entertained by something like that. And such was the case with Beowulf.

After seeing that trailer I pretty much swore not to view the film. And then they sent it to us on DVD, so I watched it anyway. Everyone has a price, they say, and mine is apparently the cost of a movie rental.

I will say this, it wasn’t as bad as I thought it would be. There are parts of the film where you completely forget you’re watching animated characters. The voice acting and overall animation are so good you can almost believe it’s all real. Not quite, but almost. And when it’s all in high gear, you stop worrying about it. But those passages are momentary, like the gentle euphoria that comes from eating a double Moon Pie before bed. It lasts only a moment before you remember that those are bad for you, and will probably keep you up all night in mild gastric agony.

If parts of Beowulf are stunningly beautiful, others are downright horrid. The last act of the movie, for example, is hideous to look at. Which, coincidentally, is the longest stretch of the film “shot” in daylight. This is also the part of the film where Gaiman took the most creative license with his source material, although I won’t spoil it for you. It’s an intriguing twist, and not totally unexpected, knowing Gaiman, but also not entirely convincing. I was equal parts titillated and horrified. The former because, well, it involves sex. The latter because, dammit, it’s not in The Original. But again, you get what you pay for with Gaiman, and we, indeed, expect him to shake things up. It would have been more interesting if I wasn’t stopping every few minutes or so wondering why the graphics weren’t better.

I finished the movie feeling mildy entertained, but nevertheless wishing I’d had a chance to see human actors go at it. Yes, the story was genius, yes I saw a dude reach into a dragon’s throat and tear out his heart and yes, you can never quite get enough of seeing Angelina Jolie naked, even if she has a computer standing in as her body double. But when you think of The Original, you don’t think about the version they dug up and strung up with string to dance for your amusement. When you think of Frank Sinatra, for example, you don’t think of his digitally composited ghost singing on stage at the Grammys, you think of him in a tuxedo on the Las Vegas strip, belting one out with Sammy and Deano by his side. And if you weren’t there to see it firsthand (I wasn’t), you don’t cry about it, you just deal.

Perhaps it would be financially impossible to craft a film version of Beowulf’s exploits. Perhaps the cost of rendering the dragon alone would sink the deal before it left the boardroom. Factor in the budget for hiring actors at their “appearing in person” rates and you can probably forget about it. Which, I’m sorry to say, is what they should have done.

As brilliant as the wizardry was in bringing this all-digital version of Beowulf to life, and as hard as I know the 3-D artists and computer programmers worked to make it all happen, it’s not a great film. I can’t say I enjoyed it on its merits alone. The good parts were good, but most of it was simply mediocre, and as intriguing as the psychological detours were, they were, on the whole, a touch ham-fisted.

Instead, the only real reason to watch this film is to see how far they’ve taken digital artistry, and how real a computer-rendered film can be. And the answer might surprise you. I will spoil this one for you: We’re just not there yet. I look forward to the day when someone can make an all-digital film and my first thought upon watching isn’t about how real or not the all-digital cast looks, but we’re not there yet, and Beowulf is not that film.