I’ll be perfectly honest: I don’t do handheld gaming. The screens are too small, the devices are too large and I remain convinced the experiences to be had on handhelds are – at best – watered-down versions of those to be had on other, TV-based platforms. And playing games on my big screen TV doesn’t remind me of the fact my eyes are more than three decades old and getting older.

Also, I don’t take public transportation, so I don’t have much occasion to play games away from my more comfortable gaming setup. And I don’t believe in playing games on the toilet. I know some of you do; don’t pretend. I’ve heard the clicks and bleeps in the stall next to me. But I don’t do it. The idea of holding the thing in my hands again afterwards … no thank you. So I don’t do handheld gaming.

Except now I apparently do.

The one place I ever seriously considered playing with a handheld device is on the airplane. And I’ve been spending a lot of time on those of late, from family reunions to game conventions. My former SOP was reading a book on the long flights to anywhere from North Carolina, but I’m so particular about what I read I expended my ammunition of interesting reads some time late last year. Plus, sometimes you just don’t want to read a book. Or at least I don’t.

Magazines are great for a while, but even Esquire gets tedious after the initial ascent, and Runner’s World only contains so many insights. I can’t write on planes, so that’s out. Not sure why, but part of the reason is the nearness of so many other people. I get squidgy writing in the office with the occasional passing co-worker peering over my shoulder, so pouring out my deepest thoughts while a total stranger sits a millimeter to my left breathing my air is a bit overwhelming. Anything written in that environment inevitably turns into:

So this winter, with a number of flights still on my schedule and very little entertainment in my carryon bag with which to pass the time, I turned to handheld gaming. Or tried to anyway. Inspired by my successes with Puzzle Quest on the Xbox 360, I figured that would be a perfect point of entry into the DS. Trouble was I couldn’t find a Nintendo DS to save my life. So I borrowed one. This worked perfectly until I had to give it back. Suddenly I was ruing the fact I’d waited until everyone else and their monkey decided to buy a DS to buy one of my own. Thank Vishnu for the internet.

Utilizing a service designed to alert you the exact moment a particular item goes on sale at any of a number of online retailers, my lovely assistant found me exactly what I was looking for just in time to take it on the plane with me to D.I.C.E. last month. To celebrate, I bought Chibi Robo: Park Patrol.

First, a word about Wal-Mart. You may not be aware (I wasn’t), but Chibi Robo: Park Patrol is a Wal-Mart exclusive, meaning you can’t buy it anywhere else. Meaning, if you want to buy it you have to go to Wal-Mart. No, I’m not kidding. I wish I were. Yes, I’ll get to why I wanted that particular game in a minute. For now: Wal-Mart. Focus.

Just like I don’t do handheld gaming, I don’t do Wal-Mart. Yes, I know everything is cheaper there, and yes, I know they have everything. But I don’t shop there. What can I say, I’m a snob. I don’t mind paying a few extra dollars to not feel like I’m buying house wares in a third-world country. And don’t even get me started on the food. If you’re buying food at Wal-Mart, it’s time to seriously reevaluate your priorities.. Nevertheless, I wanted Chibi Robo: Park Patrol, and I didn’t want to wait for delivery from the online store. So I had to go. I won’t lie, I carried a knife. 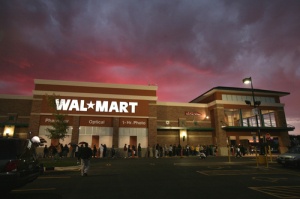 The very last time I’d intentionally gone to Wal-Mart was over a decade ago, when, at 3 a.m., I decided I needed to buy a pack of white T-shirts. I’m certain there was alcohol involved. Oddly, the store was almost tolerable at that time of day/night, but even at 3 a.m. there were still at least three angry mothers wheeling around screaming babies in their squeaky-wheeled strollers. I bought my shirts and …. I forget exactly what I did after that. But the shirts were important, I know that much.

In the ten or more years since, the experience has not mellowed. On the Sunday I ventured into my local Wal-Mart I felt certain I was one of a small minority who actually spoke English. This includes the people working there. Angry mothers were legion, and the din of their screaming children ruined what little of my hearing I hadn’t yet blasted away with heavy metal and videogames. The aisles were literally jammed with people loading all manner of things into overflowing carts. It was like a scene out of a disaster movie, except the disaster these people were fleeing was the crash of the American economy, and instead of rice and bottled water, they were stocking up on Chinese goods.

I took five steps inside and instantly regretted my decision to return. It was a wall of sound and horror. Like Phil Spector meets Tobe Hooper. I waded through the mass of humanity to the back of the store, feeling like Agent Smith in the Matrix, afraid of being infected. I found the game I wanted (which, for a Wal-Mart exclusive, was surprisingly well hidden), paid for it, grabbed a piece of hardware I needed to hang a painting on my wall in passing, queued up at the self-service checkout stand and waited for the torment to be over.

Advice: Don’t use the self-service kiosk at Wal-Mart. For every time you run into a store to grab a jug of milk or a battery, breeze through the self-checkout and are back in your car five minutes later, there will be one time when you find yourself in line behind someone who shouldn’t be trusted to go shopping by themselves at all, much less using the self-service kiosk. Inevitably, that one time will be at Wal-Mart. And they will have children who will try to help them and end up making things worse. And they will then start beating those children right there in front of you. And you will suddenly wonder why you even got out of bed that morning. So don’t do it. Trust me.

And now for why I wanted to buy a silly game like Chibi Robo: Park Patrol: It makes the pain go away. After a long day of swimming below the poverty line at Wal-Mart, very few things will take my mind off the fact that this is the world I live in and these are the hands I’ve been given. One of them is scotch, but I’ve been a good boy lately and so that’s out of the question. Which leaves Chibi Robo. 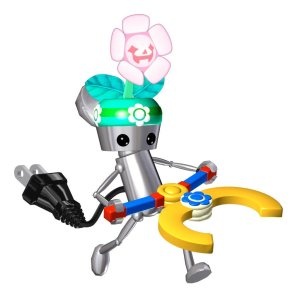 The original Chibi Robo on the Gamecube was a game I tried at the recommendation of a number of people and against my better judgment. And I loved it. The gameplay was excellent, the story was fun and the damn, little robot was so achingly cute I couldn’t stand it. You starred as a tiny robot enlisted by a dysfunctional family to help clean up their house and make their lives better. The more things you did for them, the more “happy points” you earned, and the happier they became. And that’s pretty much all there is to it, which, ironically, makes it wonderful.

But the best part of the game was the sound. Every movement the robot made, from walking to scrubbing floors with a toothbrush to using his helicopter propeller to sail safely to the ground from great heights, made music. Playing the game, you were assembling those musical notes into a symphony of sound, while exerting order in a chaotic world and setting things right. Basically, for a neurotic control freak like me, it was better than Xanax.

Park Patrol is more of the same, except you’ve taken your show to the public garden and are helping flowers grow and banishing the evil smog monsters. It’s a hackneyed statement on the condition of our planet and how we, as little robots, can exert meaningful, positive change, but in spite of that pathetically trite premise, it’s a lot of fun.

Coming home from Wal-Mart, I’d barely set foot into the house before I was on the spare couch, DS in hand, firing up Chibi Robo: Park Patrol. Ten minutes later, I’d rediscovered my Zen. “If the little robot with his musical feet can wash away the trauma of a trip to Wal-Mart on a Sunday,” I said to myself “imagine the wonders he will do for airline travel.”

A month later, I can call the experiment a success. Thanks to Chibi and my sleek, sexy black DS Lite, I’m now not only a handheld gamer, but a relatively relaxed airplane traveler to boot. I’ve joined the touch generation, and now I wonder how I ever managed to get by with just a book and a double shot of scotch. The screen is still too small, and the device is just on the wrong side of fitting comfortably in a pocket, but Vishnu help me, I’m discovering the play experiences are just as engaging as those to be found on other platforms, and more so when tailored to the touch screen on the DS. My misconceptions sloughing way, horizons broadening, world view expanding … I’m not sure what will come of all of this. But flying is more fun now. Perhaps that’s enough.

Russ Pitts is the Acquisitions and Production manager for The Escapist. His column, Smile and Nod, appears every Monday. His blog can be found at www.falsegravity.com.