Sometimes you get a second chance at happiness. Not often, and I wouldn’t suggest you go around expecting it unless you’re prepared for the laborious process of rebuilding your ego with careful applications of alcohol and one-night stands, like re-inflating a used car dealership’s giant gorilla with a bicycle pump. But if you stay on target – for just a few more seconds – every once in a while, what was once wrong will become right. And that will be a joyous day.

This weekend I was given the gift of a second chance with one of the best games I’ve ever played. To get that chance, all I had to do was fire up one of the most frustrating games I’ve ever played and hope against all hope it had turned things around, cleaned itself up and turned over a new leaf; that the problems it and I had were things of the past and that I’d discover a whole new game underneath the old, a game that’d been waiting there all along, but had gotten lost somewhere along the way.

I didn’t think it likely. After all, when you go back to the one you’ve left, even if it’s put on a new suit, it’s still the one you left. It’s hard to forget the sleepless nights, the betrayals and the heartache. Turning over a new leaf, in other words, is hard when that little leaf is buried under a mountain of emotional baggage. But I gave it a shot this weekend and fired up Oblivion. My brother told me to, and while I don’t always do what he tells me, I never pass up a chance to blame him for my misery. Best case: I’d actually enjoy myself. But if all else failed, I thought, I’d have a miserable time with the game and get to berate him for it later. This is called a win-win.

My problems with Oblivion stared a few weeks after it came out, when I’d gotten an Xbox 360 as a gift and picked up that game to revel in its next-gen awesomeness. Since my 360 was a gift, however, I was subject to the whims of the gift-giver and the availability of new hardware, which, in this particular case, meant receiving a hard-drive-less version of the console and the promise of an add-on hard drive at some later date. So my first few weeks with the machine were spent without the hard drive. Which meant my first experience playing Oblivion, arguably the most sought-after Xbox 360 release title, was of playing it without the benefit of hard drive caching. In other words: it sucked.

For those with no idea what that means, a quote from the makers of the game:

Oblivion uses the Xbox 360 hard drive extensively to cache (copy and reuse) game data. This is done to optimize all loading the game does.
[/blockuote]

By “optimize all the loading the game does” they mean “make the game playable.” Trust em, without this handy feature, it’s not. I know. I tried.

Imagine playing the best game you’ve ever experienced and having to pause for 2-20 seconds every half minute or so while the game loads something from disc. I wish I were exaggerating. It’s like trying to watch a movie in a theater in Ohio while the film’s individual reels are delivered by courier, one at a time, from Los Angeles. On my evenings with Oblivion, I spent more time reading, playing crossword puzzles and doing my taxes than I spent playing the game. I created a sort of ad-hoc drinking game; every time a load screen came up, I’d take a drink. I remember little of these sessions. 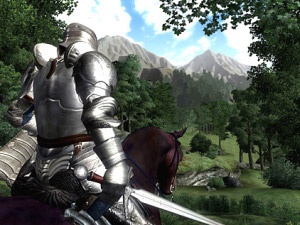 When my add-on hard drive finally showed up, I was ecstatic. Oblivion really was a great game, with tons of cool content and fun adventures, I just wasn’t able to enjoy any of them. I found myself avoiding certain areas of the game or certain quests (opening doors, for example) because there would be too many loading screen between me and where I needed to be. It was like being back in high school and avoiding the West side of campus to keep from getting kicked in the gonads by the miscreants hanging out in the smoking area.

Unfortunately the hard drive didn’t work. I mean, it did work, it just didn’t work with Oblivion. I’ve since learned that this was a “known problem,” in that, if you started playing the game without a hard drive, then added a hard drive later, the game would still think you didn’t have a hard drive and refuse to cache, and therefore still not be any fun. I understand how this can happen. I understand a game like Oblivion is incredibly complex and they can’t get everything right the first time. I know nobody is perfect. I just don’t care. I paid for the game; I expected it to work as advertised. It did not, so I quit playing. Ipso facto, moving on.

Enter: my brother. He just got his Xbox this holiday. So when he turned on his Xbox 360 and fired up Oblivion, he reaped the rewards of waiting two years for the bugs to get worked out. Not only was his Xbox more than likely not going to fry itself due to shoddy manufacturing, but he also paid less than I (read: the person who bought my Xbox) paid, and as soon as he started Oblivion, the game downloaded the latest patches, which included a few performance tweaks and the fix for that stupid, unforeseeable issue I’d been having. He was having the time of his life, playing the game rather than twiddling his thumbs and waiting for something to happen. And he didn’t hesitate to tell me so.

Naturally, this annoyed me. We are brothers, after all. Sibling rivalry is not a myth. So this weekend, after a long drought of being too busy to play games, I set aside a few hours to fire up Oblivion and see if a. my save files still exited, b. I remembered how to play the game and c. if it was any fun two years later. The answer to all three questions is a resounding “yes.”

My “few hours” turned into four, which turned into six. On Saturday night, after having played for about four hours, I looked at the clock and decided to get in an hour or two more before bed. When I looked again, it was two hours later, almost 1 a.m., and I resolved to wrap up what I was doing. When next I looked, it was after 3 a.m. and I still wasn’t ready to quit. I didn’t get to bed until after 4 a.m.. This hasn’t happened in a very long time. 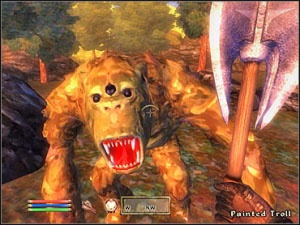 If there’s a downside to working in the game industry, at least as a writer, it’s being at the mercy of the release schedule. To know the industry, you have to know the games, and to know the games, you have to play them. Nobody cares about your impressions of a two year old game, at least not anyone with money to spend. So we play them when they come out and move on. It’s a hard-knock life, I know, but sometimes I long for the good old days when I played what I wanted to play when I wanted to play it, and didn’t have to justify spending my play time on an older title by telling myself I’d write a column about it on Monday. But this is self-indulgent whining, so I’ll move on.

The good news is a dedicated developer, a downturn in the game release cycle and a thoughtful sibling all conspired to get me back into a game I didn’t have a fair chance at enjoying the first time around, and what I found in Oblivion is truly remarkable.

Take, for example, the quest that takes place inside one of the ubiquitous hotel room art paintings littering the game’s architecture. As if the game wasn’t beautiful in its own right, this mission replaces all of the normal game textures with brush-stroke imbued versions, painted in vibrant colors, the sky a mottled blue on white like the top half of a Van Gogh. Or the case of a missing woman, which takes you to an inbred, post-disaster village where nothing is as it seems, and the inhabitants look more likely to kill you than help you. Or the fabulous cities, where, behind every door I wouldn’t have dared try to open before, waits someone new, perhaps with a quest for you.

I can’t help but be a bit alarmed at the sequence of events that conspired to cheat my of this experience the first time around. Hardware incompatibilities and post-release patches were supposed to be the sole province of PC gamers, who, as far as I’m concerned, are more than welcome to those idiosyncrasies and seem genuinely offended at the prospect we console gamers may now be encroaching on their territory in that regard.

Granted, as one of the best-selling games of its release year, Oblivion can’t rightly be considered a forgotten gem, rescued from obscurity by a well-timed patch, but it certainly can’t be considered an example of a perfect launch either. Nor can its initial host platform, the 360. What does this say about our industry in particular that we take it for granted games and consoles aren’t going to be perfect right out of the gate? Imagine what would happen if your restaurant tried to pull that one over one you, serving you a raw steak and then offering to cook it at your table. Or if Ford sold a car with innumerable defects then ordered a recall – OK, bad example. But you see where I’m going with this.

As consumers, we should have a little more respect for ourselves than to settle for second-rate products and hope for a patch to arrive. And as an industry, developers should be ashamed this happens even once.

But again, I’m bitching when I should be gushing. This weekend, in a rare twist of fate, I got a second chance at happiness, and I intend to make the most of it. I predict I’ll again be losing sleep, but this time for all the right reasons.

Russ Pitts never buys anything that hasn’t been tested by a million or so early adopters first. His blog can be found at www.falsegravity.com.