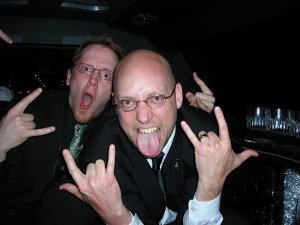 I’ve got a big bowl of jelly beans on my desk.

“What are you now, Ronald Reagan?” Was the first question, posed by my boss.

Yes. I’m Ronald Reagan. Eat one for the Gipper and tear down this wall!

Actually I just like jelly beans. But only the good ones. Only the super tasty ones that taste just like one thing, but in sweet jelly bean form. Also, they have to fit inside my Polar Bear jelly bean dispenser. Push on his tush and the beans come out of his hiney. It’s disgusting and cute and fun. Like life.

Also disgusting and cute and fun: Bean Boozled Beans. Basically, you get a box with various colors of beans, but for each color there are two flavors; one sweet, one foul. The yellow beans with brown splotches are either flavored like banana or pencil shavings. The Blue ones are berry or toothpaste. Orange is either peach or vomit. And the black ones: licorice or skunk spray.

A lot of folks consider the black ones a losing proposition either way, and I’m one of them, but I had to try one. I had to try all of them. Julianne and I took turns. I popped an orange, she popped a yellow (buttered popcorn or rotten egg). It was like a scene from The Deer Hunter. Our co-workers were surrounding us waving money in their fists and shouting Mao! Mao! This is how we’re weathering the summer game drought at The Escapist.

I got peach and breathed a sigh of relief. Julianne got rotten egg and is still tasting it. We went back and forth for a while, I got mostly sweet, she got mostly foul. Then we each had one left: black. We shot them at the same time and almost immediately started retching in the trash cans. In case you’re wondering: skunk spray tastes like death. I recommend avoiding it.

I’m not sure there was any clear winner in our little contest of wills (we were pretty clearly all losers), unless it was the folks at Jelly Belly who concocted this foul experiment. We all wondered aloud what life must be like for the poor dolt who has to flavor test those things.

Speaking of perfect flavors, the hotel bar at the Soho Grand makes the best mojito I’ve ever tasted. Perhaps the best anywhere. If you’re in town, I recommend giving it a try.

Mojitos are one of those tricky drinks that sound simple but can be horribly mucked up if prepared carelessly. Rum, sugar, lime, soda, mint. Simple, but not. Too much lime, or too little rum and you’ve ruined it. It’s a testament to the subtle power of the human tongue that so few ingredients can be aligned in so many ways that aren’t right, but only a few that are. And when they are … it’s as good as it gets.

The mojito at the Soho Grand is layered. That’s the key. If you start at the top, you get a mouthful of lime juice; start at the bottom and you’ll be drinking straight rum. But if you wait, let it settle, or – heaven forfend – stir it a little, you’ll find perfection. Sip it through the straw. The mint leaves have been muddled, but not crushed. They remain whole. You won’t be picking bits of green out of your teeth the rest of the day, but you can taste them. The sugar is caked onto the bottom of the glass. You’ll get a few grains in every strawful. They’ll crunch between your teeth. This drink has texture. It’s basically heaven in a glass. But I digress.

(Pictured: Jon Hayter and Russ Pitts pause to reflect on the significance of The Escapist’s twin Webbys.) 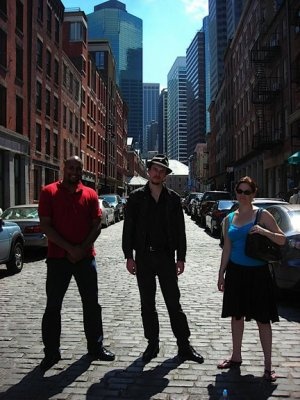 We were in New York City to accept our twin Webby Awards for Best Game Related Website. Ordinarily when I travel for work I’m strictly business. Up early, down late, skipping the parties to get a little more work done and hating life until the day I go home. This one was different. For this one we decided to enjoy it a little.

Tuesday afternoon we were sipping drinks and eating in a little joint called Felix’s, described by our guide, the inimitable Chairman Kurz, as French Morrocan Cuisine. I had the trout. It was divine.

Better than the fish, though, was the ambiance. Felix’s is an open air joint, and that day in Manhattan it was easily above 90 degrees Fahrenheit. Sitting there, watching the traffic pass by, smelling the patina of the restaurant’s antique wooden furniture roasting in the heat, wondering how quickly it would take to get used to not having HVAC again, I realized how infrequently I actually stop to smell the rosewood and smiled.

Later that night we caught up with Yahtzee and headed for the festivities. The first stop of the evening was the Museum of American Finance, where they were serving drinks and snacks. I don’t get to Manhattan very often. The idea of holding a cocktail party in a neo-classical museum space is new to me, but I rolled. My first scotch and soda came to me as Macallan 12 year with a little soda on top and I knew it was going to be a good evening.

Across the street at Cipriani’s, another gigantic marble structure that surely wasn’t intended for food service, we were seated in the middle of the room, a shoulder jab away from Lou Reed, David Byrne and the man of the evening, Stephen Colbert. Ours was arguably the second best table in the place. There, too, the scotch (and champagne, and wine and whatever the hell you could imagine) was flowing and that almost took the edge off waiting to see if somebody would finally have something witty and fun to say with five words.

It became a sort of game unto itself. You knew the marketing folks were going to try to slip in a slogan or two. The smart web guys were almost universally trying their hand at snappy humor and failing, and occasionally someone would try something so completely complex it made one wonder how you could hear the rule “one person and five words only” and think that meant it was OK to bring three guys on stage, each holding part of a five-piece sign that spelled out something barely legible. And then there was the guy who just said “thanks” and got grilled by emcee, Seth Myers for being “The Iceman.”

In all it was a fun event. The steak was perfectly cooked, and the seemingly endless parade of five-word speeches served as a reminder that there was a world of creativity in that room. I was thrilled to be in their company.

Russ Pitts does not ever want to taste sweet candy vomit ever again, thank you. His blog can be found at www.falsegravity.com