Rushing to put on jogging pants and get outside to do a few miles before the sun went down, I realized I’m not really a fan of “real-time” strategy. Turn-based is way more my speed.

If I could have paused the sun, located my jogging pants, stopped a second to thoroughly tie my shoes, found my iPod without tearing apart the whole house and tripping over the dog and gotten out the door without knocking over old paperwork snowdrifts I’d been neglecting for months, I’d have been a lot happier. But life is not turn-based. In life, the other guy is moving during your turn, too. You can define “other guy” however you wish (time, weather, bill collectors), but the result is the same; rarely do you feel as if you’re thoroughly prepared for the next assault, or through with one obstacle before the next is upon you. Sometimes you just gotta close your eyes and power through.

As I mentioned last week, I’ve got a boner for process, and keeping minutia from overpowering the big stuff is a minor obsession. Which means you have to actually tackle the minutia as it comes up, and some days, that’s just too much to ask. Some days the minutia is so minute it’s a struggle to even notice it, much less deal with it. This past fall, I had about 100 or so days like that. The result: a minutia avalanche I’m only just now able to claw out from under.

I spent the weekend filing backlogged paperwork, cleaning and organizing various closest and storage spaces, planting peppers, making lists and generally catching up. Taking advantage of the lengthening days to renew my lease on life. Spending time productively until I can buy a boat. Taking, in other words, my turn to plan for the next. I didn’t realize what I was doing until I took a break.

If you haven’t discovered Boxhead yet, go now and play it. I’ll wait.

The series is designed by Sean Cooper, previously of Bullfrog/EA, and it’s the most brilliant bit of capsule gaming I’ve seen in years. Entire 60+ hour adventures don’t pack the excitement of one 10-minute session with Boxhead, and every new installment (there are five so far) ups the ante in new and unsurprisingly unpredictable ways.

Take for example the original Boxhead: Halloween. While shepherding survivors from a ruined suburban paradise to relative safety was entertaining, the best part of the game, by far, was killing zombies and watching the ground beneath them turn bright popsicle-red. “More of that,” I said, “and this game will be irresistible.” Enter Boxhead The Rooms and More Rooms, in which the premise of escorting survivors (or any premise at all) has been removed in favor if killing zombies, period. Lots of zombies. As in they never stop coming and you probably won’t survive. As in the ground will be pure red after two or three levels because slaughtering them is so much insanity-laden fun that stopping to do anything else (breathe, eat, lie down) just doesn’t come up.

“Damn, it’d be nice if I could play this co-op,” I said to myself. Boom! “2 Play Rooms” introduced co-op. Yet, as entertaining as the core Rooms game can be, there’s real fun to be had in exploiting the scenario just a little bit to make it even more fun. I like to select a long horizontal room, create a barrier of exploding barrels at one end of the map (the end the zombies pour out of), then take my time setting claymore and exploding barrel traps the length of the room and picking off survivors as they funnel through my death maze.

“More of that,” I said, “and this game will be unstoppable. “Enter: Boxhead: The Zombie Wars. In TZW you star again as Jon Bambo, lone human survivor of The Zombiepocalypse, pitted against wave upon wave of the undead, with only a few basic weapons with which to fend them off. You can build barricades, plant turret guns and lay down barriers of exploding barrels. It’s like Starcraft meets Tower Defense, which is exactly what I imagined I’d always wanted. 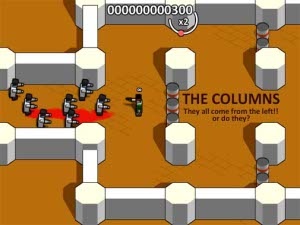 Now here’s the part where we remember wishing upon a star can be bad for you. As awesome as the realization of any dream may be, once you have it in your hands, once you can actually turn it over and look at it’s unfinished underbelly, you realize you don’t dream in enough colors to ensure you’ll always get exactly what you want. Or, rather, that your dream engine often skips a few steps, and what comes out is just as likely to annoy as entertain.

The problem with TZW is the Boxhead mechanic isn’t a perfect fit with a strategy-type game. It’s like using an SAE wrench to work on a Japanese car. Standard-to-metric conversion work great on paper, but as the crash of the Mars Orbiter proved, they can be fatal in the real world.

In TZW, the zombies pour on in waves as deep (or deeper) as in any Boxhead game, and you mow them down by applying an excessive amount of firepower, each boxy-looking zombie falling away like old bills yet to be filed, each turning the ground that familiar shade of red. You still acquire more weapon upgrades by killing lots and lots of zombies, and you still progress through the levels by clearing them of every single zombie, mummy or what have you. It is, after all, a Boxhead game. But marrying this mechanic with the fortress building aspect of a strategy game makes is difficult to enjoy either one.

You can create a base as elaborate as you like, but you’ll still have to go outside to collect the loot, and slaughtering zombies willy-nilly to acquire bigger and better weapons means you’re often stumbling over and around your battlements, which then become an impediment to you, rather than the swarming undead. More often than not, you have to pick one strategy or the other, close your eyes and power through.

The problem is the game seems bound and determined to ruin your strategy, whichever you choose. Either you run out of weaponry to lob at the undead just as they’re tearing your barricade apart at the seams, or you find yourself needing the support of a heavily fortified position and scramble back to where you thought you’d left one. In the first case, you discover rather quickly that a fortified position doesn’t stand a chance of surviving unless, for some reason, you’re running around outside providing an assist. In the second, you discover that unattended fortifications tend to be destroyed. In both cases, victory is elusive.

In a simple, one-screen, one-strategy, kill-them-until-you-can’t game like The Rooms, the no-win scenario is easier to swallow, but in a game as potentially nuanced as The Zombie Wars, the conceit feels out of place. With all that potential depth, the fact winning isn’t even a possibility is hard to swallow. Worse still, it’s not fun. Like life. Like sorting through a box of old letters a week after filing your taxes and finding proof you received money you didn’t claim.

Also like life, this game is hard. Not hard like I may master it some day with a little effort, but “there’s no way I’ll ever get good at this” hard. Even on easy. Which is not only not fun, but kind of retarded. As Katie Stone Perez, executive producer for Xbox Live, said at her GDC panel, if you’re going to have an “easy” mode, make it easy, FFS. OK, I added the FFS, but the rest was Katie.

Playing TZW, I was reminded of all the obstacles in my way in real life, how the turns between beat downs were never quite long enough, the rewards never quite good enough, and the challenges just a little harder than I would like. In short, looking over my shoulder at the work needing to be done, and in front of me at the game on the screen, I was never quite sure which I was avoiding for the other.

Russ Pitts is realizing he takes some things way too seriously. His blog can be found at www.falsegravity.com.