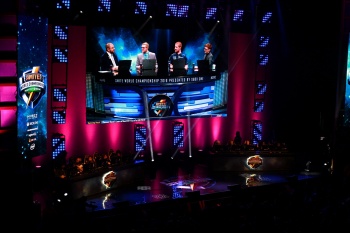 In addition to wrapping the first day of the tournament, Hi-Rez Studios had a number of announcements for SMITE and their other properties.

Well day one of play is in the bag with eight of the ten teams battling it out in double elimination best of one matches – two teams were already seated into the quarterfinals based on previous results. The purpose of today was to eliminate two teams along with filling out the bracket for subsequent days.

If you’ve never watched an e-sports event, these placement games can sometimes be a mixed bag. There’s often a lot of one-sided matches playing out as the dominate teams that otherwise missed byes stomp there way to the winners bracket, but the best of one means that upsets are not uncommon. Even the best teams and players can slip up.

Day one of the SMITE World Championship went mostly as expected. The first match of the day was a cringe-worthy stomping where one team didn’t even get a single kill. Later in the day the matches started to get a lot more interesting and evenly matched as winners played winner and vice versa. Perhaps the best match of the day was a psuedo-upset of the 2nd seed NA team, Enemy, over the wildcard team, Fnatic, who most saw as the better of the two. Enemy managed to show a strong performance and grind out a win despite being a good deal behind at one point in the game.

With all the spotlights around, it’s unsurprising that Hi-Rez Studios took the opportunity to make an number of announcements about both SMITE and their other games. As previously reported earlier, the big reveal was of the new god and the inclusion of the Japanese pantheon to SMITE. Changes were announced to how the game rewards and encourages player engagement. Currently SMITE uses a system that offers reward for logging in subsequent days in a row, but the game will be moving to a daily quest system instead. Each day you’ll get a quest to complete a certain task, like win a certain number of games with a specific type of character. Let’s face it, it’s working pretty well for Blizzard in so that’s not a bad model to emulate. The devs were also showing off their new Joust 3v3 map, which takes inspiration from the Sun Wukong stories. I actually learned that Joust is the most popular mode on the Xbox One port, and with the game officially releasing in China soon, it’s probably a smart move to cater a little.

It wasn’t just all SMITE, though it certainly had the main stage both literally and figuratively. Hi-Rez Studios just today released their first mobile game, Jetpack Fighter. I’m typically pretty skeptical about most mobile games, but Jetpack Fighter has a nice Mega-Man vibe going for it and the swipe-based movement lends itself well to the platform. The studios last two properties, Tribes: Ascend and Paladins weren’t left out either.

Technically it’s not a new announcement, but Hi-Rez Studios finally put some developers back on Tribes: Ascend with the aptly named ‘Out of the Blue’ patch releasing last month. ‘Out of the Blue’ made some major changes to Tribes: Ascend angled at making the game more like its predecessors in the Tribes series. Hi-Rez Studios had previously stepped away from Tribes: Ascend to go all-in on SMITE a while back, and I got the chance to talk to them about coming back to the franchise – stick around to more in-depth content on that.

And finally, Paladins, a character-based multiplayer shooter incorporating collectible card game elements, is still plugging away in closed beta currently. The game is on-hand at the event for fans to checkout, and the team was revealing a new character, which crossed over from SMITE, along with announcing a tournament. When talking to the developers, they actually found that running a tournament is sometimes a better way to spend the same resources on QA by throwing a large number of players with varying mindsets at it. This really brings up unseen issues and provides valuable feedback.

With day one wrapped, the stage is set for tomorrow and we’ll get our first look at the NA and EU champions in action and whatever surprises Hi-Rez Studios still has in store.

Day two was finished surprisingly quickly with a clean sweep of 2-0 matches. You gotta feel for the teams advancing out of the loser’s brackets sometimes. It’s great to not get eliminated from the tournament on day one, but it means getting paired against the champion teams that were already placed into the quarterfinals. While there were no complete shutouts, it wasn’t uncommon for the losing team to not have dealt any damage to the enemy structures.

The field has been whittled down to four teams, who will play best of five matches in the semi-finals tomorrow. Will either of the teams advancing out of the placement round upset or will the finals be a face-off between the NA and EU champions? We’ll find out tomorrow.

The big story of day three was that neither of the bye teams, Cloud 9 and Paradigm, are advancing to the finals. Both Enemy and Epsilon Esports battled out from the placements rounds.

Congratulations to the champions, Epsilon Esports. A few of the games looked like they could go either way, but they were able to close the gap every game and win a dominating 3-0 over Enemy.

Saddle Up, C*cks*ckers!: A Deadwood Movie Is Coming Our Way