Here’s the skinny on every series in the Law & Order franchise.

The online release of a teaser for an upcoming episode of Law & Order: Special Victims Unit is normally the last thing The Internet gets itself worked up about – which is incredible in and of itself, considering that “gigs of chatter about meaningless trivium hardly anyone actually cares about” is pretty-much The Internet’s reason for existing. Still, that’s exactly what happened last week, because this week’s new episode is covering certain recent unpleasantries in the online and gaming communities.

The reaction to the episode will likely be as predictable as… well, an episode of Special Victims Unit itself, one imagines. But as someone who’s probably watched more Law & Order over the years than is humanly healthy (I work mostly overnight and cable networks like to run them in blocks) it was amusing to me to see the perplexed reaction from some “geek” circles unfamiliar the franchise’s… “unique” sense of tone and rhythm, which I can only accurately summarize as “2015’s crimes solved by 1994’s TV cops.” It’s easy to forget, in this supposed “Golden Age” of cutting-edge cable dramas, classy limited-series and built-for-bingers streaming heavyweights, that decidedly middlebrow programmers like this still reign supreme across a lot of network TV – many of them running long enough to have accrued fan-followings that would be the envy of more prestigious critical-darlings.

Suffice it to say, it seems like more than a few people (not all of them “gamers,” but many of them) will be dipping into this franchise for the first time; which, I imagine most have probably already guessed, is more than enough of a fig-leaf to justify finally taking this breakdown of the franchise’s myriad incarnations out of my “to do” pile. Enjoy!

Sometimes clarified as L&O “Classic” or “Prime” by fans, this was the original series and the original fire for an entire epoch of broadcast television. Interesting, then, that in the 90s it was viewed as a revival of the mostly-dead “procedural” genre; i.e. shows where the story and tension were derived not (primarily) from the characters but from the step-by-step details of their work. This format had ruled the cop and lawyer genres in the 50s and 60s, beginning with Jack Webb’s immortal Dragnet, but had fallen out of favor in the 70s and 80s as legal dramas became more consumed with the psyches and personal-lives of its profession and cop shows came to favor action and/or witty banter.

Law & Order revived both forms of the genre by mashing them together: The series is rigidly – almost dogmatically – committed to a formula. Each episode is an hour long. In the opening moments, a crime is either committed or discovered. Over the course of roughly half an hour, the regular police characters investigate the crime and (for the most part) make an arrest by the half hour mark. At that point, the focus shifts to the regular lawyer characters, who prosecute the case. It’s also common for both halves to feature a plot twist: The “inciting” crime will often appear ordinary, only to lead to a more complicated crime typically derived from a newsworthy “ripped from the headlines” real-life case; and it’s pretty standard for the first person arrested to not be the “real” or “boss” criminal.

At the time, the fact that the series focused on procedure was revelatory. Even fans would grow attached to certain regular characters more than others (Sam Watterson’s D.A. Jack McCoy and Jerry Orbach’s Detective Lenny Brisco are generally considered to be the “mascots” of the series), and the series remained fairly consistent throughout its impressive 20 season run. There was some evolution over time; the earlier 90s seasons being “grittier” in the cop sections (good “average” New Yorkers under assault by psychos, gangsters and “ghetto” thugs) and preoccupied with villainous defense attorneys and the O.J./Menendez-era boogeymen like “race card” and “psychobabble” defenses. Later seasons would gradually change course, leading to more socially/politically nuanced stories which often found Watterson’s McCoy – a onetime leftist-radical turned fight-for-the-little-guy legal legend – using legalistic-loopholes of his own to bring the hammer of law down on neo-nazis, homophobes and other 21st Century villains.

Fans were shocked when the series was cancelled one season shy of tying the record (for number of seasons) held by Gunsmoke, but lately there’s been talk of reviving the series with an “all-star lineup” of earlier characters has begun to gain traction. 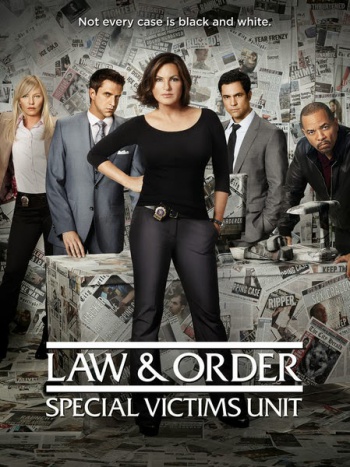 What is the (for now) sole surviving L&O was initially pitched as a “soapier” cousin to the original: Greater focus on the characters and built around a special police unit (operating under the supervision of a single prosecutor) dedicated exclusively to sex crimes. In the first season, there’s a pretense toward using that particular specialization as a venue for advocating on behalf of victims and the basic idea of treating rape, harassment and abuse allegations as serious crimes; but inevitably that gave way to being an excuse for lurid, sleazy or even darkly-titilating storylines that had always proved to be the original series’ most reliable eyeball-catchers (“High School Prostitution Ring! Killer Dominatrix!! Lesbian Stalkers!!!”)

The show got perpetually more ridiculous as it went on, but that proved to be a strength buoyed by a reliably excellent ensemble cast. Mariska Hargitay and Christopher Meloni were the main detectives, Olivia Benson and Elliot Stabler, effectively Dirty Harry split into partners differentiated mainly by gender and the rationales by which they justified pounding perverts and sleazebags into hamburger: him the generically-conservative, guilt-powered Catholic family-man with a military background and a black-and-white moral code, her the patriarchy-punching Amazon gunslinger culling vengeance for raped women and abused children across the city. Onhand for gallows humor was Richard Belzer as John Munch (a character migrated to the series from both Homocide: Life on The Streets and The Wire) and, eventually, Ice T as streetwise Tutuola.

SVU deliberately avoided the rigid formula of the original series, tipping focus to the cops (especially as Benson and Stabler became audience favorites) and letting cases play out accordingly. Eventually, even the sex-crimes focus became malleable: It’s pretty standard now for an episode to open with a sex crime only to make it the “gateway” to the “real” story; like in “Wildlife,” where the discovery of a dead woman who looks like she might have been sexually-assaulted is an excuse for SVU to clash with Russian exotic-animal poachers who are trying to smuggle a rare endangered monkey into the country (it’s in a basketball – really) for wealthy Chinese gangsters who want to turn its bones into expensive chopsticks.

By now, a lot of the “prime years” cast has departed, leaving Hargitay’s Benson as the centerpiece of the series and indeed the “face” of the franchise at this point. 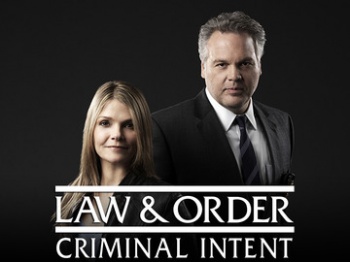 This series took the franchise as far from its roots as possible while still being recognizable as a Law & Order show. The original “tweak” this time? Getting to see the criminals do their thing in tandem with the cops trying to find them. Pretty quickly, though, it became a star-vehicle for the crime-solving chemistry between Vincent D’Onofrio’s Detective Goren (a brooding teddy-bear of a man, possibly suffering mild autism but gifted with a socially-crippling genius for getting into the heads of criminal masterminds) and Katherine Erbe’s Eames, his more traditionally-focused partner.

Instead, shared-focus with criminals became a mandate to hand Goren a succession of supervillains to match wits with master-criminals with elaborate plans and grandiose justifications, most notably Olivia D’Abo as brilliant, sexy serial-killer Nicole Wallace, who ultimately became Goren’s arch-nemesis for much of the series. For awhile (to accommodate health and personal issues of D’Onofrio’s) half the episodes got handed to Chris Noth as Det. Mike Logan, a fan-favorite returning character from the original Law & Order’s golden years; followed by a season-length digression with a new Goren-esque character played by (of all people) Jeff Goldblum.

Whereas the previous two spin-offs had kicked the lawyer side of the original series’ double-act to the sidelines, TBJ goes all-law, all the time, with each episode covering a court case starting with both side’s pre-trial preparations. Interesting premise, but “straight” lawyer shows (as opposed to ensemble dramadies whose characters were lawyers) haven’t been able to gain traction in years. The series lasted only 13 episodes.

A novel premise – porting the L&O tone and trappings to the legal system of another country – yielded this respectably popular eight series (53 episodes total) ITV series, which follows the original series model of splitting storylines between detectives and Crown Prosecutors. Went on official hiatus last year, but has been tipped for a potential comeback since.

This sounded like a can’t-miss idea: End the original Law & Order, by this point eclipsed in popularity by the CSI/NCIS era of procedurals and by the megapopularity of it’s own SVU sibling, and revive the concept in Los Angeles. It had a good cast, too, including Skeet Ulrich, Alfred Molina and Terence Howard. But it just couldn’t stick the landing (even with Ulrich’s character getting a crossover-cameo with SVU in which Det. Benson practically knights him as the new coolest-cop-on-Earth for the audience) and vanished after only a season.