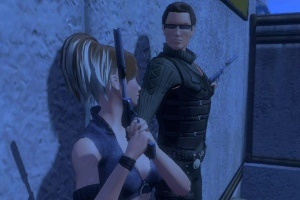 Growing up as a boy in America, my childhood thoughts were, as you’d expect, generally focused on three things – guns, secret agents, and video games. Many years later, I’ll be the first to admit that not much has changed (other than girls no longer being gross). So when at some point that now seems like a lifetime ago SOE announced that they were working on a new spy-based MMOFPS that would allow us to “live the life of an elite agent”, my ears perked up and I was filled with a warm buzz of delight. Not even the fact that I’m generally terrible at FPSs could deter my piqued interest.

Imagine my delight, then, that I was able to get a hands-on experience of the upcoming game at this year’s SOE Fan Faire in Las Vegas.

This playable version was a team-based multiplayer involving multiple floors, tons of cover, and three capture points that increase the time available to your team. As I said above, I’m awful at FPSs (and my score demonstrated that fact), but that has never detracted from my attempt to play them (much to the chagrin of my teammates). The gameplay is as fast, furious, and twitchy as you’d expect from any shooter, with a class/role-based character system that has drawn heavy inspiration from other modern shooters, with Valve’s Team Fortress 2 admittedly at the top of the list.

“We felt that in order to make a successful MMOFPS, first we needed to make a core FPS, and then fundamentally change it,” said Lead Designer Rory McGuire. “We wanted to bring in constant game-changers, obvious upgrades, and let the player decide how to [progress with their character].”

You’ve got five roles available to you, each unlocked for your character via leveling up and performing missions for one of two factions (though regardless of where you start, both are eventually available to you). Each role is designed from a recognizable class-shooter staple, such as the sniper-type Recon or the gadget-laden Technician, and within each role are unlockable weapons and abilities native to that role. “All of the gadgets are itemized; we want players to have options within options,” continued McGuire. “There is a huge amount of player customization, both in their item optimization as well as their cosmetic appearance.”

Back inside the playable game, while I was getting my face handed to me on a silver (yet bloody) platter, I of course didn’t see any of these MMO-esque aspects of player customization, but what I did get to see were solid shooter mechanics inside a slick, beautiful arena. I couldn’t get my head wrapped around the cover system, though given that my colleague John Funk seemed to have a fine time with it, I attribute that more to my own FPS-failings than the game itself. The layout itself had a lot going for it, with spanning balconies and lots of decoration, much of which could be used for duck-and-run tactics. When I was wounded (read: most of the time), there was a countdown on my screen in which a teammate could run up and heal me, really emphasizing team gameplay and awareness. If no teammate were nearby, I could also opt to suicide, jumping ahead to the respawn timer to get back in the game sooner. Fortunately for me, you live a lot more than twice, and a quick respawn allows you a jump back into the game to die another day.

As anyone familiar with TF2, Modern Warfare, or Bad Company would expect, while waiting to respawn, you can change up your role if you find that your team needs a change in their makeup. I found that I was equally terrible with both the long-range Recon and the up-front-where-it-hurts Assault, though I did enjoy the Oracle ability on the Recon quite a lot. It functions effectively as a “wall hack”, temporarily displaying an infrared outline of enemy players through walls to not only the Recon but to their entire team. As a player progresses their character, they will be able to obtain upgrades for not only their weapons but also their abilities, and they will be able to tailor which upgrades they seek to match their playstyle.

All told, I admit I’m still a little puzzled as to how this all ties into an MMO, as having lots of people playing a game does not an MMO make (I’m looking at you, every shooter ever). Given the slickness of the PvP match I played, however, I have every intention of keeping a close eye on this game as it progresses closer to its eventual launch. Even if the “MMO-ness” ends up being simply a glorified chat room for my friends and in-game leaderboards, the exciting PvP and expected mass of customization looks to be enough to catch me up in this secret agent extravaganza.