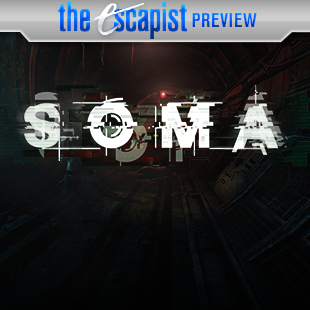 Crawling out of the vent into a dimly lit room, I find a pile of machinery strewn haphazardly beside some computer terminals. What’s unexpected is that parts of the machine are moving – and making unusual noises. I try speaking to it, but there’s no reply. If this was a semi-functional robot, it’s clearly suffered some kind of debilitating injury.

So I turn my attention to the computer terminal instead, which appears to control a radio. Finally! I can call for a way out of this hellhole! But there’s some kind of power shortage preventing the radio from functioning properly. I look around and notice that the robot has plugs running into the black technological “growth” I’ve seen on the walls since arriving here. Hoping for the best, I take hold of a cord and pull it free.

Frictional Games already redefined how video games approach horror with games like Penumbra and its masterpiece Amnesia: The Dark Descent. But for SOMA, Frictional has shifted to science fiction as opposed to the magical psychological horror most fans are familiar with. But don’t worry: In terms of gameplay, themes, and an overwhelmingly unsettling atmosphere SOMA is a worthy follow-up to Frictional’s past work – and might even prove one of its best.

SOMA takes place in a futuristic underwater facility, at least a year after some unspecified disaster forced its operators to seal the doors and abandon it. But this location still had a vital purpose, so the team left minimal power on to run essential systems. In the time since, those systems have taken on life of their own – speaking in human voices, building new bodies, and assembling a robotic ecosystem from abandoned equipment. And you, a protagonist with the worst luck in the universe, have become trapped inside.

Sadly, there’s not much else I can share about the story beyond that. The beta provided to The Escapist supposedly covers the first third of the game, but was jam-packed with so many plot twists that I expected the game to climax and finish after two hours. And to be honest, those twists were so good I would’ve still been happy with that. Instead SOMA just kept going, adding new layers to its detailed world before finally tossing up a “To Be Continued” notice. There’s a reason Frictional Games has been remarkably quiet about SOMA‘s plot for the past two years – everything I could possibly say beyond the above paragraph sounds like spoilers, even though SOMA is incredibly upfront about what’s happening. That being said, SOMA is absolutely worth experiencing spoiler-free for the first time. 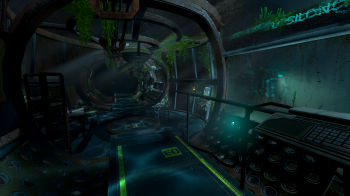 What we can talk about is the gameplay, which is basically Amnesia-refined. You’ll spend most of the game alone, exploring foreboding environments and wondering what threat lurks around the next corner. Nine times out of ten, you’ll be completely alone. But on those rare few occasions when you do encounter a monster, the best approach is to hide and pray it doesn’t notice you. Outside of the obvious physical threat, getting too close to a monster causes your character to panic and distortions to blur across the screen, encouraging you to find a safe corner to tuck into until it passes.

Perhaps the biggest changes SOMA sees are additional refinements to keep the player moving forward at all times. Amnesia was already the Super Mario 64 of horror games, cutting elements which prevent the player from seeing where to go next, but SOMA goes even farther. For example, instead of managing an inventory system, players are given an Omnitool which you can upgrade to access new areas. Sanity mechanics have been axed to focus solely on physical health, and puzzles rarely require you to travel more than a few seconds from any given location.

On the downside, that can make SOMA more linear than Amnesia‘s explorable hub environments. Thankfully, the approach lends to a more focused narrative, either through a piece of dialogue at the right time, or hiding some worldbuilding element in plain sight. Either way, the levels do increase in scope and complexity as you progress, but we’ll have to see how it plays out in the finished game. 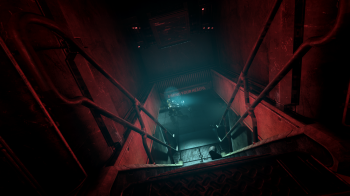 While we’re talking gameplay, let it be noted that I love the health and death mechanics. Horror games have to walk a very fine balance – you must be immersed enough to feel scared, but the second you actually die, that immersion vanishes. How do you maintain that balance without becoming a creepy walking simulator?

SOMA has a clever solution: When you die, your character wakes up a few moments later with greatly reduced health while the monster wanders off. Your health will regenerate, but it’s excruciatingly slow. That means you have one last chance chance to get away before the monster notices you’re alive and returns to finish the job. Depending on your prior health level, that might require literally crawling to safety while trying not to make a single, monster-attracting sound. It’s a tense sequence that maintains the threat of the monster while giving you that extra edge to succeed, and it works very well.

In the end however, what I enjoyed most about SOMA was how perfectly it merged horror with science-fiction. Alien: Isolation was scary, but that’s not horror which reveals uncomfortable truths about technology and human nature. In a world where scientists actually dream of making self-aware robots, a game like SOMA immediately becomes far more relevant and unsettling than it first appears. Outside of games like I Have No Mouth And I Must Scream, this is a rarely explored territory, and Frictional Games is more than happy to take us there.

Whether you visit with the lights off will be up to you.