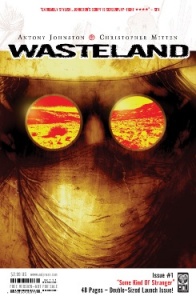 One hundred years after an epic disaster called The Big Wet, the scattered remains of humanity cling to existence in barren desert outposts, scrounging what they can from the lands and ruins around them. Some cling to pagan religion, and there are whispers that humanity is discovering long-lost abilities such as telekinesis, but most of humanity simply tries to survive. Antony Johnston’s Wasteland series is Mad Max meets The Dark Tower , with just a hint of frantic, end-of-the-world mysticism thrown in.

The Escapist: Tell us a little about yourself.

Antony Johnston: I’m from England, I’m in my mid-30s and I’ve been writing professionally for about 10 years. I started out writing RPG supplements after spending most of my school years immersed in rulebooks, then moved on to comics and novels about five years ago. I used to be a graphic designer, until the writing took over full-time. I’ve written 12 graphic novels, two prose novels, lots of miniseries and several short stories for anthologies. I jump around from genre to genre a lot, which some people seem to think is part of a grand master plan, but the truth is I just do it to stop myself getting bored.

I have two tattoos. I used to sing and play guitar in heavy metal bands. Anchovies are the devil’s tagnuts.

AJ: A little of both. The idea for Wasteland had been rattling around inside my head for about 15 years. I’ve always loved the post-apocalypse genre and always wanted to do something in it. But I also knew it would be a major undertaking, so I wanted to make sure I could do it justice.

I’ve been working with Oni for five years, now, concentrating on original graphic novels and miniseries. After doing plenty of those, the subject of an ongoing series came up during a chat with James Lucas Jones, the Oni Editor-in-Chief. I mulled over a few ideas, before wondering if “that post-apocalypse thing” I’d wanted to write for years would be a good fit … assuming I could convince Oni to take a chance on it. Oni prides itself on producing original, unorthodox works that don’t fit into the “comics fanboy mainstream,” and that includes genres like fantasy and sci-fi. Not that they won’t do those genres, but they have to be damn good, and different, for Oni to consider publishing them.

Considering how many times post-apocalypse has been done before, that presented me with a challenge. I knew what I wanted to do with Wasteland was different and uniquely my voice, but how could I get that across?

Eventually, I decided the best way was to simply demonstrate what I wanted to do. So I wrote the entire first issue on spec and sent it to James, which I think took him by surprise. But he liked it, so then I pressed forward with a full pitch and some marketing ideas – the website, a double-sized first issue, and so on. Meanwhile, Christopher did some design sketches based off that initial script.

We packaged the whole thing up and presented it to the other editors at Oni, almost as a fait accompli. I guess we kind of ambushed them into publishing it, in a way, but it all worked out. 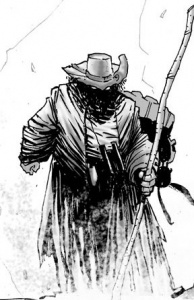 TE: Would you mind giving us some details on the plot so far? What’s the basic premise/theme of the story? How did the world end, and where are we now?

AJ: Wasteland is set in America 100 years after The Big Wet, a disaster that destroyed society as we know it and swallowed half of the country’s dry land. A harsh sun beats down on a new dust-filled landscape, barren of life. What little of humanity that remains is trying to survive and rebuild a society they’ve all but forgotten. The old cities are abandoned and avoided, full of death and disease. New cities have sprung up instead, and new religions have taken root to try and explain what happened – because nobody really knows the truth.

Into this world steps Michael, a “ruin runner” – a desert scavenger, who scours the Wastelandfor anything he can trade. Michael comes across a strange machine that speaks in a forgotten language and claims it can lead him to the fabled land of A-Ree-Yass-I, where legend says The Big Wet began.

That’s the premise. The plot so far is, well, long and pretty complex (and besides, people can read it for themselves at thebigwet.com). Suffice to say that when Michael tries to trade the machine at a nearby shanty town, the creatures he “stole” the machine from in the first place aren’t far behind, and certainly not happy.

TE: So, why go post-apocalyptic? What about that setting appeals to you as a writer?

AJ: So many things. A post-apocalypse world gives you the opportunity to create the world anew, but keeping enough familiar touchstones that you’re not stepping fully outside a reader’s comfort zone. So there’s all the weird stuff – the landscape and environment, the almost mediaeval society of the cities, the new language and slang, and in [the] Wasteland itself of course the psychic powers and the new mythology of The Big Wet – but there’s also persecution of minorities, ideological conflict, violence, betrayal and power struggles. People are still people, you know?

TE: Tell us a little bit about the writing process. What sources do you draw from building the world and the mythology?

AJ: My influences, particularly for Wasteland, are all over the place. A lot of visual influence comes from Richard Stanley’s early work, such as the films Hardware and Dust Devil, and his music videos. It’s also got roots in the 2000AD strips I used to read as a kid, where post-apocalypse was a constantly popular genre, and they had some beautifully gritty artists to work on them.

The story has influences in just about everything, from movies to books to comics to TV. Mad Max, Pitch Black, When Gravity Fails, Preacher, The Shockwave Rider, Escape From New York. … It’s hard for me to point at just a few things and say they’re a big influence, because Wasteland has been germinating for so many years.

One thing that may surprise you is how much music plays a part. Music’s a big influence on me in general, and a lot of my favorite bands and songs have found their way into Wasteland. Fields of the Nephilim, Covenant, Paradise Lost, Testament, Front 242 and more have all played their part, not just in the mood of the book, but also the story in some cases.

The mythology aspects are drawn from a wide and disparate variety of sources and ideas – the Sunners have parallels to some native American traditions, but also to the Christian mythos. There are Celtic and Norman aspects to the rule of Marcus, in the city.

And the way the story is told owes a big debt to some of the excellent serial TV drama we’ve been blessed with in recent years, like Lost, The Wire, Battlestar Galactica and Veronica Mars. The early seasons in particular of those shows were a big influence on the storytelling and pacing of Wasteland as I was pulling it all together.

It’s all one big mash-up, really. Everything goes into my head, gets bashed about like a pinball machine and then comes out the other side in what I hope is a coherent form. 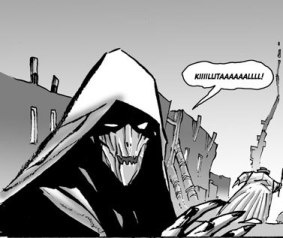 TE: While the world itself is pretty unique, Wasteland has several themes in common with post-apocalyptic movies/literature/games: The lone hero, the steamy desert wasteland, humanity falling into near-illiteracy and clinging to survival in these isolated hamlets, lost technology as relics, etc. Why include these in your work? What is it about these themes and symbols that make them such touchstones in the post-apocalyptic genre?

AJ: I think probably because, as I said before, a lot of the appeal of post-apocalyptic stuff is that you can create a whole new world, almost from scratch. To be able to do that, the “apocalypse” part – without which there’s no “post” – has to be something absolutely devastating, something that could literally destroy the old society and its rules. It’s a bit of a vicious circle.

Not that you can’t make a post-apoc book without those elements, of course – Y: The Last Man is a perfect example of the genre with a novel form of apocalypse, and consequently doesn’t have those genre touchstones in the same way that something like Wasteland does.

But I like taking people’s expectations and twisting them. Everyone who picks up Wasteland thinks they know what it’s going to be like, and what they’re going to be reading, because they’ve all seen or read some post-apocalyptic fiction at some point. And then, if they continue reading, they realize it’s not like that at all. It isn’t just about a grim bloke in a trench coat.

TE: Tell us about the religion, the Sunners, “Mother Sun”, “Father Moon” and so forth. What’s the history of the religion in the world itself? Tell me about building the religion.

AJ: Few things are as much fun to construct as a new religion (just ask L. Ron Hubbard). There are so many allegories you can make in the mythology and so many sources to draw on for the stories and origins that it’s just out and out fun. I think the fact that almost every otherworldly book I write contains at least one major new religion is a bit of a clue to how much I enjoy doing it. I’m as atheist as they come, but maybe that’s why I like it so much.

The Sunners believe The Big Wet was caused by man’s hubris. Man believed he no longer needed the natural gifts of Mother Sun and Father Moon, and shunned them. Mother Sun and Father Moon even sent their children to mankind, to impress their beauty upon the world, but mankind rejected and killed them. The children cried out, and their tears drowned the world, and it was called The Big Wet. Then Mother Sun sent fire raining down from the sky and ruined the cities. Father Moon hid the heavens from mankind’s sight and poisoned the oceans.

The world was destroyed, and now mankind must redeem itself in the eyes of Mother Sun and Father Moon to be redeemed. When that happens, Mother Sun will embrace mankind in her fiery bosom and take them all up to live in the heavens forever.

How exactly that redemption is supposed to come about is just one more thing nobody knows for sure. The Sun-Singers, who lead the faithful in “sings” to praise Mother Sun and Father Moon, might know. But if they do, they aren’t letting on. 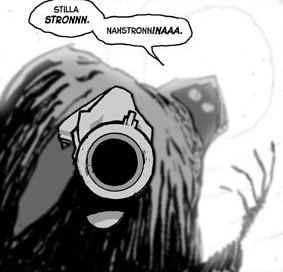 TE: In addition to the almost pagan – in the Old World, nature-based sense – religion, it seems like humanity is developing powers like telekinesis, healing and so on. How did that come about, in terms of in-world story?

AJ: That would be telling …

TE: How did the world end, if it’s not giving too much away?

AJ: And that would be giving the entire series away. Sorry, no comment.

TE: Ultimately, one of the major themes in post-apocalyptic literature is hope, be it the lack thereof or the chance at a return to paradise after this fall of man. Is there any hope for your characters?

AJ: Mmmmmmmaybe. But I wouldn’t bank on it. I’m a pretty bleak guy.