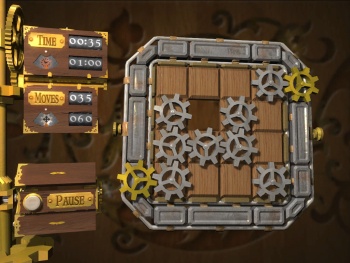 Sony hopes to both appeal to new audiences and recapture old ones with a series of experimental, multiplayer-focused additions to Playstation Home.

While it is an interesting experiment in social networking, Sony’s Playstation Home service has been repeatedly derided for its lack of content. Interested in changing this perception, SCEA has struck a deal with the independent development label Codename to bring a series of exclusive multiplayer titles to the service. The first four games, developed by “a mix of fan-favorite, die-hard experimental and undiscovered first-time developers,” will launch over the next few months.

The first of these, Dueling Gentlemen, is a strategy title from The Odd Gentlemen, creators of the acclaimed P.B. Winterbottom. Players will outsmart their opponents and win a “old-time battle for honor and prestige” on a giant stage in Home‘s plaza. Lazy8 is putting together a multiplayer version of their Cogs in 3D. Cogs is a Steampunk-inspired puzzler, and the multiplayer remake will apparently transform this experience into a “dynamic public spectacle.”

Codename, itself, is releasing Super Awesome Mountain RPG, a blending of board game and fantasy RPG where players create custom animated figurines and race them up a massive mountain. Finally, Indiecade award winner Peanut Gallery is putting its talent behind Minor Battle, a capture-the-flag platformer where two teams run around a four-screen cube.

According to a Sony spokesperson, the goal of the Codename deal is to boost on the social elements of Home, emphasizing the ability to “share, interact and communicate with new and existing friends.” The publisher has noted that, having hit fourteen million users, Home is at a critical point at its lifecycle. They hope that these new multiplayer offerings will both attract new audiences and retain current users.

Science!: A Look at Moonbase Alpha