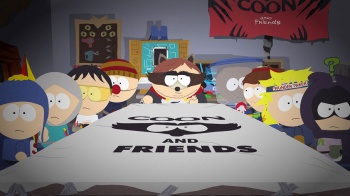 South Park may eventually find it self off the air and on your game system permanently.

So while the first run of South Park games – tie-ins for the Nintendo 64 era – weren’t so great, the last one, Fractured But Whole also looks like it will be pretty sweet. Series creators Matt Stone and Trey Parker are really happy with this latest South Park video game series, so much so that the future of the TV show may actually be in video games.

“We also know that [games] might be the future of South Park. This might be where things are going,” Trey Parker said in an interview with Entertainment Weekly.

“I think in 20 years, 10 years, people will be playing more. That convergence of entertainment, whether it’s VR or a more immersive thing. The more you get in it, the more you watch Pew Die Pie, and people watch Pew Die Pie play, and you watch E-sports. You watch young people, and the way they engage with something – sh-, maybe that is the future of South Park,” added cohort Matt Stone.

The pair talked a lot about making a game vs. making a show or a movie, and how video games simply allow them to do things and follow story threads that other media cannot. In fact, The Fractured But Whole was initially set to be another South Park movie, but Ubisoft convinced the pair to make a game instead.