One of the most conspicuous casualties of television programming in the age of 24-hour cable and internet broadcasts (in the United States, anyway, apparently this sort of thing is still big business elsewhere – good for them) has been the Holiday Special. Oh, they still exist – but they certainly aren’t the cultural force they used to be. Most of those still in rotation hail from the late 1960s to mid-1990s, appropriately encompassing the childhoods of the three “Raised-By-The-Tube” generations.

The basic idea was all about profit: Produce a modestly-budgeted “special event” (as opposed to a “big episode” of a popular show) themed around an approaching holiday and promote the hell out of it, hopefully ensuring a big audience and thus selling commercial time for a higher price. In the days when not everything was ever guaranteed to be available on VHS (unless you taped it yourself, of course), “specials” were a huge event – want to see a man (or woman) in their 20s get glassy-eyed and nostalgiac? Ask them if they remember which ancient commercials were on their home-taped version of Rudolph or The Great Pumpkin. This one was mine.

There were specials for damn near every holiday, but unsurprisingly the two most popular in the U.S. were for Christmas and Halloween – the dual light/dark sides of celebratory consumption. I’m sure we’ll get to Christmas later in the year, but for now I figured it’d be fun to look back on some of the most memorable and unusual.

The genre existed before this, but Pumpkin is usually seen as the ur-text of Halloween Specials. So much of what made the animated TV adaptations of Charles M. Schultz’s legendary “Peanuts” comic has bled into the popular culture – the genial compromise between cynicism and hope, the dream-logic genre-mixing, the whole gag of young children thinking and speaking like world-weary adults – it’s incredible that they hold up. But they do, and apart from the unassailable Christmas installment, this is the best one.

It’s hard to believe that anyone hasn’t seen this, but just in case: The story – a spotlight moment for Linus van Pelt, the Ron to Charlie Brown’s Harry – is basically a moody, almost morose comic send-up of secular mythology figures. While the rest of the Peanuts gang makes ready for trick-or-treating, Linus is obsessed with proving the existence of The Great Pumpkin, a kind of Santa/Easter Bunny for Halloween that seems to be a creation wholly of his imagination. This being Peanuts, things don’t so much resolve as they do slowly fade into conclusion, though it provides a welcome window into how Linus’ eternal optimism and childlike (compared to his friends) outlook sustains him – and how his friendship with his apparent polar opposite, Charlie Brown, works.

After How The Grinch Stole Christmas, children’s book writer Dr. Seuss became a TV brand unto himself, and participated in spin-off productions based on his style and/or characters, but not necessarily based on specific books. This semi-sequel (prequel, maybe?) to The Grinch is one of the more obscure – usually eclipsed by 1982’s more well-remembered The Grinch Grinches the Cat in The Hat.

It’s really more of a “scary autumn” special that a specifically Halloween-themed piece, and for a while VHS/DVD releases simply called it Grinch Night. The reason for its relative obscurity isn’t difficult to figure out – it’s uneven, and not a lot happens until about the halfway mark, but if nothing else it’s fun to finally get an idea of why the Whos are so damn scared of The Grinch to begin with. Here, he’s treated less like a cranky hermit and more like a demonic force of nature.

As the film opens, a meteorological phenomenon called “sour sweet wind” has the whole place running for cover, as it indicates that The Grinch is making a trip to the town – armed with a wagon full of dark magical forces ominously referred to as “The Paraphernalia Wagon.” A young Who boy sets out to delay the assault and winds up inside the wagon itself, where he’s terrorized by surreal visions, shifting reality and some of the creepiest behemoths ever to lumber out of Seuss’s sketchbook. This sequence is more or less the meat of the special, and absolutely worth seeing in a trauma-inducing Willy Wonka’s scary-ass tunnel kind of way. 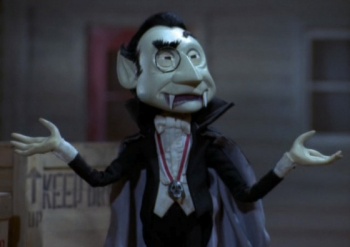 And then there’s this oddity, a TV-movie co-production between Central Independent Television and HBO from a children’s book series by Jill Murphy that became a traditional special on the Disney Channel up through the 90s.

Best described as a female-centric version of Harry Potter, the story concerns an accident-prone pre-teen witch (Fairuza Balk, yes, from The Craft, ha ha) whose misadventures at a Witch Academy land her in the middle of an evil conspiracy and into the good graces of the Good Witch’s leader, the (unfortunately named) Grand Wizard.

Said Wizard, incidentally, is played by the great Tim Curry in full-on high-camp vamp mode, which seems to be most of the reason this is remembered today. Check it out.

Rankin/Bass animation studios was best known for making stop-motion Christmas specials for TV, but in 1967 they tried taking the act to the big screen with this animated comedy send-up of the Universal Monsters. It wasn’t exactly a hit, but it found new life revived as a special and, subsequently, as a cult classic.

The plot: Dr. Frankenstein invites the usual assortment of public domain movie monsters (Dracula, Frankenstein, Wolfman, Gill Man, Invisible Man, Hunchback, Dr. Jekyll and “It” the giant gorilla) to a party announcing his retirement and naming his nerdy nephew as his successor. The new kid is too nice for the monsters’ liking, so they plot a coup.

The truth is it kind of drags at points, but when it’s on it’s kind of a uniquely trippy delight. It’s very mid-60s, with topical inside jokes, fourth wall-breaking and Phyllis Diller as a celebrity guest voice. Think of it as the Austin Powers version of The Nightmare Before Christmas, and it even makes for a great party movie. R/B eventually did an official TV special follow-up, Mad Mad Mad Monsters, which few people recall.

Mercury Theatre’s War of the Worlds(1938)

Yes, technically, a radio special. But given that this is probably the most famous Halloween Event ever, and possibly still the biggest broadcast prank ever pulled, how can it not rate a mention?

Here’s what happened: On Halloween Night, 1938, Orson Welles (yes, that one) and his fellow members of the Mercury Theatre radio show decided to stage a radio play adaptation of H.G. Wells’ alien invasion classic War of The Worlds. Ever the showman, Wells’ gimmick was to stage the first two-thirds of the play in the form of a live news broadcast, with a news anchor reporting on an invasion of Earth (New Jersey, specifically) by ray-gun toting Martians. Listen to some of it. By all accounts, they did a good job.

Too good, actually. Though stories as to the extent of the phenomenon vary wildly, it was soon discovered that many people tuning in either briefly or only partially to the broadcast believed what they were hearing was an actual news report – and some had either gone into hiding or taken to the streets to fend off what they thought was an actual Martian attack. Reports of the confused citizenry promoted a national mini-outrage, and though the controversy turned him overnight from radio’s boy genius to an international celebrity, Welles was ultimately called before Congress to offer an explanation and apology to the American people.

The special had a far-reaching effect on not only American culture, but on the entire world. Adolf Hitler cited it as an example of American decadence and gullibility, and to this day some conspiracy theorists believe that it was actually a secretly-funded experiment in psychological warfare. To date, the only broadcast special to achieve similar infamy was the BBC’s infamous classic, Ghostwatch.

Killers Confess in World of Warcraft

Robot Vans Drive Themselves to China