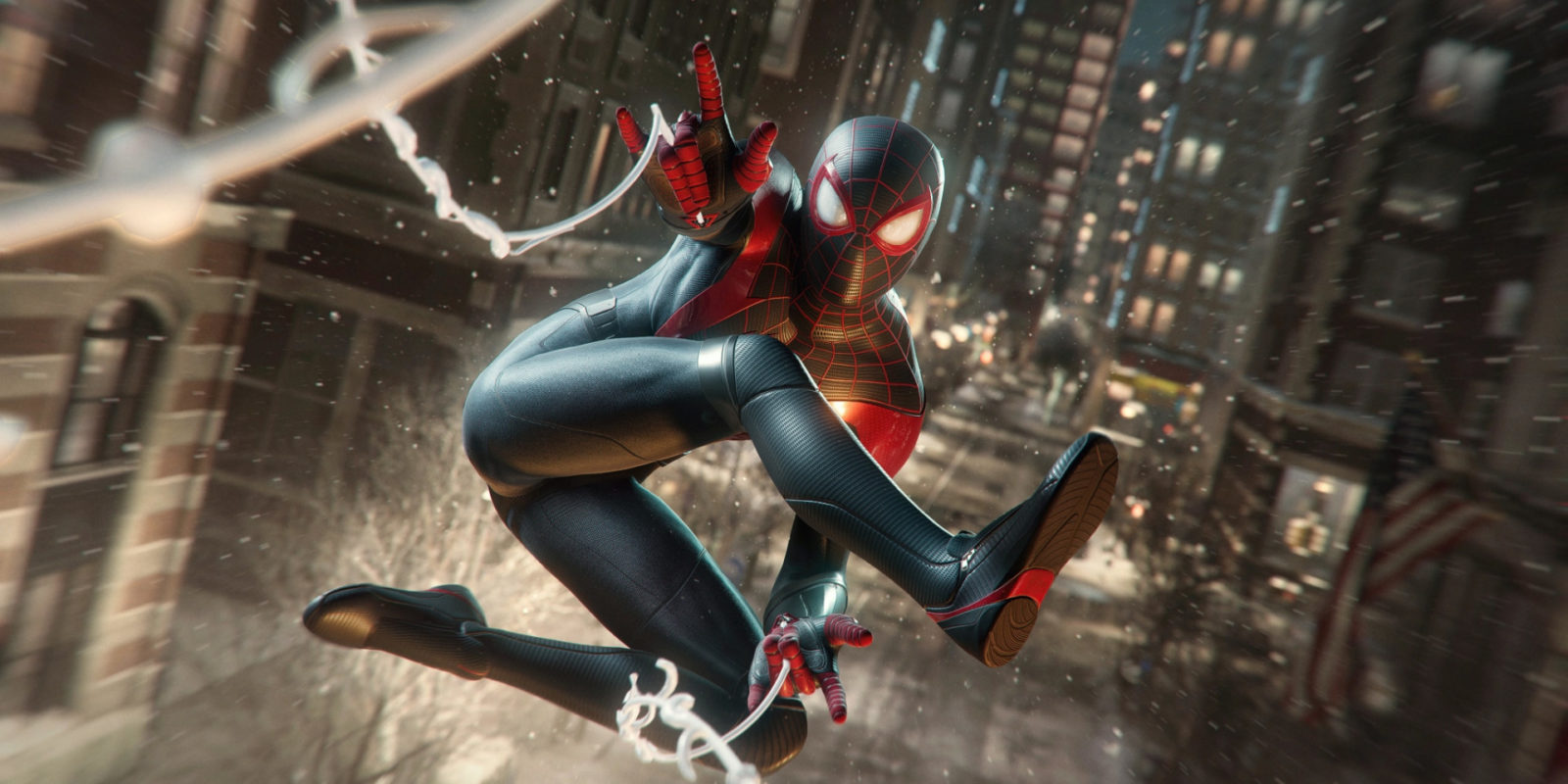 It’s been a good decade for Miles Morales. Born of the successful Ultimate Spider-Man comics line, Marvel’s most recent iconic black superhero has starred in the award-winning Spider-Man: Into the Spider-Verse and is now webslinging his way onto your PlayStation 4 and PlayStation 5 in Insomniac Games’ Spider-Man: Miles Morales. But is this standalone side-story nothing but an appetizer for the mainline sequel we all know is coming? It depends on what you’re looking for.

Spider-Man: Miles Morales is a story about family heritage. In the wake of his father’s death, Miles and his mother Rio move back to his grandmother’s apartment in Harlem to try to restart their lives. In the middle of all of this, the original Spider-Man goes on a work trip to Europe, so Miles is the only Spider-Man left to hold the line. Luckily for Miles, he’s started to develop new abilities of his own, like electrical venom blasts and the ability to briefly cloak. He’ll need every trick up his sleeve, as the megacorporation Roxxon and the technomancer Tinkerer’s Underground go to war for the future of Harlem.

Simultaneously, Miles’ mother is running for city council and bumping heads with both groups, and some old friends walk back into Miles’ life too. It’s a lot for one Spider-Man to handle, making for a story both bombastic and resonant as the battles across Harlem hit close to home for Miles. While the original Spider-Man is a well-told yarn, it was also fairly predictable and drawn out over 30 hours, whereas Spider-Man: Miles Morales takes around eight to 10. The shorter runtime works wonders for the game, as side missions and plot beats are more interwoven. You really get to know the people of Harlem, many characters organically appearing in the background of other scenes, lending a tangibility to the world that invests you in becoming Harlem’s protector. 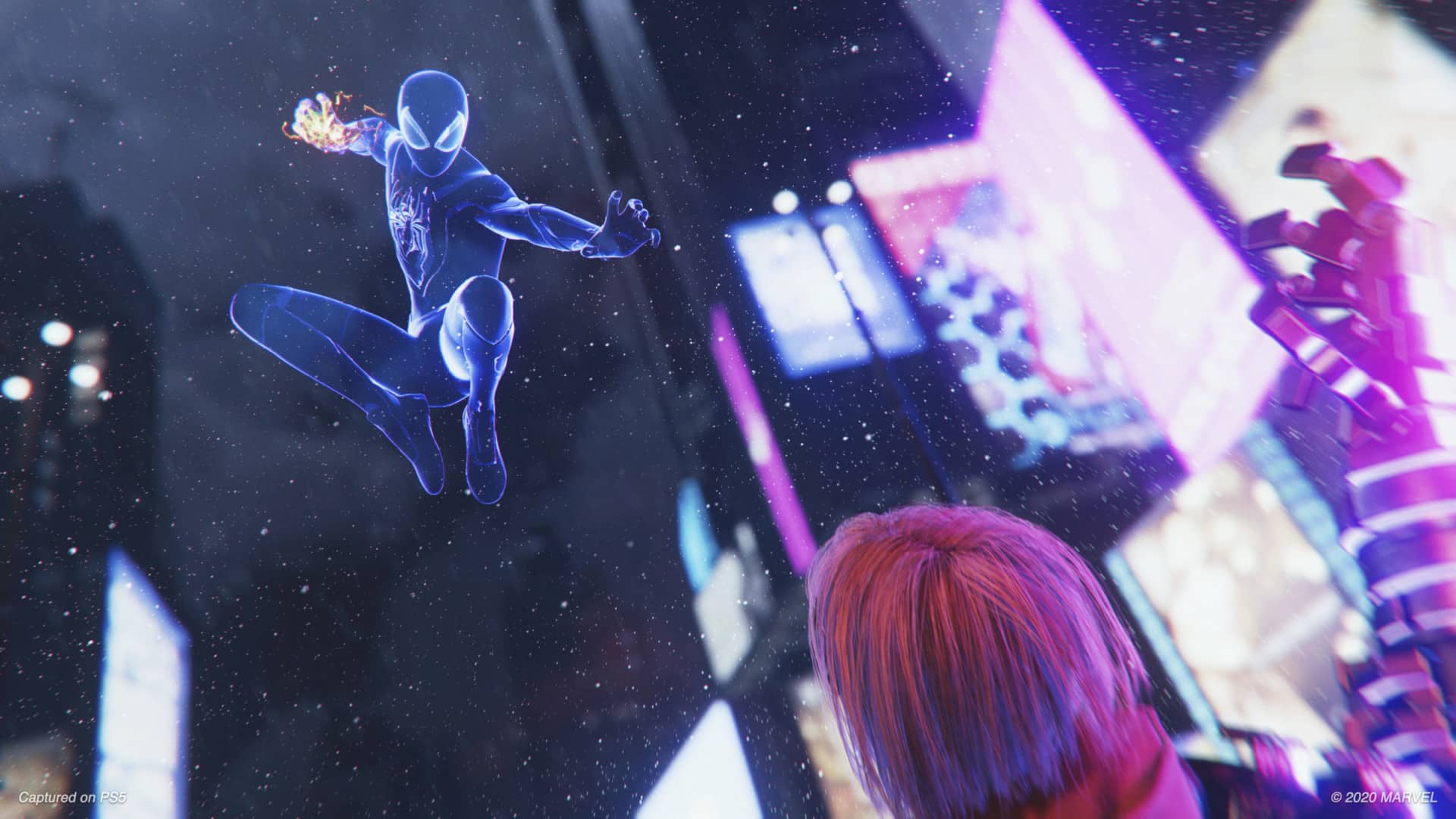 At this point, first-party Sony titles are known for high-quality voice acting and motion capture, but it can’t be understated how stellar this cast is. Nadji Jeter, Jasmin Savoy Brown, and Ike Amadi in particular are absolutely fantastic, each lending humanity to every scene and acting off of one another organically. Miles Morales dares to dream a bit bigger and more optimistically than its predecessor too. It achieves an impressive balancing act, given the game’s themes of gentrification, late-stage capitalism, and the exploitation of well-intentioned workers by CEOs.

The only real weak spot in the story is Troy Baker’s Simon Krieger, head of R&D at Roxxon. There’s so little to him that Baker has nothing to work with, feeling like a low-energy parody of the villains Baker’s portrayed in the past. The finale also is a tad drawn out, with the final boss being about two phases too long for their own good. That said, overall, Spider-Man: Miles Morales is an improvement in any respect.

Insomniac has clearly put a considerable amount of time into refining the gameplay of Spider-Man to address complaints. Many of the needlessly grindy and bloated elements have been removed wholesale or narrowed down considerably. Your focus meter, once primarily charged by getting into fisticuffs, now charges from practically any combat option. Better yet, your set of new venom attacks draws from the same focus meter, so there’s a risk/reward element to heal or save up for a devastating attack. Venom attacks, while simple to execute, need to be wielded tactfully to get the most out of them, and you’ll want to, as Peter Parker’s dozen or so gadgets have been trimmed down to four. They’re still useful gadgets, but you’ll miss impact webbing before long. 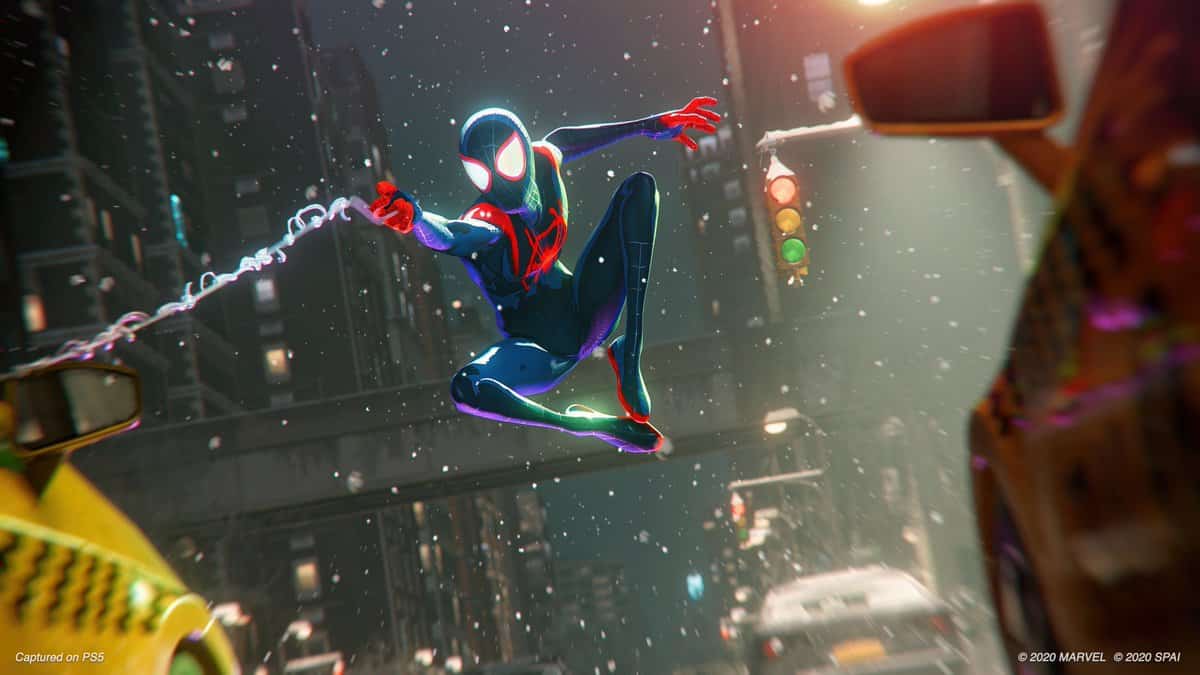 Also improved is the token system through which you can unlock new suits, suit mods, and gadget upgrades. Except instead of half a dozen tokens that might not even seem related to what you’re unlocking, Spider-Man: Miles Morales has two — Activity Tokens and Tech Parts. You get Activity Tokens from doing practically any missions, whereas Tech Parts comes from the Underground’s tech caches.

If you’re not interested in going on a scavenger hunt through the city or have absolutely no Spider-Hams to give about chasing pigeons again, you can skip those and still enjoy the core experience. There are nice rewards for those who 100% everything, including nods to Into the Spider-Verse and several of Miles’ comic book spin-offs like The End, but it’s not required. There isn’t a checklist of things you have to do to actually start enjoying the game.

Additionally, on the initial hardest difficulty offered, Spectacular, Spider-Man: Miles Morales offers a terrific, measured challenge. Not since Batman: Arkham City has a game’s boss fights and standard encounters felt so well balanced, let alone in sync with what players will naturally do. A single street fight can take you out if you’re not careful, but artful use of timed dodges, your cloak ability, and venom blasts opens up a satisfying array of possibilities. They’re simple differences, but they make an impact, as do the new foes you’ll face.

To be fair, the Underground is essentially reskinned versions of enemies from the Demons from the last game, but by de-emphasizing gadgets and rewarding evasive tactics, they feel fresh. Plus, the absence of irritating jetpack opponents is a major blessing, ironically making airborne tactics far more viable, in turn making you feel more like Spider-Man. 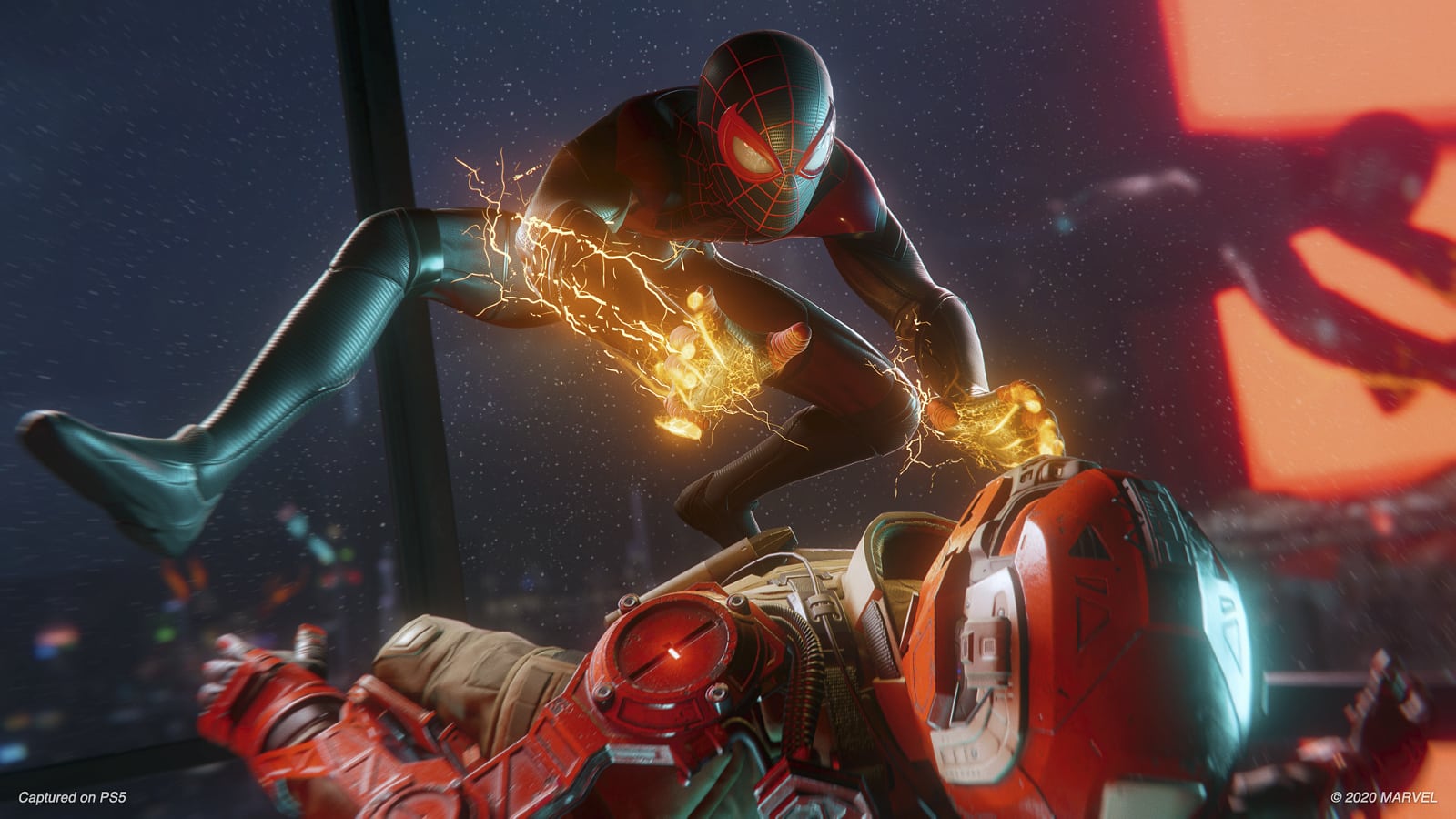 Boss fights are also either built to account for multiple strategies or are clever tests to push your skills in a new direction, offering fascinating wrinkles every time they come up. One boss fight at the end of a particular quest chain even forces you to get extremely aerial to stay alive and was a welcome surprise.

It’s equally great to see Spider-Man: Miles Morales rarely rely on Hollywood-esque set pieces, saving these for crucial story moments rather than interrupting organic gameplay with them. This also leads to the game’s attempt to patch up its predecessor’s sparse stealth mechanics. This time around Miles has a few more options, including some suit upgrades that are worth investing in, but it’s still not quite on the level of Amazing Spider-Man 2’s stealth sections. It’s definitely tighter now than Spider-Man Noir’s levels in Spider-Man: Shattered Dimensions, but as a title built for a console two generations on since then, that’s not hugely impressive.

Regardless, Spider-Man: Miles Morales runs incredibly well on even an original PlayStation 4 (though it will pump out some serious heat). It’s an amazingly solid optimization job, with fast travel from one end of Manhattan to the other occurring in often under 10 seconds. Other than the odd pause for loading or minor texture pop-in on background assets, you’re getting a full experience. Meanwhile, on PlayStation 5, load times all but cease to exist, and you can enjoy stunning reflections and lighting across surfaces thanks to ray tracing, among other graphical improvements.

It’s hard to imagine going back to playing as Peter after stepping into Miles’ shoes. Bashing a heavy enemy to the ground with venom after he’s gotten in your way, cloaking yourself out of trouble and then ambushing enemies from a new angle, and even just the joy of some Spider-Man 2-esque traversal challenges all make for a great time. By virtue of its smaller scale, Spider-Man: Miles Morales is a tighter, better designed package. It might not boast as many hours of content, but what it has is far more worth your time. If you felt the original Marvel’s Spider-Man was a bit average or too bloated with open-world gaming cliches, Miles Morales might just be what you’re looking for. 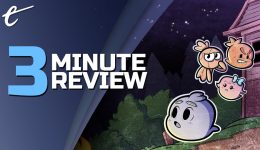 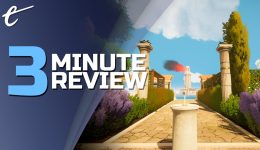 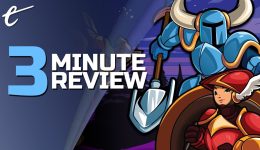 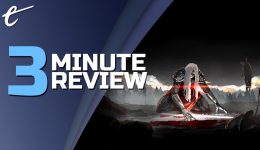