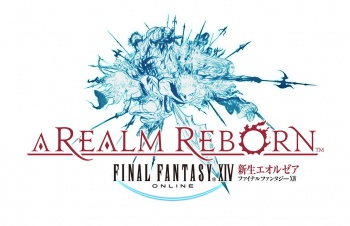 Final Fantasy is a franchise that features storytelling, strong characters, and some of the most memorable moments in gaming history. With that success, though, comes intense pressure to continue delivering mega-blockbusters. MMO Final Fantasy XIV (launched in September 2010) was a rare misstep in the hallowed series: a rushed release, a long-delayed PS3 version, an overall negative reception by gamers and critics, and finally, the bold decision to pull the plug on the game and rebuild the entirety of FFXIV from the ground up. It’s a risky move, but one that Square-Enix felt was necessary to rescue a game that pretty much launched already on life support.

I spent some time with Square-Enix on Valentine’s Day in the heart of San Francisco, checking out the new, improved FFXIV: A Realm Reborn, and I’m happy to report the game seems to be headed in a much clearer and stronger direction than the 1.0 version. Naoki Yoshida (named FFXIV‘s director and Lead Producer in 2010 shortly after FFXIV 1.0 launched) was visibly proud of what he had to show us, and spoke not only as a fan of Final Fantasy, but of MMOs in general. This guy knows his MMOs, citing Ultima Online as the first MMO he ever played, and mentioning what an impression it made on him.

When Square-Enix notes that this is the first time an MMO has been completely rebuilt and relaunched, Yoshida jokes, “And I’m not planning to do it again!” There’s a genuine excitement amongst the team here, and they seem to be taking the gravitas of their daunting task in stride. Everything’s been updated for ARR: the graphics engine, the servers, the battle system, the UI. You name it, it’s been revamped. The original 8 zones have been carved and expanded into 40 areas, and those zones have been stuffed with more everything.

The last moments of FFXIV 1.0 were a world event where Bahamut unleashed a cataclysmic strike on the world of Eorzea. The aftermath of that strike is where ARR picks up; it’s been a full five years after the devastating events of FFXIV 1.0, and players will experience three main story arcs on their journey. Yoshida promises many nods to classic Final Fantasy elements, like the Crystal Tower from FFIII as a raid location and the Golden Saucer from FFVII (to be added in a later patch). There are even plans for chocobo breeding in the future (!), and winks to classic summons, spells, and armor from past titles. There’s a lot of nostalgia attached to the 25 years we’ve known Final Fantasy, and Yoshida plans to remind players of the things that made them fall in love with the franchise as they roam Eorzea.

My time spent playing FFXIV: ARR was brief, but really showed off how hard the team has pushed themselves since announcing their plans to relaunch the game more than 15 months ago. I wandered the starting area, leveling up and learning the new battle and UI systems. Combat is much faster this time around, and feels a lot more organic and visual, thanks to updated ability effects. The UI was pretty run-of-the-mill for a standard PC MMO.Yoshida also showed us the UI tailored specifically for the PS3’s controller, and it seemed to be far more useful than a straight port of hotbars and endless target cycling. 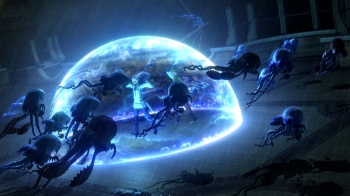 Graphically, the game is gorgeous. The textures and rendering are greatly improved from the 1.0 build, and attempts to more closely match what you see during cinematics. We were treated to a side-by-side comparison of some of the locations and how they’ve changed from 1.0 to ARR, and it’s quite a big difference. Cities now feel “lived in,” with NPC interactions and the ability to enter buildings that were just facades before. Square-Enix specifically mentioned the night sky, previously only available to high-end PC builds, would not only be dramatically improved but made available to even those playing on budget PCs

One of Square-Enix’s new features in ARR is the FATE (Full Active Time Event) system. It’s a spontaneous world event that pops up as you quest, and anyone in the surrounding area can participate (regardless of group status) and get loot/exp for it. The first FATE we encountered was in the starting area, and was a small kerfuffle between duelists. Later on, as we roamed the lands with a level 35 Archer, we happened across a FATE involving monsters … lots of monsters. Of course, that prompted me to ask Yoshida if we’d be seeing a mammoth Cactuar in a FATE, which elicited a big laugh as he responded, “They have few polygons, so it would be easy to make!”

As for cross-server play, you’ll be happy to hear that ARR will support cross-platform accounts – whoa! – so if you’ve got a hankering to laze around on the couch with your Lancer after a long day of questing, you’ll be able to do so if you have both the PC and PS3 versions. This also means you won’t have to feel locked into a platform if your friends are die-hard about either console or PC play, as you’ll be able to play alongside them regardless of what system they’re using to access the servers. A Mac version is also in the works, but Yoshida insisted that because the 1.0 launch of FFXIV never made it to PS3, that those players deserved to have the game launch on day one with the PC version – a nice way of appreciating the console fans who waited years for this game, suffered delay after delay, then ended up disappointed it never found its way to their living rooms.

If you’re one of the brave souls who purchased the original FFXIV, Square-Enix is planning to offer a variety of perks as thanks for getting into the game at ground zero: A special chocobo mount, a discounted monthly subscription fee, and a free download of A Realm Reborn were some of the items mentioned. It’s not a magical “I win” button, but it’s a nice gesture on the part of Square-Enix, and goes a long way to help patch things up with 1.0 players, many of whom left the franchise with a bad taste in their mouths.

The short time I had with Final Fantasy XIV: A Realm Reborn offered some real glimmers of hope and redemption; I had a great time seeing familiar FF “faces” (Moogles, chocobos) as I ambled around. But whether ARR can truly capitalize on the vault of FF lore and create lightning in a bottle is a question that can only be answered by a solid launch, great content updates post-release, and a rabid fanbase. I’m cautiously optimistic Square-Enix is making the changes necessary to create the living, breathing Final Fantasy universe fans have been clamoring for, but as always (and especially with MMOs), only time will tell if ARR is a success.

Final Fantasy XIV: A Realm Reborn will be available for PC and PS3 in Summer 2013, and will require a monthly subscription. There will be four phases of the beta, the first two will run on the PC before they start integrating the PS3 with phase 3 in a closed test. The first beta phase begins Monday, February 25th, 2013 on the PC and you can signup for it here now.