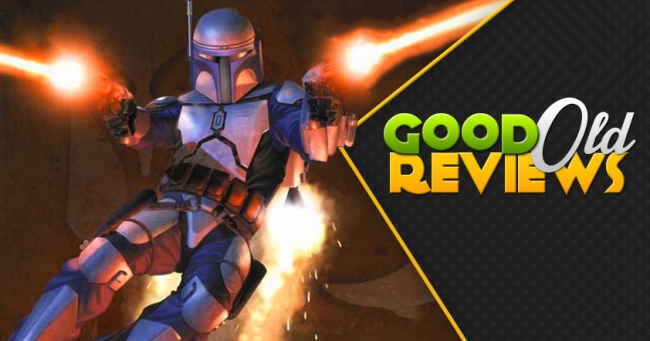 Yes, the Star Wars prequels were bad films. The fans know it, the critics know it, and most people involved in their productions have accepted it. But while the movies were flops, the timeline around them proved far more interesting. For a brief window, the Star Wars Expanded Universe produced novels, comic books, video games, and two rock-solid Clone Wars TV series that made fantastic use of prequel characters, generating more positive acclaim than the films themselves

Take Star Wars: Bounty Hunter, a PS2-era game Sony re-released for PS4 this week. On the surface, Bounty Hunter is an obvious cash-in of the Star Wars license. It stars Jango Fett, the notorious Episode II henchman who added very little to the film. Its lackluster visuals and confusing controls smack of a rushed production time – which seems likely, considering it launched mere months after Attack of the Clones.

Yet despite it all, Star Wars: Bounty Hunter is an absolute blast. It tells a strong story, has some unique gameplay mechanics, and is still fun to play 14 years later. Following Jango as he shoots, somersaults, and jetpacks through enemies feels exactly how you’d imagine a badass Star Wars character should behave. The writing even makes Jango an interesting protagonist, one who’s grimly pragmatic, but not so unlikable that you can’t cheer for him. With a little more time and polish, Bounty Hunter could’ve been one of the best Star Wars games ever made – one that ensured Jango Fett wouldn’t be quickly forgotten.

Star Wars: Bounty Hunter opens several years before Attack of the Clones when the Bando Gora cult threatens to disrupt galactic industries. This is a major problem for Chancellor Palpatine, whose plans to found an Empire are dependent on having industries available to fuel a civil war. In response, Count Dooku places a five million credit bounty on the Gora’s leader, a Dark Jedi named Komari Vosa. That’s a challenge the notorious bounty hunter Jango Fett can’t refuse – but neither can his rivals, each of whom are racing to get to Vosa first.

When the game begins, Star Wars: Bounty Hunter feels like a fairly average third-person shooter. The action mechanics are functional, but basic in terms of strategy. The color scheme feels faded and grey, which is rather dreary compared to Star Wars‘ vibrant setting. The graphics aren’t much to write home about – even the updated PS4 resolutions can’t salvage that. On top of that are various control issues: Specifically, the button placements are confusing, cycling between weapons is time-consuming, and the camera keeps zipping behind Jango’s head when you’d rather look somewhere else.

But after a mission or two, something strange happens – you start to feel like a legitimate Star Wars badass. Perhaps it’s the autoaim feature, which points Jango’s weapon at the closest enemy, even when they’re off screen. Perhaps it’s how Jango’s dual blasters can fire in two directions, letting you fight multiple opponents at once. Perhaps it’s the fact that tapping the shoot button makes Jango fire even more rapidly than holding it, unleashing chaos across the battlefield. Whatever the case, even last-ditched shootouts against a dozen aliens on your last-health point can become victories if you’re quick on the draw. It even counters that camera problem I mentioned – why worry about sightlines when Jango can aim just left of the screen and make a successful kill? 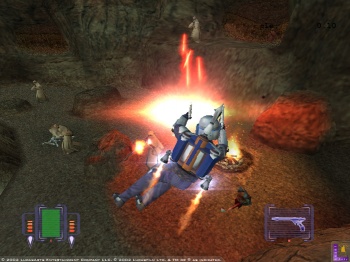 Twenty minutes into the game, Jango gets his jetpack, and Bounty Hunter gets even better. Much like the film, it provides Jango with upward mobility, fast-travel, and lets him shoot in every direction while airborne. That’s exactly as fun as it sound, and it doesn’t hurt that level designs make good use of the features. My favorite example is the second mission: It opens with Jango exploring a city surface on foot, retrieving his jetpack, and then flying overtop the same buildings while chasing his bounty. Sadly, those camera problems I mentioned make it hard to keep track of your quarry, but overall the jetpack is a great touch that brings Bounty Hunter to life.

Speaking of bounties, Bounty Hunter isn’t some meaningless title – NPCs are scattered across each mission with lucrative bounties on their heads. Scanning them from a distance tells you whether a bounty is available, what they’re worth dead or alive, and any biographical details from the bounty poster. Some targets are civilian NPCs, minding their own business while you complete primary objectives. Others are foot soldiers among your primary enemies, meaning you might kill them by accident if their partners start a firefight.

Bounty hunting goes a long way towards mixing up routine action scenes. It encourages you to keep your distance from enemies at first, scoping out potential targets and generating an attack plan. If they must be captured alive, you’ll need to decide whether to take them out last (so you don’t aren’t shot in the process) or capture them first (so you don’t shoot them by accident). Even when Bounty Hunter isn’t dropping you in heavy firefights, stalking lone targets makes the game more engaging. There’s an entire civilian section in Coruscant to explore and capture bounties – one of whom gave me an impressive chase across the entire map before I caught up with my jetpack. 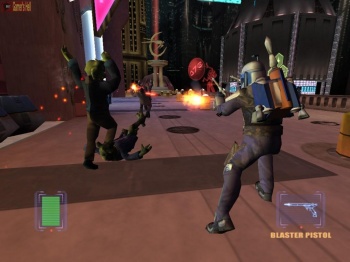 Outside of gameplay, bounties also have a rich narrative function. The simple display text from each bounty description shares stories of the larger Star Wars universe – some of which aren’t very pleasant. At one point, I scanned an unassuming Twil’ek, only to find she was an escaped slave with connections to an Underground Railroad movement. More importantly, she was wanted alive, which meant the Hutts who posted her bounty would torture her for information. That’s an impressive amount of backstory for a character who doesn’t have any significant dialogue, and it actually made me question turning her in. Of course, Jango himself is a pragmatic individual, so the game won’t judge you for earning a few extra credits.

If you’re more interested in epic Star Wars battles, don’t worry – Bounty Hunter has some fantastic set pieces. You’ll fight enemies in remote forests, towering skyscrapers, and a huge variety of worlds. Missions range from executing a prison break to breaching the stronghold of a corrupt Republic senator. Boss characters include alien creatures and giant vehicles covered in heavy armaments. And through it all, Jango is a force to be reckoned with. Once you have a handle on the controls, he’ll roll past enemies, pop back up to open fire, and dodge for cover using your jetpack. All of his weapons from Attack of the Clones are featured here, from his flamethrower to a bounty grabbing cable, and all have practical functions beyond looking impressive. The fights themselves are dynamic and exciting as well. On more than one occasion, I was knocked from a nearby ledge, grabbed the edge to keep from falling, rocketed up to safety – and dove back into the fight, where it might happen again. Even if Jango is the villain, that’s pure, distilled Star Wars action.

Whatever you think of the prequel universe, Bounty Hunter capitalizes on its elements in fun and memorable ways. The end result is a solid action game that transports us to a galaxy far, far away, and pays good credits for bringing targets back alive. Now strap on that helmet and jetpack, and find them.

Have a suggestion for a Good Old Game to review? Let me know via private message or Twitter!