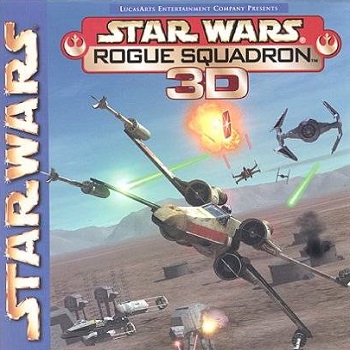 I’m chasing down a TIE Fighter over the skyscrapers of Corellia. Nestled in valleys, with blue-green mountains on all sides, I’m desperately dodging the skyline trying to nail this last Imperial bogey. I try to lead my target, my red blaster cannon shots falling short of the fighter as I lean into a turn. I’m twisting and tilting, on the screen and in my seat, as if mirroring my Speeder with my body will help me at all. I finally land a hit and the TIE Fighter spins out and explodes over Corellia, but I’m too close to the nearest building. I crash, my Speeder explodes, and Luke Skywalker‘s all too familiar anguished death scream echoes out as “Game Over” appears. I was so close! I jump back into the mission again, all the more determined to succeed.

Honestly, it feels strange to be playing as Luke, especially since I spend a lot of my time ignobly smashing him bits against canyon walls or into the legs of an AT-AT. In a game like Star Wars: Rogue Squadron 3D though, you get used to playing levels over and over. As the Rebellion’s premier fighter squadron, you’re sent on only the most doomed of missions. Ambushes, assaults, extraction targets that are so hot the Empire is willing to firebomb entire cities; wherever you’re headed, you can be certain that heavy resistance will be geared up and waiting for you.

An action flight simulator, Star Wars: Rogue Squadron 3D, presents you with a series of missions to fly, each of which must first be played with one specific ship model (X-Wing, A-Wing, land speeder, etc.) before you can play it with another model or progress to the next stage. You’re rated on your accuracy, mission completion time, and the number of enemies killed, and you’re awarded with bronze, silver, or gold medals depending on your success. Those medals allow you to unlock three bonus levels: Beggar’s Canyon, the iconic Death Star Trench Run, and the Battle of Hoth.

The missions aren’t on rails, but all of them having you flying and dogfighting on planets, so your movements are limited by the terrain. A surprising number of Imperial bases are located in canyons. Throughout the missions, after you’ve completed a given objective (which are sometimes very vague) a short cut scene will play, advancing the plot and briefly taking control away from you. These can, honestly, bye a bit jarring at times. There were multiple occasions in my playthrough, for instance, where I’d be trying to pull out of a risky strafing run only to suddenly find myself watching a cutscene that would break my concentration and pull me out of the moment. Fortunately, the game resets your fighter following these little cut scenes, keeping you safe, but I’d still say it took away from the experience for me at times.

You can fly either with the keyboard, a mouse, or with a joystick. It’s also easy to map the joystick buttons to a controller as well, which is how I played the game. It worked well, but I got the impression that a traditional joystick would probably be the best way to experience this game. The dogfights feel fun and dangerous, with each of the available ships having their own distinct personality. Trying to chase down TIE Interceptors in a Y-wing, for instance, feels like chasing a hornet in a plodding, fat bumblebee, while the X-wing flies like a nimble mosquito in comparison. I found the greatest challenge to flying was the game’s inscrutable view adjustments. The camera sometimes has a mind of its own, automatically zooming in and out and forcing me to constantly keep one finger over the manual view reset buttons. Sometimes, to force the view back into an appropriate zoom level, I would have to switch to a different view entirely just to swap back to my preferred 3rd person view.

The music and sound effects are all solidly Star Wars. They aren’t perfect. The audio sometime struck me as being tinny sounding, but it’s clear that the developers put an effort into making the game sound authentic. They even managed to sneak in the distinctive swish of a lightsaber turning on, by using it whenever you select a button from the main menu.

The graphics are dated, but that’s to be expected in a game that originally came out in 1998. Even making allowances for age however, there were some things I took issue with. I can get past the one-dimensional pilots and flimsy looking S-foils, but when the textures fail to load and the TIE I’m chasing looks like little more than a grey rectangle the graphics turn from nostalgically quaint to irritatingly jarring. I also experienced a recurring visual bug on the main menu that put the screen completely black, with buttons appearing only as I hovered over them with my mouse, and other players have reported a similar bug. It wasn’t game breaking, but it doesn’t inspire confidence.

If you can overlook those occasional visual bugs and clunky camera however, Star Wars: Rogue Squadron 3D is a great flight shooter lovingly wrapped in the Star Wars mythos. It’s easy enough to succeed at the missions, but striving to get unlock new fighters and earn silver and gold medals, to improve your accuracy and speed, leaves a challenging game with lots of replayability. It’s now available from GOG for $5.99. If you’re looking for a reason to dust off a joystick, Star Wars: Rogue Squadron 3D is a fun way to get back in the cockpit.