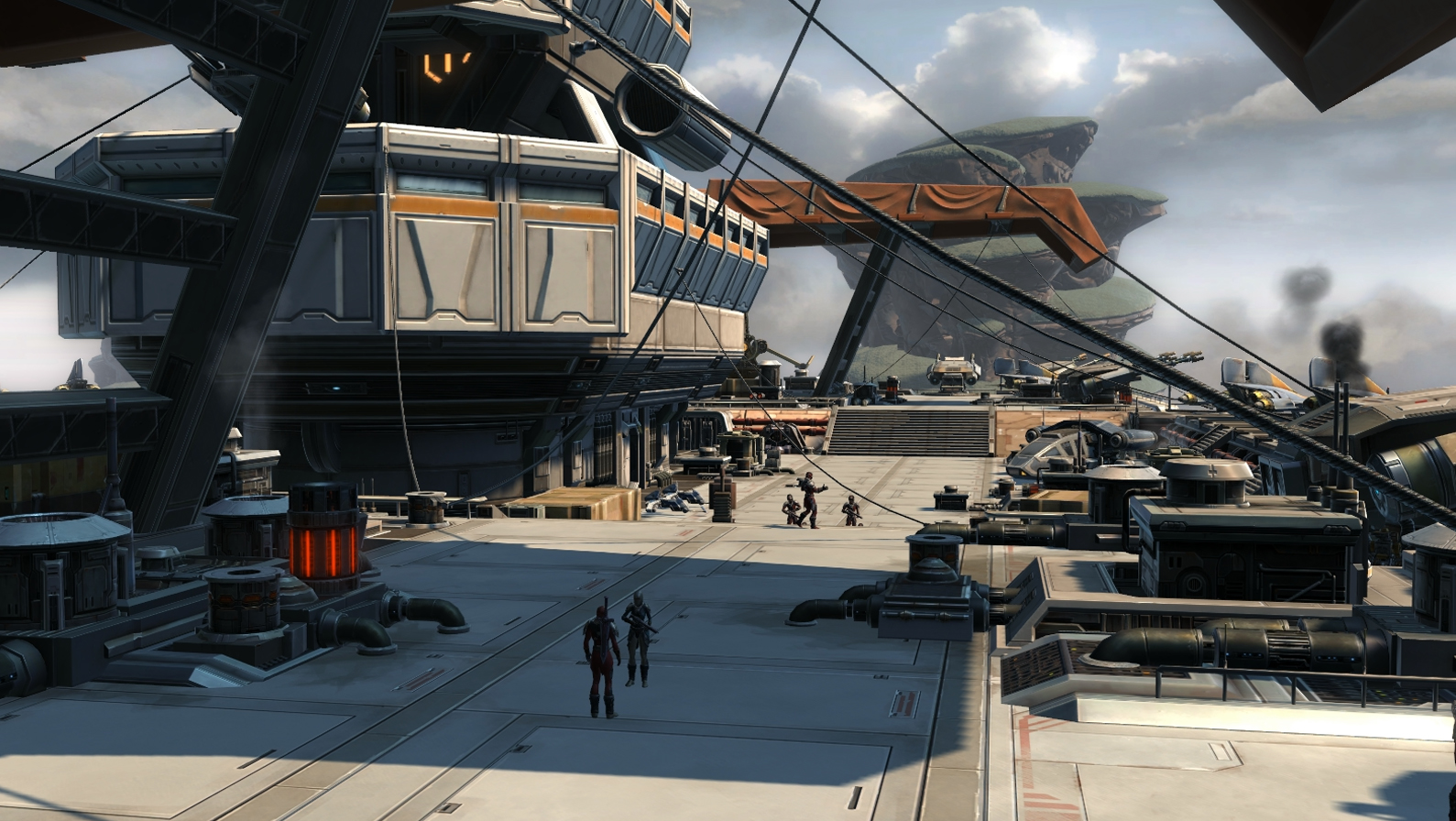 It’s been a bit over a year since Star Wars: The Old Republic first launched. Praised for its efforts to make story matter in an MMO, the game initially surged to great success as “the fastest-growing MMO ever”, accumulating 1.7 million subscribers in the first few weeks. The game made impressive use of voice acting, quests and character choices to help craft an experience that melded the genres of MMOs with more traditional story based RPGs. A major decision during a story quest wasn’t just a decision between new blasters, but one that might ask you to truly examine how your character might respond. And the best ones would leave you wondering if you even made the right decision at all. One moment about ½ way through my Imperial Agent’s story left me honestly befuddled for what the right answer was for both me and my loyal agent.

However, as players churned through the available content in the year after the game’s release, the subscription numbers started to dwindle. While I personally enjoyed my time with the game, I’m not much of one for rolling alt characters, so once interests dried up with the agent’s story I was left wanting. During our preview, BioWare was very frank with what they felt the issues were, citing that the cadence of their updates were too far apart and they weren’t focusing enough on the social and multiplayer aspects that the players were most requesting. The studio has since adopted a new policy to establish an eight week minimum between updates and is taking numerous steps to interact with their community more. Also during this time the game was converted to a free-to-play model, we were told that the decision was made by the whole studio together, not just the leadership. Since the change away from the subscription model, 4.5 million new characters have been created as have 2 million new accounts.

It’s into this environment that BioWare will be releasing their first expansion for Star Wars: The Old Republic, Rise of the Hutt Cartel. The new content allows players to increase their level from 50 to 55, explore the new world of Makeb and embark on a new story-line. In addition, players can delve into a new max level operation, gain new abilities, craft/loot new weapons and items and embark on some galaxy spanning quests. It’s pretty much everything you’d want out of an expansion to a game you’ve been dedicatedly playing or enough new tidbits to perhaps entice former players back, and the folks at the studio were excited to be showing the new content off.

Rise of the Hutt Cartel‘s story is unsurprisingly centered on the Hutts, so if you didn’t get enough of sticking it to those big bulbous slugs in the original story-line now’s your chance. Picking up shortly after the storylines from the original game have concluded, the Galactic Republic has scored a few key decisive victories, whereas the heroes of the Sith Empire have risen to positions of great power or gotten in a few shots of their own. As the two sides continue to grind up their forces against one another, the Hutt Cartel are attempting to use this opportunity to wipe out both sides and place themselves firmly in control of the galaxy. An introduction of another major player in the galatic politics has some interesting implications for the factions expanding beyond just good and evil, which I think would be a great direction to pursue. The focal point for this new conflict and story is the planet Makeb. 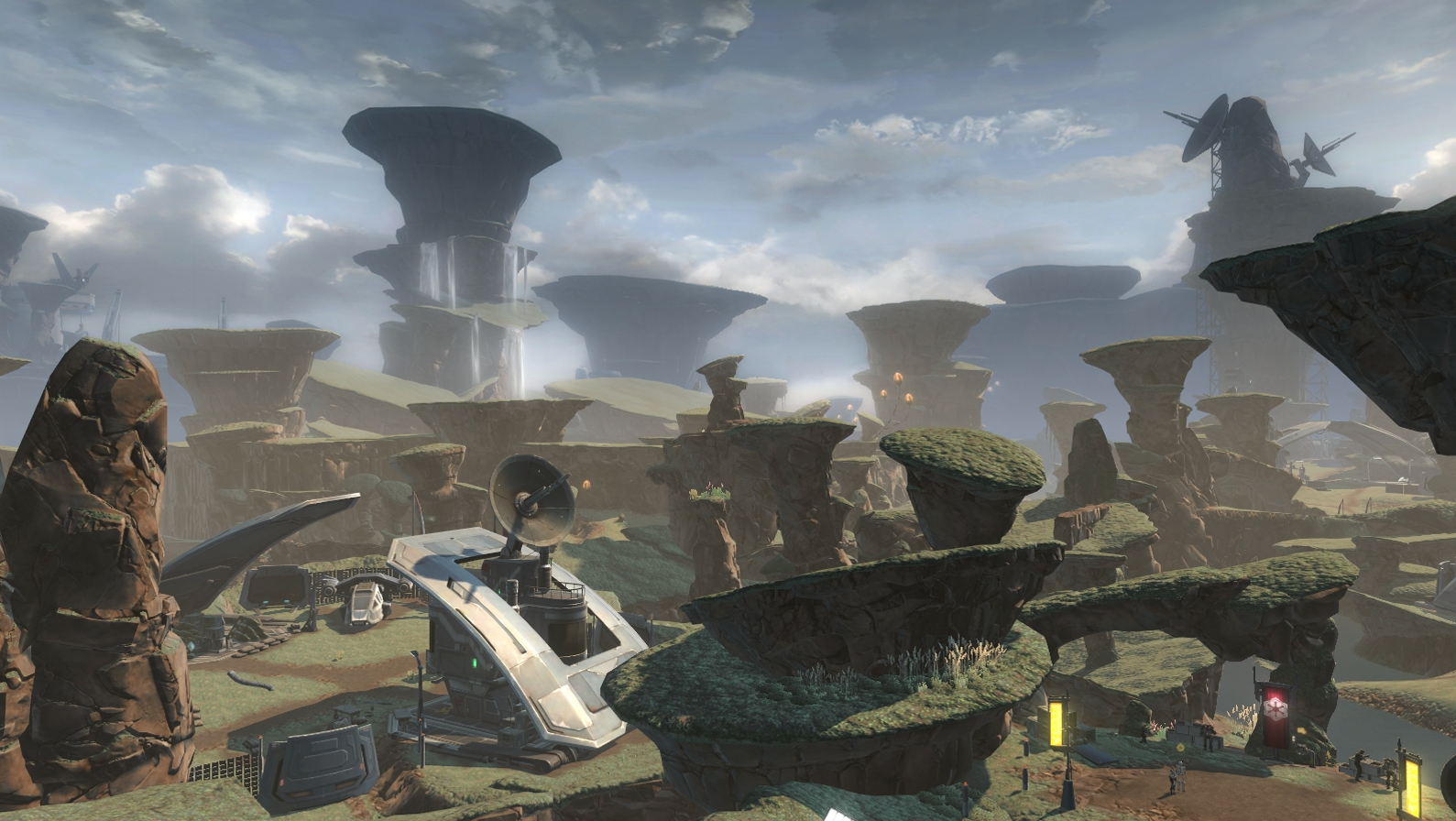 The Hutts have seized control of Makeb with a massive mercenary force in order to mine a highly coveted and powerful new resource that could tip the balance of power. With the bulk of their forces still engaged in combat, and a heavily armed blockade surrounding the world, the two respective factions have sent their best soldiers, agents, heroes, diplomats and scoundrels to either make right or exploit the situation. Those hoping to see how the trooper might solve the problem with heavy firepower while the imperial agent uses subterfuge might be a bit disappointed to find that each side engages in the story-line from just their factions perspective and not individual class missions, but the Makeb main quest has a noticeable level of depth and polish too it. There are numerous decisions to be made that will affect the lives of those involved, like being able to double-cross other folks you’ve been manipulating to further your own goals on the planet Once again playing an Imperial Agent, I found there to even more player agency than before that allowed me to dial in closer to a character that wasn’t evil per se, but was willing to do whatever it took to ensure the security of the Empire, something I found lacking in the original quests.

One new feature that’s sure to garner some attention is the addition of some same-sex romancing, a feature some fans have long been asking for. While I didn’t encounter any indication that you’d be able to form more lasting relationships with say your companion characters, the game does allow you to flirt with and share a moment with one of the NPCs central to the Makeb storyline. I didn’t have enough time to see how that relationship further progressed, little flings and affairs having already been present in the game, but it is worth noting that the whole of it is brought up in a very matter of fact manner. The flirt dialogue options are plainly labeled as they have always been.

Makeb is even an interesting place in and of itself, with an improbable but impressive geography you’d only find in the Star Wars universe. Where planets like Tatooine and Hoth might be memorable for their broad and vast expanses of sand and ice, Makeb draws the eyes vertically instead of horizontally. Everything on the planet seemingly balances precariously on narrow mesas that tower up from below, and gravity hooks add further impressive verticality to the skyline. Makeb’s atmosphere interferes with the systems of normal spacefaring vessels, so these space elevators are needed to move people and goods on and off world. Though be forewarned, with all this elevation, you’re bound to fall to your death at least once, or grumble at the fact that a shuttle that’s just out of reach is separated from you by a nearly bottomless ravine. I kind of wanted to yell out across the 20 meters or so and tell them to just send the shuttle slightly to the left to pick me up. Despite its nature though, Makeb is a surprisingly large zone if you were to stitch it all into one piece, and the whole planet flows together better than previous worlds as you move from one area to another during your attempts to foil the Hutt Cartel. In addition to the events on Makeb, new daily missions and quest chains are being added to the universe with a specific emphasis on exploring not just the highest level worlds, but the whole galaxy. There’s something subtly satisfying about returning to a previous low power zone and teaching the local rabble that you’re no longer to be trifled with as you pursue these new objectives, though not every opponent is going to be a push-over as some sections will change or spawn higher level enemies accordingly.

While purchasing the expansion is required to unlock the new world, abilities and increased character level, there are some improvements for those who opt not to buy it. To accommodate and balance the increased amount of skill points and new abilities, the talents trees have received updates, and all characters can enjoy new legacy achievements and other changes coming in the game update 2.0 dubbed Scum and Villainy which will coincide with the release of Rise of the Hutt Cartel. Whether you’ve been fervently playing since launch or got involved as the game switched to free-to-play, Rise of the Hutt Cartel represents hours if not days of new content to explore and might even spark some renewed interest for those not actively playing any more, I certainly had the thought more than once of dusting off my agent. The digital expansion will launch on April 14th.