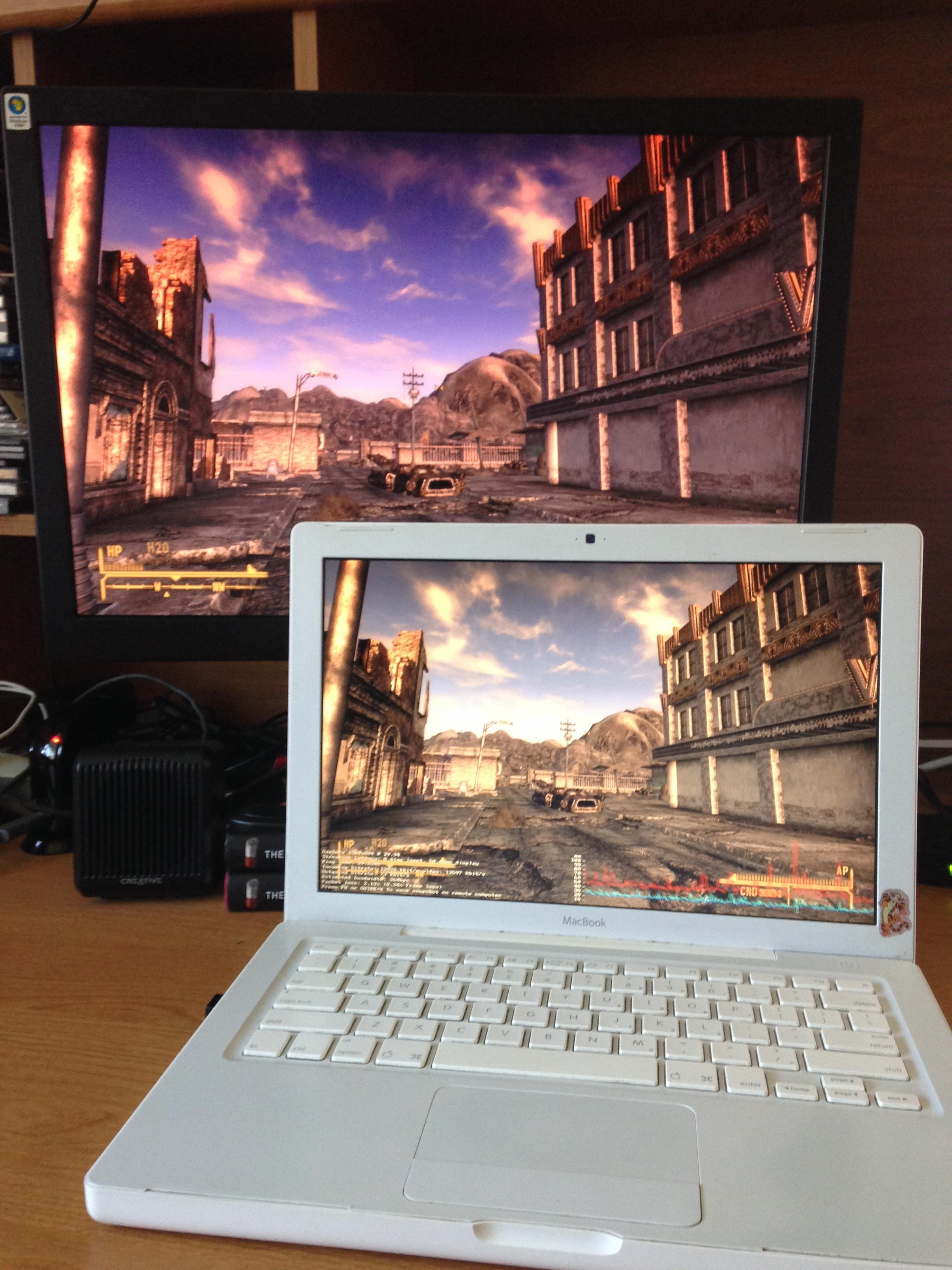 For all of my life, I’ve been a card-carrying member of the PC master race. I have my father to thank for that, who decided early on that it was better to invest in a computer that could do everything, rather than a game console. The advent of the internet has proved his point. Even so, I’ll admit to really enjoying the comfort of leaning back on the couch with a controller. Gaming is a spectrum, after all. So, when Steam launched Big Picture mode a while back, I’d often drag my PC rig into the living room and pretend to be a console owner for a weekend. Now, Steam’s In-Home Streaming promises to do the same thing, but without all the hassle. I played around with the public beta for a while, and here’s what you can expect.

First, my setup. My desktop is of moderate means. It’s equipped with a 3.6GHz quad-core AMD processor, 8GB RAM, and a Nvidia GeForce GTS 450 graphics card. The machine I’m streaming to is my old white Macbook from 2007, a relic of my college years. While my desktop is wired to the router, the Macbook’s on wifi. It’s not the most ideal setup, but I think it’s a typical one.

In-Home Streaming is dead simple to get working. All you have to do is log in to your Steam account on both computers. Once both machines see each other, all the games installed on one machine appear on the other, with the play button replaced with one that says “stream”. You still have the option to play a locally-installed copy if you wish.

Once launched, the game runs simultaneously on both computers. The host machine does all the heavy lifting. Video is streamed to the remote machine, while the controls are streamed back. If that sounds like an involved process where many things can go wrong, you’re right. Thankfully, there’s a helpful indicator that pops up on the bottom-left corner of the screen, notifying you of issues. It specifically tells you if the slowdown you’re experiencing is due to slow capture, slow decoding, or a network issue.

Steam did an impressive job working with my ancient laptop. The old Intel chip, coupled with the highly outdated integrated graphics, can run very few games today. Heck, it often has trouble with YouTube. And yet, it streamed high-resolution video through Steam like a champ, with only the occasional “slow decoding” warning. 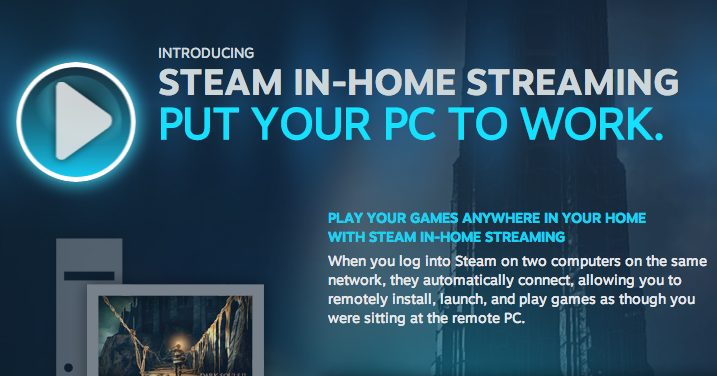 Compare this with Nvidia’s Shield, which does a similar kind of streaming. The Shield is equipped with a powerful mobile graphics chip and only streams if your PC is equipped with a specific high-end graphics card (from Nvidia, naturally). Somehow, Steam manages to do the same thing, but using the old hardware you might have in your closet.

As you can imagine, the streaming is pretty sensitive to network traffic. Watching a video, downloading a podcast, or firing up Skype brought the streaming to its knees. Even normal web browsing could cause the occasional hiccup. However, if the network was clear, I could easily stream, with one computer on WiFi, without so much as a slow network warning.

The majority of games ran perfectly well, with only a slight lag in the controls. The experience was actually similar to the Ouya’s infamous controller lag, only more consistent. Once my brain adapted to the lag, most games were completely playable. I enjoyed many hours with Fallout: New Vegas and Saint’s Row. Games that required more dead-on precision, mostly racing titles, quickly snowballed into total train wrecks. For some reason, XCOM, in all its turn-based glory, was jerky enough to be almost unplayable.

While it generally streamed well, there were some issues. It didn’t seem to recognize the resolution of my external display, and every game seemed stuck in a letterbox format, regardless of what resolution I chose. Also, some games treated the virtual controller as a separate device entirely and didn’t configure the controls right. Sadly, this affected great couch-ready titles like Euro Truck Simulator 2 and Retro City Rampage. That, and the occasional crash to the desktop were reminders that In-Home Streaming is still a beta product.

Aside from a change of scenery, this feature seems perfect for couch co-op. Lets face it, no one wants to crowd around a desk to play one of the many Lego games, no matter how much fun they are. With a spare laptop and a few controllers, you can quickly unshackle your PC library from the office and get those titles in the living room.

Keep in mind that the streaming works with any program listed in Steam. That includes any non-Steam games and applications you add to your list, meaning you can even stream Photoshop to a tiny netbook if you wanted too. It really opens up some cool possibilities.

Surprised as I was by how well Steam’s In-Home Streaming worked, I spend every day using it. While I’m sure that many of my hitches were due to my antiquated setup, many more are likely just a product of the streaming itself. Even so, the next time I want to smash up a bunch of Lego orcs with a friend, I’ll have a solution that doesn’t involve relocating my PC. That, and I can’t wait until the mythical Steam controller makes Civilization V playable on my couch.