Stories: The Path of Destinies from Spearhead Games is more or less an interactive choose-your-own-adventure audiobook, and it has some stories to tell you.

If you appreciate a story-focused game, Spearhead Games’ Stories: The Path of Destinies is worth a look. It’s not strictly a story-telling game, though, and the core of the gameplay is 100% action, but the heavy focus on the story elements, and the unique approach to telling this story, makes it stand out. Spearhead co-founder, Atul Mehra, walked me through the demo at PAX, and offered some fascinating insight into the game’s design. The limited demo on the show floor, for example, apparently had more than 20 available endings, though he mentioned that there was a trend among con-goers to choose the evilest path through the story. I accidentally furthered this trend myself, since the path of evil so often lines up with the path of awesome power, which I’m particularly fond of in games.

While you take on the role of the protagonist, the fact is that you won’t know immediately whether you’re on the righteous path of a hero, or the morally questionable path of a villain, and if you catch yourself soon enough, you can right your ways and push towards the hero’s ending. The protagonist has somehow become embroiled in a rebellion against the established authority of the land, which is a dangerous business. You’ll advance the story through a web of interconnected chapters, where you’re making decisions such as whether to seek out an ancient weapon of legendary power to further the rebellion, or find and rescue your missing companions. Completing a chapter opens up the next section, where you’ll again choose from a couple of options, which continues to develop your character within the story world.

It started with three chapter options, and gradually dwindled to a single option as your path converged with one of the available endings. There’s an odd parallel between this approach to storytelling and, of all things, quantum computing. Collapsing a large number of narrative arcs into a smaller and smaller set of options as you make decisions in the story isn’t an entirely new concept, but the execution here caught my attention. 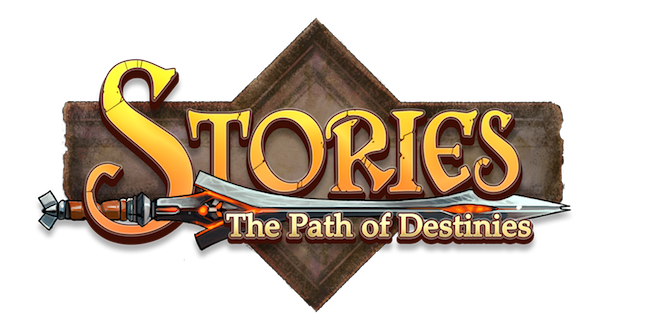 When you enter the story book for each chapter, you’re thrown into an ARPG environment, where you’ll navigate the world, solve environmental puzzles, and fight off waves of enemies in a surprisingly simple, but effective combat system. Combat is clearly not the main focus of Stories, but it’s still a highly engaging experience. The base combat system is just one button, which serves as your attack, lets you grab enemies and objects, and allows you to parry and counterattack an enemy if timed well. As you progress through the story, you’ll pick up equipment that can add new combat options, as well as your normal skills like dash, and even a selection of magic spells. Access to skills isn’t based on character level, like you’re accustomed to from many ARPGs, but a progression system based on story advancement, where you’ll get some number of skill points to allocate in your skill tree for completing chapters.

There were only two enemy types in the demo, and there will apparently only be five or so in the final game, but the mix-and-match of different enemy types will still be able to offer challenging encounters. Even just throwing spellcasters into the melee enemy mix was enough to throw me for a loop, though it didn’t take long to adjust my playstyle. The combat design was aiming to keep players moving around, rather than facetanking all the mobs, and it succeeds to some extent, although they’ll need to ensure the other monster types can keep things dynamic enough to avoid simply mastering the one-button combat system and breezing through every encounter. I do expect that the final game will put more of an emphasis on the combat’s combo system by boosting the hit points of higher level enemies. The higher your hit count, the more damage you do. During my demo, I saw the damage boost rise beyond 25%, so a damage sponge enemy type seems likely.

Stories: The Path of Destinies, as the name suggests, wants more than anything to tell a story. It demands multiple replays to piece together the entire narrative, but even just one playthrough should offer enough information and clues to piece together much of what’s going on in the world. At least if you’re paying close enough attention. The combat is surprisingly fun, but isn’t the main focus of the game’s design, instead primarily serving to make the choose-your-own-adventure story a more interactive experience.

Spearhead Games is planning to release Stories: The Path of Destinies in early 2016 as a PS4 exclusive, though they suggested that it might be available across other platforms at a later date.