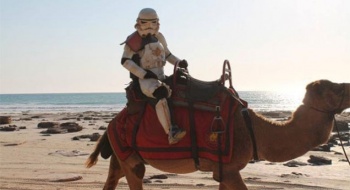 It’s pretty easy to mock Stormtrooper armor for not being able to protect its wearer from… well, anything. It’s supposed to be highly advanced protective gear, but in the original trilogy blaster fire, stone arrows, and thrown rocks are enough to disable Imperial forces. But it seems Stormtrooper armor is a great defense from one of the deadliest hazards in the galaxy – Australian snake bites.

The critical knowledge was learned first-hand by Scott Loxley, who’s walking across Australia in Stormtrooper armor to raise donations for a children’s hospital. During his travels, he encountered what thought was a dead snake. But since this was Australia the snake was (a) very much alive, and (b) a King Brown snake, one of the longest venomous snakes in the world. This species is known to deliver massive amounts of venom in a single bite and is fairly aggressive. King Browns are even known to bite humans who are sleeping as opposed to the usual snake policy of biting in self-defense.

As Loxley approached, the “dead” snake shot up and bit him on the shin. The good news, however, was that while he could feel the teeth on his armor’s plastic, it never broke through to the skin. “So all those people who rag on stormtroopers,” Loxley said, “saying the armor doesn’t do this or doesn’t do that, it stopped a snake bite and probably saved my life.”

I’d say that’s a good sign that Stormtrooper armor has a slight edge in extreme environments, even if it a cosplay recreation. Not that it you should stress test your costumes in the Australian outback.

That said, it’s still no excuse for the whole Ewok rock thing.