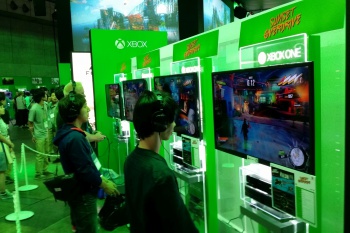 Sunset Overdrive could be the colorful explosion the current “grim and gray” zombie genre needs.

When we last saw the title, Andrea was moving about Sunset City solo, learning about some of the game’s RPG elements. The demo that I got to try out at Tokyo Game Show threw me and seven strangers into what can only be described as a “base defense” scenario. We were given an arsenal of weapons, a brief tutorial on how to “grind” around the map like some kind of hyper-violent Tony Hawk (sans skateboard), and told to shoot zombies (or O.D’d, as they are referred to this time) from destroying special canisters of goo. Or something. The “plot” was pretty thin in this demo.

Anyway, once having a couple of seconds to try and figure out what button did what, waves of O.D’d started running towards us. The game encouraged us to grind, and it’s auto-aim system meant that you never felt like you had to stop and look down the iron sights – you could simply zip around blowing stuff up. The grinding system is really the coolest feature of the game, as I became more proficient with it, I was able to traverse the map with ease, not unlike Titanfall‘s wallrunning.

The weapons were all as crazy and zany as the world and the characters, and included efforts such as a record launcher, and a gun that shot exploding teddy bears, but unlike my experience with The Order: 1886, where I had too few weapons, in Sunset Overdrive I had too many. This normally wouldn’t be a problem, but switching between them felt really awkward, and it was hard for me to get a handle on so many weapons so quickly.

What I was a little disappointed to discover was the demo’s lack of traps, considering how Insomniac had hyped them in the past. We were only able to place a single trap each, and the trap I happened to have was the run-of-the-mill spinning blade trap. I like that the demo forced us to use teamwork, but I was really hoping to be able to lay my own complex labyrinth of traps.

So Sunset Overdrive was fun and colorful… but also somewhat confusing. While the Left 4 Dead onslaught is something we’re all used to, the game’s unique spin on it means it certainly takes some getting used to. At the moment it still feels a big messy in places, but if Insomniac can tidy it up, it may become the Xbox One’s best exclusive.