NOTE: The following article contains allusions to certain “spoiler” story-elements of the film “Man of Steel.”

Upfront confession: I don’t really want to write another column about “Man of Steel.”

I reviewed the film. I mused on its big-spoilers and future potential. I’ve blogged about it. I’ve gotten into pages and pages of Twitter discussions about it. For the record: I still think it’s a solid but profoundly-problematic film, but I like it less and less the more I think about it. At this point, what I’d like to do more than anything as far as “Man of Steel” goes is just let it slip into the background of my mind for awhile, maybe see it one more time (for a total of three) before it leaves theaters sometime in late Summer and ultimately form a fuller opinion of it divorced from the sturm und drang of both “The Rebirth of Superman!” and “The Potential Birth of The DC Cinematic Universe!”

But, damn my luck, this movie I’d like to put out of my head for awhile (for both our benefits) is doing something that I honestly wasn’t expecting… and which also happens to be something I chide most Summer blockbusters for failing to do: It’s starting a discussion. Several, in fact. Not insubstantial ones, either. “Man of Steel” may not be the deepest, most richly-nuanced of Summer action flicks (in fact, I’d contend that it’s notably shallow despite its bombastic pretense otherwise), but it’s inspired a surprisingly intense and weighty discussion among critics, “fanboys,” and audiences in general about tone, content and presence of violence in film that has somehow managed to transcend the usual tiresome pitfalls of “This film will inspire REAL violence!” versus “Don’t censor me!” All of it surrounding one central question:

Is this movie too dark to be “Superman”?

The reason why you will never, ever make the Superman movie that satisfies everyone is encoded into the character’s very DNA. In fact, it’s right there in the name: Superman. Super Man. The Superior Man. He doesn’t have a specific “theme” to his superheroism like the myriad crimefighters who followed him – like the way Batman incorporates bats into every aesthetic facet of his persona, or how Green Arrow self-consciously riffs on Robin Hood iconography, or how Captain America… is, well, Captain America – his theme is simply his superiority. He’s “man,” only super. He’s you, but better.

You can jump? Superman can fly. You can lift a box? Superman can lift The Moon. You can see? Superman can see through walls. Oh, and he’s also more super as a person than you or anyone else can hope to be. After all, he’s a guy with the abilities to conquer and enslave the entire planet a dozen times over without breaking a sweat who instead not only devotes himself only to helping the rest of us but doing so largely in deference to our own laws and customs – who else but the best human being imaginable would do that? And if he does that right, then it only stands to reason that he’ll do everything else right, too.

And that’s where everyone tends to get hung-up: Outside the basic fundamentals, we’ve all got a different conception of what “doing everything right” would/should mean. To one person, the conventional conception of Superman as benevolently flying about rescuing kittens from trees, talking down suicidal jumpers and tut-tutting the occasional mugger between word-games with Mr. Myxsptlk and slugfests with Metallo is the essence of righteous behavior. To another person, anything short of using his abilities to take over global operations and institute Utopia on Earth is a kind of selfish waste.

“Man of Steel,” on the other hand, isn’t especially interested in either of those visions of one of the most iconic fictional figures in human history, nor in entertaining any other questions of what he can or should be doing outside of two conjoined observations: Superman can easily endure the most brutal beatdown action-specialist Zack Snyder, dour-bombast-enthusiast Christopher Nolan, Christopher Nolan’s personal Human Wikipedia for DC Comics references (aka screenwriter David Goyer) and a huge pile of Warner Bros’ money can dream up… and then he can punch whoever meted it out very, very hard.

And that’s more or less exactly what Superman does for what feels like the entire second half of “Man of Steel.” There’s no shortage of dissonance caused by this, even when confined strictly to the film itself. The first hour or so goes to great lengths to carefully lay out a set of thematic and philosophical underpinnings for the film (and franchise?) to come: Eugenics, conspicuous-consumption of natural resources, stagnation of societal evolution, militarized-revolution begetting fascism and abandonment of outward-looking intellectual curiosity are among the seemingly-heavy new wrinkles baked into the re-imagined backstory of the doomed Planet Krypton and its survivors Kal-El and General Zod.

What’s more, we witness Clark growing up absorbing even more Big Idea philosophizing from his adopted father. Paradoxically, Kevin Costner’s Jonathan Kent instills an almost socially-crippling humility in his alien stepchild by saddling him with a profound sense of his own supremacy: The would-be Superman must wait – even at the expense of saving his loved-ones from harm he could easily thwart – for the correct moment to reveal himself to the world. Not just for the purpose of drawing out the narrative to quasi-epic length, but because the mere facts of his existence are monumental enough to turn the entire world’s understanding of itself upside-down.

Soon enough, he also has the computer-virus/hologram/ghost of his biological father telling him that something akin to Motivational Coach Godhood is his intended destiny. Make no mistake, for about an hour it seems like “Man of Steel” is setting itself up as just about the weightiest meditation on its title character since Alan Moore symbolically sent him packing… 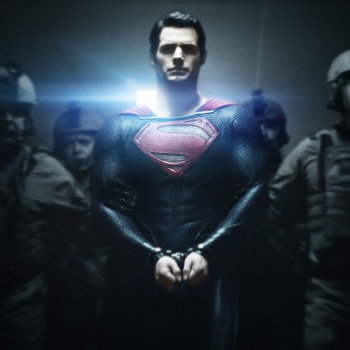 …and then the fight bell rings, and basically none of it goes anywhere or informs anything that comes after, save for justifying the existence of some mechanized obstacles and the Eugenics/”bred-for-the-job” angle acting as background for Zod’s single-minded relentlessness – transforming a huge chunk of earlier exposition into the most convoluted way of saying “because he’s just BAD, okay?” ever. It really is just about that jarring: You can almost picture the buzzer going off, the assembled characters standing akwardly mid-sequence, Snyder, Goyer and Nolan striding into frame making the “time out” gesture and declaring: “Okay! Okay, nope, that’s enough of that! Everybody whined when he didn’t punch anything in the last one of these, so this time we’re giving them all the punching! Clark? Zod? Zod’s various pals? Start wailin’ on eachother and don’t stop poundin’ until the audience is completely numb to our endless, just shy of tasteless 9-11 allusions!”

As a result, there’s not a lot of room for levity, or humor, or the kind of heartfelt awe typically associated with the character. Instead it’s a series of fight scenes between beings so indestructible that the damage is almost all collateral. Skyscrapers tumble, whole city blocks are turned to ash, what looks like a big stretch of rural Kansas gets reduced to ruin and – in a development that has sharply divided fans – Superman does precious little rescuing or protecting of anybody amid all the punching and eyeball-lasering.

So yes, it’s all quite dark. And angry. And violent. But is it “too dark” for Superman? I’m not really sure.

It’s definitely the darkest movie (or TV) version of the character and his world to hit movie screens outside of certain infamous moments from “Superman III.” It fits comfortably within the “gritty realism” mold producer Nolan struck for his Batman movies, as well. But it’s not exactly “Watchmen,” either. In many respects it’s a live-action realization of the DC Universe of the 1990s – right down to Jor-El suiting up in bulky powered-armor and swinging around a Liefeldian laser-rifle – with its damaged, angst-ridden heroes and focus on the violence wrought with superhuman powers over the miraculous acts or last-minute rescues.

On the other hand, it’s still a relatively bloodless and morally-uncomplicated affair. For all his pouting, Superman’s central background is still “good parenting = good superhero.” Zod and company are bad because they were (literally) born that way – and quite happy to monologue your ear off about it. It’s impossible not to conclude that hundreds of thousands of people were killed amid the chaos of Goku and Vegeta Superman and Zod throwing eachother around Metropolis, but we don’t actually see anybody buy the farm onscreen. “Man of Steel” is thematically grim and implicitly violent, but I’m not convinced that “too dark” is the overriding issue.

Rather, what I’d offer from this less than ideal vantage point is that the lack of “lightness” is far less problematic for the film than the lack of a recognizable Superman, which I think is what a lot of the criticism is reading as “darkness.” The stated purpose of this movie was to try and strip out some of the baggage the character had accumulated and find something that might be a better fit for modern audiences, but in doing so one runs the risk of also throwing out something than turns out to be essential. That might be what’s happened here.

“Dark” or not, the film is chiefly lacking the sunny disposition and (there’s really no other way to say it) child-friendliness that the popular culture has previously always associated with the character. And while the idea of a Superman movie aimed largely at older teenage boys is certainly novel and obviously successful at the current boxoffice, I can’t help but wonder what it means in the long term… especially given the film’s unexpected (but by no means prohibitive) tumble to third-place in its second week of release – behind the abysmal “World War Z,” no less.

What I can say for certain is that I’m glad this particular discussion is happening, even as it eclipses the more immediate questions of whether or not the movie is any good. Hollywood’s current fixation on strip-mining geek culture – so much of which is grounded in things that adult fans first encountered as children – for its blockbusters means that the “darkening” of things that may not actually benefit from being darkened is going to be a continuing practice. The discussion about whether or not that’s really an appropriate or healthy cultural development is important to have.