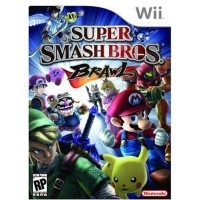 Super Smash Bros. Brawl has become the fastest-selling game in the history of Nintendo of America, selling at a rate of more than 120 units per minute since its launch.

The game sold over 874,000 units on its March 9 launch date in the United States alone, and racked up a total of more than 1.4 million units sold in its first week of release. Joining classic Nintendo characters like Mario and Pikachu with other industry favorites including Sonic the Hedgehog and Solid Snake, Super Smash Bros. Brawl offers nearly limitless variety in its all-out four-way fights. The previous game in the franchise, Super Smash Bros. Melee, sold over seven million copies and became the most popular Nintendo GameCube title of all time.

“Super Smash Bros. Brawl has made the leap from videogame to cultural phenomenon,” said Cammie Dunaway, executive vice president of sales and marketing at Nintendo of America. “Game reviewers and the public alike praise its fun gameplay and extensive, inventive content.”

The success of Super Smash Bros. Brawl will likely mean another chart-topping month for Nintendo in March, following on its successes in February which saw the company dominate NPD sales figures in hardware, software and accessories.