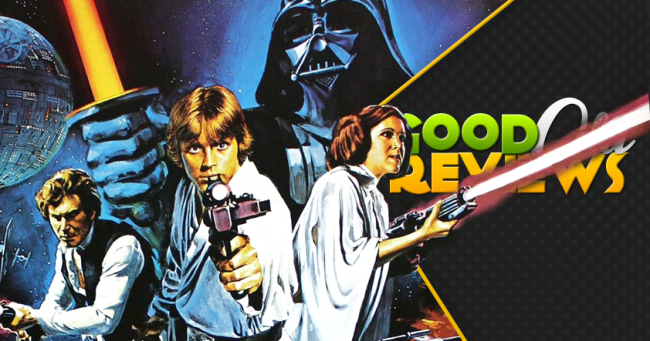 A long time ago, on a console far far away, there was a game called Super Star Wars. Before Battlefront, Knights of the Old Republic, or even Shadows of the Empire, this game captivated fans with its side-scrolling levels, run-and-gun gameplay, and impressive 16-bit lightsabers. It was arguably the best movie-to-video game adaptation until Goldeneye 007 arrived five years later, and I have many fond memories of playing its levels on the humble SNES.

So you can imagine my excitement when Sony revealed it would re-release Super Star Wars for the PlayStation 4 and Vita. But I’d forgotten one thing: Super Star Wars was an SNES-era platformer, which means it’s harder than watching Attack of the Clones sober. You’d have a better chance to getting a million to one shot on a small exhaust port than beating this game on the first try. Or dozens of tries. (Apparently all my fond memories were based on cheat codes scoured from Nintendo Power magazines.)

Thankfully, Sony’s re-release lets you optionally save the game where you’d like, instead of relying on limited lives and the built-in checkpoint system. This means Super Star Wars is… well, it’s still crazy difficult. But the chances of newcomers reaching and destroying the Death Star are vastly improved, and it lets you enjoy the fantastic touches Lucasarts included along the way.

Super Star Wars follows a condensed version of the original Star Wars movie plot. R2-D2 and C-3P0 escape to Tatooine, Luke Skywalker finds them, Han Solo and Chewbacca help everyone escape the planet, and so on until the Death Star explodes. We all know the story. The thing is, Super Star Wars is also a 90s era action-platformer, which means it’s somehow more action-packed than the films. Your first mission involves Luke shooting his way through all of Tatooine’s wildlife on the way to killing a Sarlaac. A freaking Sarlaac. And it only gets more intense from there.

Eventually, Luke learns R2-D2 was abducted by Jawas. Does he buy the droid back like a reasonable moisture farmer? Sith, please: Luke drives into the desert and kills 12 Jawas. Then he leads a one-man assault on the Sandcrawler, destroying its vast array of weaponry and everyone inside. (Now you know who really killed those Jawas in A New Hope.) Then Luke leaves to find Obi-Wan, murdering more Sandpeople along the way than his father ever did. Then they reach Mos Eisley and massacre a garrison of Stormtroopers before entering the Cantina. Once inside, practically every mercenary jumps up from their tables to attack you, making it a more violent place than anything we saw in the movie. I’m surprised Luke didn’t just blow the Death Star up from the inside-out while rescuing Princess Leia.

This may sound like Super Star Wars‘ protagonists are unstoppable warriors, that’s not entirely accurate – these heroes are far more fragile than it seems. You’ll die a lot before anyone holds a Death Star Destruction Ceremony in your honor. Seconds after the game begins, you’re dodging Tatooine scorpions who fling themselves in your direction. Jawas, Sandpeople, or Stormtroopers can swarm you at any moment. Large robotic traps fill the Sandcrawler and Mos Eisley hangar. And to make it worse, just about every enemy respawns the moment their spawn point is off-screen. So if you backtrack through an area you cleared – or fall from a platforming section and need to climb back up – you’ll probably have to fight the same enemies over again. 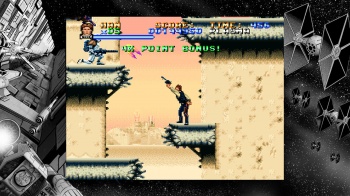 The good news is most enemies drop hearts, so it’s pretty easy to refresh yourself as you progress. And since they usually respawn, you can walk back and forth over sections where it’s easy to kill them and collect health – which I did before a few boss battles. You can also upgrade your blaster with higher damage ratings or enemy-seeking missiles, vastly improving your odds in combat. But that doesn’t change how stupidly easy it is for anything to tear through your life bar. Some bosses are devastating if you can’t reach a safe space immediately (looking at you, Hover Combat Carrier). And touching the wrong area of the map could prompt an insta-kill (looking at you, bottom floor of the Sandcrawler).

As much as I love retro platformers, this is exactly why most modern games ditched the lives system. Unless you’re playing something like Super Mario Bros with moderate difficulty curves and plentiful extra lives, anything can reset your progress before you can get your bearings. Super Star Wars starts with three lives and three continues, all of which new players will burn through before reaching Level 3 – if not sooner. That’s why I’m so glad Code Mystics included a save function for the PS4/Vita conversion. Yes, it encourages save scumming, but it’s the only way some players can experience a full game. Plus it’s optional, if you’d prefer to be a purist about it. As a cheat code abuser, I probably can’t judge, but I still had fun this way.

While I’m mentioning save files, the PS4/Vita cross-save system is great too. As long as you’re online, everything is automatically transferred to the other system without any extra action on your part. It’s not a retro feature on Lucasarts’ part, but it’s really nice to continue from a handheld system and back again with a minimum of fuss. 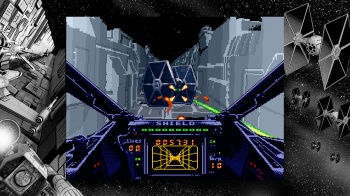 But even if you’re the worst save scummer from a hive of villany, Super Star Wars will prove challenging. Many gameplay scenarios are rarely encountered again, like laser barriers which are only appear in the Sandcrawler, or rising platforms from the Death Star Tractor Beam room. It’s hard to prepare for something if it only appears once or twice between large-scale shootouts. The worst example is the final level, where you pilot an X-Wing through the Death Star trench. It’s dramatic, but introduces vehicle shooting mechanics that never appeared anywhere else in the game.

I’ve been complaining for a few paragraphs, but here’s the thing: Even with these issues, Super Star Wars is a blast to play. Once you’ve finally upgraded your weapons, it’s great fun to rush through Star Wars at breakneck speed, tearing your way through its many enemies. And despite the story changes, each level is impressively faithful to Star Wars‘ spirit. The locations are authentically designed, and there’s even small nods to minor lore – including one boss based on a monster from Chewie’s “chess” game. And of course the musical score goes a long way towards making the game feel like a true Star Wars experience.

Maybe it’s nostalgia, or the charming 16-bit graphics, or maybe I’m just excited about the upcoming Star Wars movie. But I’m really glad Super Star Wars is available for modern systems, and even happier it can be played across multiple sittings. With games like Battlefront setting the bar for modern Star Wars game, it’s important to remember where the gold standard used to be.

And Sony: When you re-release Super Empire Strikes Back and Return of the Jedi? Let’s bring along the cheat codes as well. You haven’t experienced Star Wars until you’ve played as an invincible Ewok with unlimited thermal grenades.

The week after that? You decide! Share your thoughts in the comments!