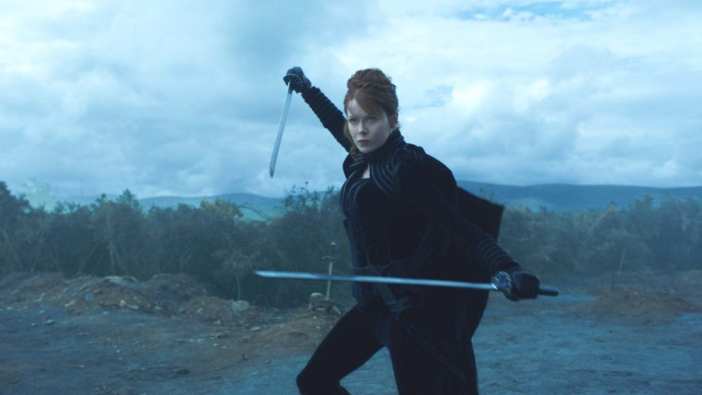 One of my favorite moments in Into the Badlands is only a few seconds long. Our hero Sunny (Daniel Wu) is fighting 30 bad guys or so, as heroes do. About four of them push him down at once, and you see their lower bodies moving in on him from his point of view. They’re all lined up, and he kicks each one in the same place on the leg, one after the other — whack! whack! whack! whack! They all groan and collapse, and Sunny leaps away to beat the snot out of someone else.

The sequence is goofy, cool, and laugh-out-loud funny. It’s also a reminder of how unimaginative and staid most contemporary action fight scenes tend to be, especially in the superhero genre. Action films and television shows should have great action — it’s in the name! But studios, directors and audiences alike often settle for battles which substitute CGI for real wit and imagination.

Into the Badlands, a post-apocalyptic fantasy which has run on AMC for three seasons, is also an extended tribute to Hong Kong film. The stunt team is filled with veterans of Hong Kong cinema, including Wu himself, and there is an entire separate shooting unit devoted to fight sequences.

As a result, the martial arts battles have a crisp fluidity unmatched on American television. They aren’t just beautiful, they’re imaginative. The writers set up witty fighting challenges reminiscent of a Jackie Chan film. In Season 2, for example, Sunny has been captured and had his arms strapped to large wood slats. In a wonderful fight sequence he dodges, dances and parries with his arms immobilized, blocking swords with the wood and leaping in the air to snap his opponents’ necks with his legs. Later Sunny has to fight while cuffed to fellow prisoner Bajie (Nick Frost) and some of his moves involve flipping his companion around like an oversized weapon.

Even when there’s no single gimmick, the fight scenes are filled with clever little twists and “how did they do that?” stunts. In one scene, ruthless war leader/dominatrix/feminist revolutionary The Widow (Emily Beecham) causally runs up a wall backwards. In the very first fight scene of the series, Sunny tosses a random bad guy aside and the man literally falls on his face, his body arcing up bonelessly. This is a casual, blink and you miss it throwaway moment that requires stunning skill by the stunt performer.

In contrast, the big opening fight scene in Avengers: Infinity War between Thanos and the Hulk is a giant visual nonentity. The combatants throw a bunch of punches while the CGI and thundering soundtrack try to make up for the fact that no one has bothered to come up with interesting stunts. The final battle in Spider-Man: Homecoming is somehow even worse. Into the Badlands would have a field day with a fight with a flying opponent, but in Spider-Man the scene is so poorly lit you can barely see it, and there’s no choreography to speak of. Vulture just picks the hero up and drops him. And the less said about the epically clumsy and ponderous Batman v. Superman: Dawn of Justice Superman/Batman fight scene the better.

There are some exceptions. The Daredevil Netflix series specializes in a brutish low-fi fight choreography which is very different from Into the Badlands, but impressive nonetheless. And the wonderful scene in The Avengers where Black Widow gets to fight while tied to a chair is one of the few action sequences in superhero films which recalls Hong Kong cinema, though Into the Badlands would have undoubtedly thrown more than just two antagonists at her.

The fact that there are some good superhero fight scenes makes it even more puzzling why so many are mediocre. Infinity War’s budget was more than $300 million. Surely some of that could have been spent on hiring an amazing stunt team. The superhero genre is built around spectacular fights, so why are directors and showrunners so indifferent to what those fights look like?

Part of the answer is that not all superhero narratives have money to wallow in. Iron Fist, for example, reportedly gave star Finn Jones little time to prepare for stunts because of a rushed production schedule. That’s probably why his fight scenes are so half-assed; he always seems to be looking for a teleprompter mid kick.

It doesn’t help that Jones isn’t a martial arts specialist. Wu began studying martial arts when he was 11 and has been performing intensive fight scene choreography for decades. When he throws a punch, he looks like he knows what he’s doing. In contrast, most of the actors hired to play superheroes are chosen because they’re well known names, or are charismatic and fit the part. They’re generally not taken on because they have experience with stunt work.

That points perhaps to a broader explanation: even though fighting is central to the superhero genre, spectacular stunt work just isn’t a priority for superhero film or television.  The current wave of superhero narratives kicked off with X-Men in 2000 and Iron Man in 2008, both of which were heavy on CGI effects and relatively uninterested in martial arts fight choreography.

That’s carried through to this day. Even with very large budgets, there have to be tradeoffs. Into the Badlands has invested a great deal of time, energy, and money in its stunt work, and it shows. Superhero films have chosen to spend their money instead on marquee actors and visual effects.

Films like Ant-Man and Spider-Man: Into the Spider-Verse have engaging, original visual styles. But there’s no recent superhero property other than Daredevil that has put its heart and soul into inventive and imaginative combat set pieces. The result is that most superhero fights are a lot less super than they could be.