Syndicate brings up a topic worth delving into, and that’s gimmickery. It’s a nice convenient criticism to make against a game that its features are “gimmicky”, but this smacks me as another candidate for the pretentious game critic glossary. What exactly do I mean by a gimmick? Well, according to Wikipedia, the standard marketing definition of a gimmick is a unique feature on a product. Which is good, right? The unique selling point is the driving force of innovation. But! Wikipedia goes on to say that a ‘gimmick’ generally also means a unique selling point of little relevance or use. Like a digital clock built into the side of another, larger clock.

The thing about videogame gimmicks, though, is that they’re not necessarily useless. They can be as functional as you like and still be a gimmick. But what is it that makes an aspect of a game a “gimmick” rather than a well-implemented mechanic? Let’s take a voyage of discovery together.

The gimmicky aspect of Syndicate is the enemy hacking abilities. You press your hack button and without so much as a single quick time event, you successfully hack an enemy to either shoot themselves in the face, shoot their friends in the face, or make their gun shoot itself in whatever its equivalent of a face is. What makes all this feel gimmicky is that it’s functionally the same gameplay as the boring old standard shooting mechanic and with much the same effect. You point at a meanie head, you press a button, and the meanie head is killed or disabled.

The persuade ability is better, but converted enemies don’t do much damage and what’s most disappointing is that they shoot themselves when they’re the last man left standing. I fondly remember that the original, isometric Syndicate had no upper limit on party members, and if you had a Persuadertron you could end up walking around with a massive entourage of civilians, enemy soldiers and kidnapped scientists. But no, videogames must maintain the precious status quo battle to samey bloody battle. I’m sure I’ve complained before that regenerating health basically turns shooters into sequences of completely unconnected shootouts that reset themselves in between each one, but it’s worth complaining about again. GRR.

The other aspect that made the hack powers gimmicky is that they only work on the low-level mooks, not on the boss fights. All you usually do to the bosses is shoot them a whole bunch from half-way behind bits of wall. And since in the past we have learned that boss fights in video games are crash-course final exams in the essential mechanics of the game up to that point, this tells us two things: firstly that the hack powers are pointless gimmicks, and that the core gameplay of Syndicate is shooting things a whole bunch from half-way behind bits of wall. In other words, the usual tedious rubbish.

Another reason why gimmickery is my hot topic is because I’ve been playing a lot of Mass Effect 3 lately in an attempt to blow through to the apparently reviled ending within the four days available, and after writing my review (coming soon) it occurred to me I’d forgotten to mention the big gimmick: the Kinect voice controls. So I’ll mention it here before anyone gets disappointed. 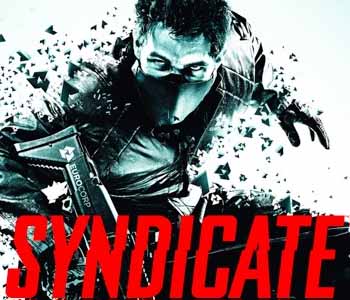 News flash! It’s dumb. I said it would be dumb and it is dumb. I remember when I first heard about the concept my exact words were “no”, “no”, “no”, “no” and “no”, in no particular order. Because it’s the same issue I have with motion controls. Saying out loud the conversation option or the order to move up is slower, less reliable and more effort than pressing the equivalent button. Some might argue as they do with the motion control bullshit that using your voice to issue orders is more “fun” or more “involving” (snnnrrkk), but I find there’s little that hurts immersion more than hearing my reedy half-asleep voice in the middle of a science-fiction laser battle.

What I didn’t anticipate was one amusing incident when my housemate walked in while I was in the middle of a conversation, and as we discussed the on-screen events, the Kinect interpreted something he said as one of the dialog choices. But it was the choice I hadn’t wanted to make. I think it was in a conversation with my girlfriend from the previous game in which I had wanted to make it clear that she should hit the road ‘cos Shepard is a rutting stag that can’t be tied down, sister. But I ended up going the gross kissy-poo path and that put paid to my 100% Renegade ambitions. I also can’t be certain but I think the game managed to interpret its own audio as me making a dialogue choice at one point, which no one can tell me is good design.

So those are the things that are gimmicks, but what things that one might think wear a little bit of the gimmick wallpaper are actually not gimmicks by my sneering, derogatory standards? Well, there’s the gravity gun from Half-Life 2, which is a core mechanic because the entire game is built around showcasing the Source engine’s physics, and the gravity gun is your only weapon in the entire last section of the game. And then there’s the Demon Morph power from Painkiller in which you get a powerful attack after collecting a certain amount of enemy souls. That’s not a gimmick because it’s a very very efficient attack and just more encouragement to kill everything, which is all you fucking do in Painkiller.

So my first pithy memorable definition for a “gimmick” in the negative sense is that a gimmick is a mechanic that allows you to achieve something in a less efficient way than the methods you already have. That covers the Syndicate and Mass Effect examples, but there’s the other kind of gimmick: things like the forced vehicle or turret sections on rails in shooters that exist to present impressive action and graphics but in which you are about as involved as a patron strapped into a roller coaster car. Like the brief space shooter bits in Halo Reach and Killzone 3 that are nothing to do with anything else you do in the game. Not the same as the vehicle sections in Halo 1-3 and Half-Life 2 because in those cases (a) you’re in control of where the vehicle goes and can still shoot in all directions and (b) you can get out of the vehicle whenever you want if you feel an upcoming cliff edge doesn’t look friendly.

So maybe a “gimmick” is “something that interrupts core gameplay without necessarily enhancing it”. But that doesn’t really fit the Syndicate/Mass Effect examples, which don’t interrupt but exist without purpose. We could always broaden the meaning to “game mechanics that trail and dangle off the core gameplay like hangnails with colorful flags on the end” but there’s no reason a word can’t have two definitions. I dunno. Feel free to debate this matter in the comments. I lost interest at “kissy-poo”.