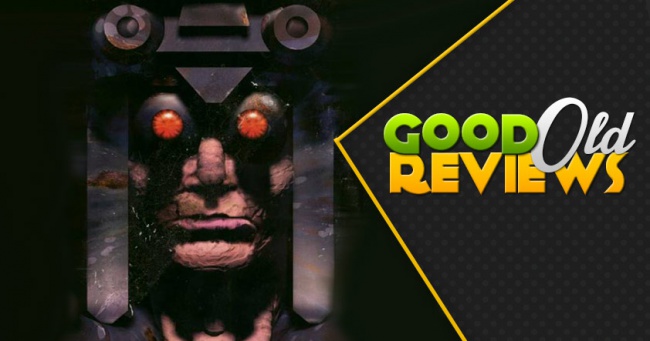 System Shock is a name which makes us think of darkened hallways, inhuman cyborgs, and a little spiritual sequel called BioShock. But in 1994, it played far more like a thinking gamer’s Doom. It had the same pixelated 3D graphics, FPS combat, and a sci-fi setting, but also included a more detailed story and elaborate mechanics. In short, System Shock is the kind of game id Software could have made if it stuck to Tom Hall’s original Doom design documents.

Yet today, we mostly remember System Shock 2 and rarely discuss the original. Sure, this was a deeply immersive game, but it wasn’t flawless. It showcased clunky controls and a frustrating interface. Level layouts were confusing, and its learning curve was through the roof. Couple that with moderate sales and later graphical incompatibilities, and System Shock quickly became a forgotten classic on modern systems.

Here’s the thing – System Shock clearly holds an essential place in gaming history. Even setting aside System Shock 2, the original kicked off an entire genre of story-based action games. Metal Gear Solid, Resident Evil, and even Half-Life made story a key element in subsequent years, while Deus Ex was directly inspired by its mechanics. System Shock has also been included on several “Best Games of All Time” lists, despite being almost unplayable on modern computers for over a decade. That’s why it’s fantastic that System Shock: Enhanced Edition is now available from GOG.com. Night Dive Studios couldn’t improve on everything that made System Shock an awkward experience, but so much greatness still shines through that we can see how compelling it was.

System Shock takes place in the cyberpunk future of 2072. You play a hacker blackmailed into an illegal job – switching off the ethical constraints on SHODAN, Citadel Station’s artificial intelligence. In return, you’ll be rewarded with a military-grade neural interface, which requires surgery and a six-month healing coma to use. After completing the job and taking the surgery, you wake up to learn SHODAN massacred Citadel Station’s staff and developed a cyborg army to invade Earth. You are the last remaining obstacle in SHODAN’s plans, as you explore, shoot, and hack your way across a station of deadly enemies.

When you first start playing, System Shock will appropriately feel like a shock to your system. You’ll get a cold open with only a few text prompts to orient yourself to the environment. A garish interface fills the screen with a confusing number of buttons. Most importantly, the movement controls barely resemble the WASD/mouselook approach we’re familiar with today. Instead, the keyboard controls basic movement, while the mouse interacts with the world. For a few minutes, it felt like System Shock was actually a 3D 90s adventure game, where you click between the game and inventory windows to solve various puzzles.

These awkward controls are the biggest hurdle for new System Shock players. Doom might be straightforward action-fare, but at least its controls got right to the point. System Shock is far more convoluted: “Click once to view an item. Double-click to pick it up. Click to add it to your equipment, or right-click to throw it on the ground. Click your inventory button, then click the object you’re interested in, then double-click to actually use it. Want to kill that robot? Let me show you that right-click button again.” Did System Shock want to replicate the process of recovering from a six-month coma? If so, mission accomplished.

Thank SHODAN that Night Dive Studios included remappable buttons and a toggable mouse-look mode, or you’d still be clicking the mouse to turn left. But even with those concessions, System Shock takes getting used to. This game clearly comes from an era when players were expected to read the manual before starting the campaign. You can get used to it, but usually after taking the time to find a control scheme which works for you. 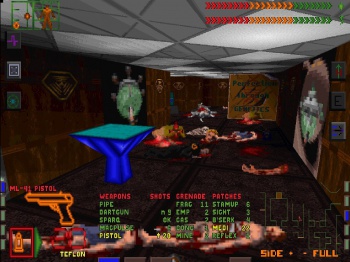 Still, for an action game, System Shock‘s controls won’t hinder you as much as you’d expect. This game operates at a much slower pace than your average shooter, emphasizing exploration and atmosphere over constant shooting. You’ll usually only confront one or two enemies at any given time, making it easier to focus on strategy. And when you do face more, you can position yourself defensively in a hallway, or throw a grenade to keep them at bay. Don’t get me wrong, you’ll have many fast-paced action sequences – especially if you attract SHODAN’s attention – but you’ll spend even more time carefully checking your surroundings for clues.

For a 90s action game, System Shock placed a remarkable emphasis on worldbuilding. Scattered across Citadel Station are dated emails and staff data logs, each forming a gruesome picture of the past six months. You’ll read about resistance groups cut off from Earth, fighting to survive and sabotage SHODAN’s invasion plans. You might even come across the results of their efforts – usually in the form of rooms filled with mutilated corpses. It’s genuinely creepy and unsettling, but wonderful from a storytelling perspective. Unlike Doom‘s empty Phobos base, Citadel Station feels like an real place where characters lived and died combating an insidious threat. You can see this approach reflected in modern sci-fi horror games like SOMA, and it’s humbling to spot those origins here.

System Shock‘s atmosphere isn’t quite as refined as its sequel, but it remains a crucial element. Different locations and events have their own music instead of a single level-wide track. You might be exploring normally, when the music suddenly drops off into a synthesized scratching noise, signaling upcoming threats of nearby rooms. Even in regular chambers, certain combat encounter can set off a warning bell that intensifies the experience. What’s strange is how inconsistent such music is applied – outside of such moments you’re still listening to fairly standard action beats. I suppose System Shock couldn’t quite escape its 90s action game roots after all. 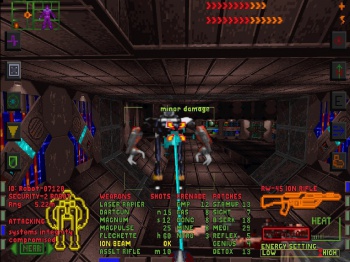 Perhaps System Shock‘s most memorable trait – for better or worse – is how complex gameplay can become. Each map is a massive network of hallways and chambers, efficiently packed together like an actual space station. Health, energy, and even fatigue systems are all represented on your interface. Even combat has multiple layers of depth. You can use stun or dart guns to knock out organic opponents, or use EMP weapons on robots. Some weapons can be armed with various ammunition types, while others draw from your personal energy bar. Speaking of your energy bar, it powers physical upgrades ranging from a head-mounted flashlight, or a rearview camera to watch for enemies. The options are both overwhelming and liberating, as you’ll have countless options for playing System Shock your way.

And that’s not even getting into features like Cyberspace mode, the time-honored 90s tradition of letting hackers insert themselves into a cyber world. If you thought System Shock‘s base controls sounded confusing, they’ve got nothing on Cyberspace. Your avatar floats freely in a world of see-through grids, items and directional pointers are difficult to tell apart, and you’re always under pressure to complete objectives . Wait around too long and SHODAN will send enemies or boot you back into your body. But in Cyberspace, I was my own worst enemy, flying into walls I thought were passageways and flailing from one object to the next. Perhaps that’s just me, but I’d say reading the Cyberspace manual chapter is strongly recommended – or lowering Cyberspace difficulty in the game options.

System Shock wasn’t perfect, but it offered a rich experience few games could match – blending action, horror, and exploration into something truly unique. It doesn’t quite line up with modern design sensibilities anymore, but it’s still a worthy gaming classic, and a joy to play today.

Good Old Reviews will be back next week with another PC re-release: Final Fantasy V. In the meantime, is there a retro game you’d like to see covered in this space? Contact me via private message or Twitter to let me know!