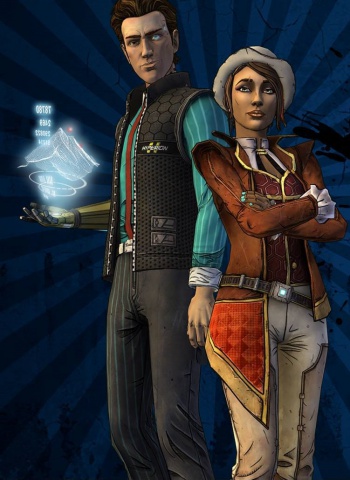 Tales From The Borderlands might come from the developers of The Walking Dead, but don’t expect the same level of despair-inducing choices.

Telltale Games is still riding high on the success of The Walking Dead – a success so potent that the studio can afford to branch out with new series based on Fables, Game of Thrones, and Borderlands. That last one surprised a lot of people; the slapstick ultraviolence of Borderlands doesn’t really mesh with the grim depression of The Walking Dead. Telltale isn’t a one-trick pony, however – the plan for Tales from the Borderlands doesn’t revolve around moral choice so much as immoral choice.

“It’s not a morality game,” explains Telltale Games co-founder Kevin Bruner. Whereas The Walking Dead‘s Lee often had to figure out the right thing to do, the protagonists of Tales from the Borderlands couldn’t care less about good or bad – they’re just greedy. “That generally has pretty funny, unexpected consequences, but you’re rewarded for trying to lie, cheat, and steal.”

Given that the two protagonists in Tales from the Borderlands are a hacker and a con artist, it seems like players will have plenty of opportunity to swindle their way to success. Say what you want about the treacherous world of Pandora – after a painstaking journey through the zombie apocalypse, this adventure is shaping up to be downright liberating.