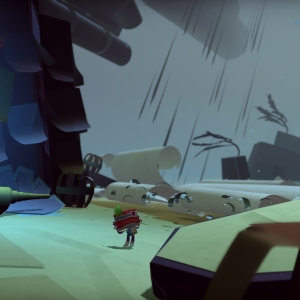 The retelling to the PS Vita title from Media Molecule is downright adorable.

I never got into origami. Folding paper into animals was hard for me, but I did always appreciate what magic others could craft from such a simple material. Tearaway Unfolded aims to do something similar by delighting gamers with its cuteness wrought from such simple pleasures. Media Molecule continues to give Nintendo a run for its money in the cute department. Unfolded is an expanded retelling of the PS Vita title everybody loved last year. For many, including me, Tearaway Unfolded will be the first time PS4 owners will get a chance to play it. Expect Tearaway Unfolded to be mentioned in the same breath as Kirby’s Epic Yarn or Mario Galaxy for years to come.

The world of the game is derived entirely from pieces of paper. Animals, trees, and even the “people” you meet are rendered to look like little pieces of paper or cardboard. Even the protagonist, the messenger, is paper. On top of the amusing look, the sound design of Tearaway just exudes delight. The way the characters speak is akin to Simlish, but more musical, and the chittering squirrels, the “smartest” animals in this world who handle most of the tutorial, are just sweet.

But that’s not even the best part of this game. The mechanics are simple but undeniably enjoyable in how they take advantage of the Dual Shock 4 controller. You can “bounce” certain areas by pressing the touch pad – this can be used to get to high places with your character or just because of the pleasant “womp” sound it creates. The squirrels also explain how you can throw objects into the controller and then shoot them out using the Dual Shock’s gyroscope-aided aiming and a flicking motion on the touch pad. This can be used to trigger mechanisms in the world for some puzzle solving. There’s also a mechanics you can use to shine a light in dark places – no, it’s not from Galadriel – to hypnotize some enemies and get them to move around where you want.

In short, Tearaway uses all of the bells and whistles the PS4 controller has to offer in incredibly unique, creative and delightful ways. Get it for your kids or the kid in you in 2015.