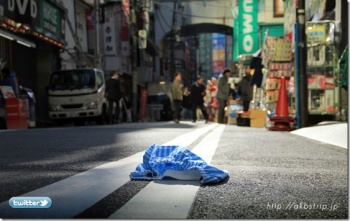 Acquire has been photographing a pair of underwear as it travels around Japan, but nobody really knows why.

Japanese videogame developer Acquire, known for Tenchu and Way of the Samurai, recently started teasing something very… interesting. On a teaser website, the company is rotating images of boxer shorts in various situations around the Japanese district of Akihabara.

Sometimes the shorts are just lying on the street, while other scenes are more action-packed with the pair hanging from a tree limb or a pole. The boxer shorts themselves have a blue and white striped pattern and look to be either a medium or large.

An associated widget lets you tweet about the strange images along with text that says “Akihabara x Trunks.” If this is a clue towards what the website is referring to, I hope someone has the ability to explain, because I’m baffled.

The name “Akihabara x Trunks” sounds like Namco/Capcom crossover Street Fighter x Tekken, but I doubt Acquire is developing a game where underwear battles against the district of Akihabara. Acquire released a series of games called What Did I Do to Deserve This, My Lord!? on the PlayStation Network in 2010, so this could be a tease for another unique downloadable title. I’m personally hoping that the boxer shorts are a disguised ninja, and Acquire is making a new, but actually good version of Tenchu.