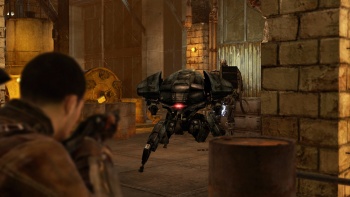 Evolved Games is recalling all copies of Terminator Salvation for the PC after complaints surfaced that a bug doesn’t allow users to install the game, much less play it.

Terminator fanatics who wanted to get a sneak preview of the plot of the new flick, Terminator Salvation, may have decided to check out the videogame to find out how the movie ends. (Hint: John Connor probably saves the world.) Those unlucky souls who bought the PC version may have to wait until the movie comes out tomorrow, though, because Terminator Salvation on PC is broken. You can’t install it.

“Unfortunately a defect occurred during replication of the PC version of Terminator Salvation, which does not allow end users to install the game,” publisher Evolved Games said in a statement. The Xbox 360 and PS3 versions of the game are defect-free.

Evolved is recalling all PC copies of Terminator Salvation from retail and are currently producing, or, as they put it, “replicating” new copies. Replicating, huh? By that do they installing the hidden program on the disc that’ll turn your PC into a self-aware killing machine and jumpstart the end of the human race? I would keep a vat of molten steel nearby when playing, just to be safe.

New copies of Terminator Salvation will be on store shelves soon, promises Evolved, and a replacement plan for owners of defective copies is being put into place. You’ve been warned, then. Buy Terminator Salvation digitally or get the console versions if you want to play the game as soon as possible. But be ready for Judgment Day.