When I play PC games I get really anxious. The whole process is actually outright stressful. Every time I play a game on my computer, I do so thinking that this time I’ll just relax and enjoy the game for what it is.So I start to play, usually an FPS, but without fail, five minutes into the experience, I have to go into options and mess around with graphic settings. This is because in that small amount of time I manage to convince myself that the frame rate is slower than last time which necessitates asking myself if the tree could be a little less green, my sight distance a little shallower or the sun not quite as uh, volumetric. It’s not that the frame rate of the game was actually slower – it was probably exactly the same as last time and the time before that – but the specter of my game performing at anything less than perfectly balanced levels of visual fidelity haunts me. So I sit in my chair, at taut attention, not awaiting the enemy around the corner but visual artifacts and game slowdown.

Of course the PC game’s great concession to the more nervous amongst us is scalability. The idea being that the ability to scale graphics to meet the demands of all systems should overcome any gameplay altering performance issues. And this is true: If I turned my settings back to High or, ugh, Medium, instead of Insanely High, I would probably have a seamless gameplay experience free of artifacts, frame rate issues and everything else that makes me break out in a light sweat when I sit down to play a PC game. I would also be pissed off to no end knowing that somewhere somebody is playing the same game I am with superior dithering.

Nevermind that I don’t actually know what dithering is, or that I may not even be able to tell the difference between differing qualities of dither, the fact remains that other people are having, with the exact same game, an experience superior to my own. If anything scalability makes the situation worse, as I’m forced to play through an entire game I know is running at half its potential. It’s a bit like having an engine governor set at 50 mph on your Ferrari.

While I’m playing through a game like this I’m left wondering how much better my experience would’ve been with a more powerful system. If I could see the beams of light cutting through the palm tree leaves would I have found some sort of profound contrast between that beauty and the corpses of enemies left in my wake? Sure Crysis is just another FPS, but if you’ve played on Ultra High settings might it transcend the run of the mill gameplay for which it was criticized? I’ll never know, and it kills me.

I believe there is an essential inequality to the PC gaming experience that weighs heavily on gaming enthusiasts and prevents many of them from trying it out. There’s no shared experience with PC gaming, only collective frustration as you try to scale a game to your system’s limit. The complaints of complicated running requirements and a general lack of turn-key game access as deterrents to would be PC gamers aren’t without merit. But none of those things will stop me from trying to play a really cool game. What will stop from playing that game is following it for months and seeing countless screen shots and yet having no idea what, when I finally get my hands on the game, it will look like on my computer. Will it run? Probably, but the idea that the experience might be severely altered is an overwhelming deterrent for me. 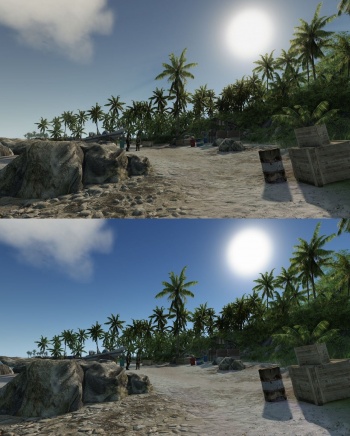 For PC gamers there’s always the question of “what if?” What if I turn down the anti-aliasing and increase the draw distance? Will that make it look more like all those videos on YouTube posted by users purporting to have roughly the same specs as me? What if I’m missing the latest patch that corrects the save file deleting bug near the end of the game? Eventually these questions also come down to money. What if I had the money to double up on graphics cards, to get that liquid cooling system? That’s not to say I’m always unhappy playing PC games because there are moments. I like Fallout 3 on my PC because I can max those settings out without batting an eyelash. In fact as a rule, any game I can play on maximum settings I feel pretty good about. There are also the games that live beyond their graphics, like World of Warcraft and the casual games.

It’s never clear exactly what experience a gaming PC is going to provide, even if it’s a new one. Crysis is of course the shining example of this uncertainty. When it was released, it didn’t matter if you bought a 5,000 dollar PC the next day you probably wouldn’t be able to play it. It was the ultimate tease. You can look but you can’t play because only Crytech and three other people have the keys to that kingdom. Strangely enough, it became one of the few instances where PC gamers felt a kind of camaraderie, albeit a depressing one. Instead of obsessing over tweak guides benchmarks and everything else, I felt like we all let out a collective sigh, admitted defeat and set our systems to, ugh, Medium.

Enthusiast level PC gaming is a constantly evolving compromise between the player, the game and the machine. I won’t lie, somewhere deep inside me is a masochist who loves this three way negotiation. I honestly don’t care what the game is, as long as it taunts me with technical difficulties I’ll be fascinated with it. That’s the real game I and other PC enthusiasts are playing – we are always trying, and never succeeding, to reach the level playing field at the summit of the mountain. While consoles place that field on top of a 400 dollar hill, who knows where the summit actually is with PC games? That’s why PC enthusiasts love the platform, and it’s also why graphically intensive PC gaming is doomed to obscurity. Now, if you’ll excuse me, I have a sweaty date with Far Cry 2 I need to get to.

Tom Endo once had a nightmare where his entire world was made up of visual artifacts.