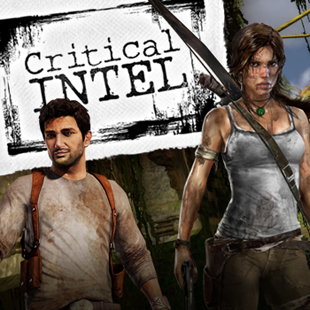 Uncharted 2 has my favorite cold opening in all of gaming. Drake, woozy from blood loss, wakes up in a train car dangling over a cliff. The player’s first task is to see Drake through the dizzying ascent, hand over hand, as the squealing metal of the railcar begins to deform and strip. It’s the perfect sweet spot of gameplay and cinematics, but there’s something most players don’t realize: Drake is never in real danger. Sure, it’s possible to die during the opening of Uncharted 2, but it’s designed to be difficult to fail for one reason: if Drake dies during the climb, it kills the pacing. As a result, developers use audio-visual cues to give the player a sense of threat, but make sure the obstacles themselves aren’t overwhelming. This is the challenge for action-adventure games: to inject players into death-defying Hollywood stunt sequences and make them feel like they’ve cheated death. The various tools for this have evolved over the years, from chase sequences to QTEs, but it’s always the threat of death – real or perceived – that drives the action. In the case of Tomb Raider, it’s even redefined the genre as a whole.

Much of the problem with agency vs. pacing stems from the relationship between games and the Hollywood blockbuster. A century of adventure serials, James Bond films, and summer popcorn-munchers have cemented the spectacular stunt as a necessary component of the action-adventure genre. Put simply, it’s thrilling to watch someone defy death. When we watch Indy run from a careening boulder in Raiders of the Lost Ark we get excited not because we think Indy’s going to die, but because we know he’ll somehow make it out intact. The reason we implicitly know Indy will escape is because of the nature of film: movies are a controlled environment. On some level we understand that we as the audience only see the best result of the action scene, where everything works perfectly and looks good. If Harrison Ford dodges left instead of right during filming or a stuntman misses a jump between two speeding cars, you just cut that film, reset, and do it all again (presumably with a different stuntman). Games are different since, to a certain extent, players take on the role of actors, stuntmen and audience. If a player misses a jump in a game, the audience sees the mistake and do-over, killing the momentum of the sequence as the game reverts to a save point. Tension in action films doesn’t come from the character dying, but from nearly dying, and when we see our avatar die it breaks both immersion and the sense of pacing.

Winston Churchill famously said: “Nothing in life is so exhilarating as to be shot at without result.” That feeling, the sense that you’re barely escaping with your life, is what action-adventure games try to capture. However, basic game mechanics throw a wrench in the gears, since to preserve a sense of challenge, players need to be put in danger of actually failing. In short, developers need to create the feeling of being shot at without result, while still making the player aware that the bullets can hit them. It’s a fine line to walk, with developers having to make the player feel like they’re in mortal danger without killing them. Really, it all boils down to how much agency a developer wants to give the player – they can either put the player on rails to ensure death doesn’t destroy the pacing of a stunt, or they can give the player more leeway and risk repeated failures destroying a player’s the sense of awe and excitement.

Uncharted 2 created a novel solution to this problem. While Drake is in little real danger during his ascent, all of the visual and auditory stimuli carries a sense of threat. There’s the yawing emptiness of the chasm, the squeal of rusted metal, and the wind buffeting him on his handholds. At predetermined points, pieces of the car unexpectedly separate and drop him, or send him swinging into space. None of this can actually kill Drake, but that’s immaterial. When you wrap players in such a compelling experience that their brains manufacture the sense of danger, there’s little need to actually try to kill them. It turns a simple climbing tutorial into a fingernail-gnawing experience. But the tradeoff is that it’s on rails, and the player doesn’t have a lot of agency – essentially, the sense of threat only works if the environment remains compelling enough to mask the scripted nature of the experience.

As a contrast, consider the much-maligned Quick Time Event, where devs replace the audio/visual danger cues with very real danger. QTEs have become the bête noire of the gaming community of late, but developers still rely on them when they need characters to perform an action that isn’t supported by normal gameplay mechanics. There are two main problems with QTEs when it comes to portraying stunts or other dangerous actions – the first is that they’re usually not properly integrated into the experience of the game. God of War worked because it made button combinations a mainstay of combat, mostly serving as finishing moves or memorized combos rather than saving the player from insta-death. Far Cry 3 and the original Uncharted, on the other hand, throw in instant-death QTEs with no warning, some of which only exist in one section of the game. What’s so frustrating about using QTEs this way is it feels like cheating. The developers are literally changing the rules of the game with little or no warning, and expecting you to learn on the fly. And because QTEs are tricky and precise button-press combinations, the player often fails on their first few tries, taking them out of the action. That’s the second problem: QTEs are so game-like that at best the player’s reminded that they’re pushing buttons, not fighting aliens or running from an explosion, and at worst they’re killed, destroying the pacing. The result is that most QTEs actually undermine their original intent by creating a sense of tunnel vision – players can’t admire the incredible visuals because they’re only looking at the button prompts that keep them playing. It’s the worst of both worlds, removing the player’s sense of agency while instituting an immersion-breaking penalty for failure. 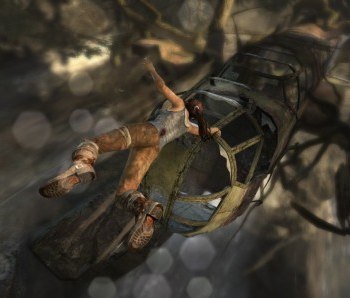 Another effort to strike a balance is the now-classic chase scene. In third-person games this usually involves running along a collapsing structure or evading pursuers, while in FPSs it usually means making some kind of running jump, whether to an adjoining building or the ladder of a waiting helicopter. The latter is a mainstay of the Modern Warfare series – consider the escape from the sinking ship in Call of Duty 4 or the Favela raid in MW2 – while the former makes appearances in Uncharted, the new Tomb Raider, and is essentially the only action in Temple Run. In all of these cases there’s a threat, whether it’s a collapsing bridge or a horde of Brazilian militiamen, that forces the player to keep moving. Next, there are obstacles to keep the player guessing and raise their stress level, usually involving periodic jumps or navigating winding corridors, and finally a punctuated ending like a near-impossible leap. The psychology of this is simple to explain but difficult to implement: players need to be kept going as fast as possible so they don’t recognize the on-rails experience, and there need to be threats of death that come up suddenly but are also clear enough visually that players can avoid them on the first try. That’s a harder thing to design than it might first appear. Visual cues and mechanics need to be tight and fine-tuned, and when they’re not it’s painfully obvious. On my third play through of Uncharted 3, I’d still regularly die during the cruise ship escape because the camera angle makes it hard to see incoming obstacles. Likewise, there’s a building-to-building jump during the Panama mission of Call of Duty: Black Ops II that’s so finicky I always miss it at least once. And like all videogame stunt sequences, the moment never feels as special once you’ve already died.

Which brings us to Tomb Raider, the latest installment in the action-adventure genre and a major innovator in how stunts get visualized in-game. Tomb Raider does a little bit of everything mentioned above. It has Uncharted-like sequences that aren’t dangerous, but convey a sense of threat such as when Lara runs along a burning rooftop or squeezes through claustrophobic tunnels. It has collapsing-bridge chase sequences with periodic jumps and (thankfully, slowed-down) QTEs that involve Lara fighting off enemies or jumping from zip line to zip line. It even has a new sequence – let’s call it “the waterslide to Hell” – where Lara falls down a crevasse and slaloms back and forth down a slippery chute, shot-gunning obstacles in her way. They’re well-designed sequences overall, though when they cross over it sometimes leads to deaths that feel cheap (that “Press X to Regain Handhold” thing should never be thrown in the middle of a chase sequence). Overall, it’s a smart evolution mechanically that gives the player a range of experiences without overusing one type – with the possible exception of the waterslide to Hell, which comes up a lot. The only issue is the threat of bodily harm and character death, which is a little too credible for an action-adventure game.

There’s no denying that Lara gets put through the ringer in Tomb Raider. Failing a QTE or zigging instead of zagging down a chute means getting strangled to death or impaled on bamboo poles. That’s a departure for the genre, which normally avoids player-character gore. You’d never see that kind of thing happening to Nathan Drake or Indiana Jones because it would ruin the optimistic action-adventure vibe of the game. When characters die in adventure games, they usually die bloodless deaths and restart quickly to let you try again. Players don’t see their characters bloodily dismembered because, frankly, that’s not what the game wants to emphasize. In action-adventure games, spectacular success creates a greater impression than spectacular failure – when it’s the opposite, you’re playing survival horror. While Tomb Raider‘s stunt system is generally rather innovative, it also has the genre backward. Incentivizing the player through the punishment of grisly imagery rather than the thrill of success basically tosses out the action-adventure playbook in favor of a darker tone. Violent death sequences brilliantly underline the game’s underlying message of survival against the odds, but they’re such a break from the classic conception of an action-adventure protagonist that they reclassify Tomb Raider as survival-adventure, something similar to Touching the Void or The Grey. These are stories where defying death brings relief, not excitement; where the main character pushes human limits not because they’re trying to steal an artifact or save the world, but because they need to survive. It’s an interesting direction, but it makes Lara more Isaac Clarke than Indiana Jones – which is why some people had a negative reaction, feeling that the game cast Lara as weak and fragile. She’s not weak, she just switched genres.

As game mechanics advance, it’s likely that developers will find more ways to give us incredible leaps and narrow escapes. But as we advance down that road, it’s important to strike a balance between perceived danger and actual danger, between scripted sequences and player agency, and above all, we must remember the conventions of the genres that inspire us.

Robert Rath is a freelance writer, novelist, and researcher based in Austin, Texas.  You can follow his exploits at RobWritesPulp.com or on Twitter at @RobWritesPulp.