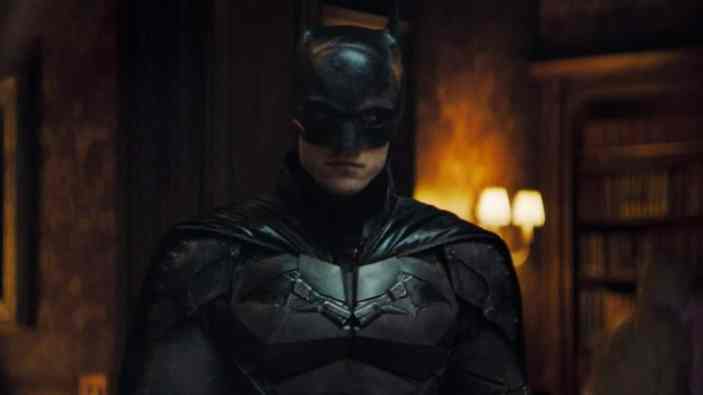 With only part of the film completed due to COVID-19 shooting delays, director Matt Reeves took the virtual stage at DC FanDome and released the first trailer for his upcoming film, The Batman. In it we get our first good look at Robert Pattinson as Batman and at the tone of the film itself. Both can be described in one word: dark.

It’s a bit striking as we watch Batman beat a street punk into a pulp in the movie, also giving us our first listen to Pattinson’s “Batman voice” (somewhere between Christian Bale’s gravel chewing and George Clooney’s George-Clooney-in-a-bat-mask voice). Reeves’ take on the Dark Knight, which is not part of the DCEU and features a less experienced Batman, is clearly one that is going to get twisted. The trailer definitely leans towards a grittier thriller style that hints at the likes of David Fincher or Bong Joon-ho crime films. Yet, there are hints of the Gothic flavor that Burton brought to his Batman films as well scattered in there with the sets and staging. It all makes the movie even more intriguing.

Pattinson isn’t the only one we get a good look at in the trailer. We hear and see Paul Dano’s disturbing Riddler, devoid of a green leotard and funny gags. We’re also given a look at Zoe Kravitz’s Catwoman, though only for a few fleeting, dark shots. There’s plenty of relatively well-lit Commissioner Gordon (Jeffrey Wright), however, along with the voice of Andy Serkis as Alfred. Colin Farrell also looks completely unrecognizable as the Penguin, which means there are some impressive prosthetics.

This isn’t the only Batman we’ll be getting in the coming year, though. DC has recently announced that both Michael Keaton and Ben Affleck will be returning to the role in The Flash, as they begin to set up a multiverse of films and TV shows.

The Batman releases in theaters on Oct. 1, 2021 — though those question marks at the end of the trailer are one hell of a cruel COVID-19 joke.