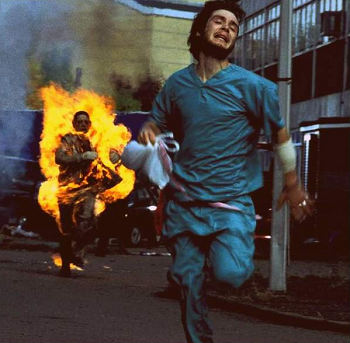 A recent poll conducted on Movies, Films, and Flix set out to determine once and for all: What are the greatest horror movies of the 21st century?

With that in mind, Mark Hofmeyer of Movies, Films, and Flix spent a great deal of time over the past few months polling and collecting data from various film-ranking sites (IMDB, Rotten Tomatoes, Metacritic, etc.), with the hope of determining what were the highest rated horror films of the 21st century.

When he had completed his research, Mark polled the readers of his own site to see how the choices would match up. Over 3,500 people voted, and Hofmeyer eventually compiled a list of 21 movies that included everything from cult hits like Session 9 to creature features like The Mist.

8. Shaun Of The Dead

1. The Cabin In the Woods

“What I like about the 21 films is they cover every aspect of horror,” wrote Hofmeyer, “It is an eclectic mix that features French transcendent torture, demon goats, ivory business cards, death via Merman and quite possibly the scariest child killer ever.”

That two of the movies in the top ten were released just earlier this year (Babadook and It Follows) suggests that horror may even be experiencing a much-needed and long-awaited renaissance, but like most of you, I’m waiting until Ouija 2 is released before I render my final verdict.

Head over to Movies, Films, and Flix to check out the full list. Personally, I would have included a little indie slasher called You’re Next somewhere on there, but what do you guys and gals think? How would your top 10 lists shape up?