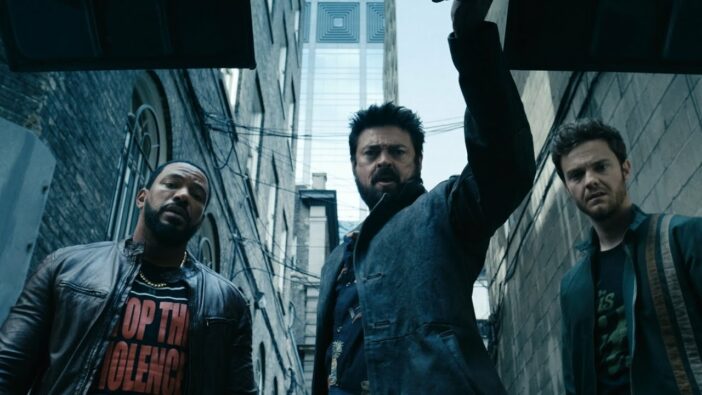 This article contains some brief spoilers for The Boys season 3 premiere, including “Payback,” “The Only Man in the Sky,” and “Barbary Coast.”

In its third season premiere, The Boys offers a timely portrait of masculinity in crisis.

This is most obvious with Homelander (Antony Starr) himself, who is still recovering from the public humiliation that his lover Stormfront (Aya Cash) turned out to be a literal Nazi. With his approval ratings dropping, Homelander finds himself forced to go on what amounts to a public apology tour. The show cleverly underscores how rote and how pro forma Homelander’s apology is by playing various versions of it simultaneously, as he repeats the words, the rhythm, and the intonation.

It is a familiar public spectacle, the art of the half-hearted public confession. The phrase “do the work” comes up multiple times across the third season of The Boys in terms of attempted public rehabilitation of controversial (white and male) figures, but used in the show’s trademark cynical fashion. “Doing the work” has just become another buzzy phrase that can be folded into a workshopped statement, all the better to avoid actually doing the work.

The Boys is never particularly subtle in terms of its political and social commentary, but it doesn’t need to be. It has also always been as much about celebrity culture as it is political realities, while understanding that those strands of American identity have become increasingly intertwined. Characters like Homelander and the Deep (Chace Crawford) are recognizable as privileged men who said or did something terrible, trying to work their way back into the public’s adoration. 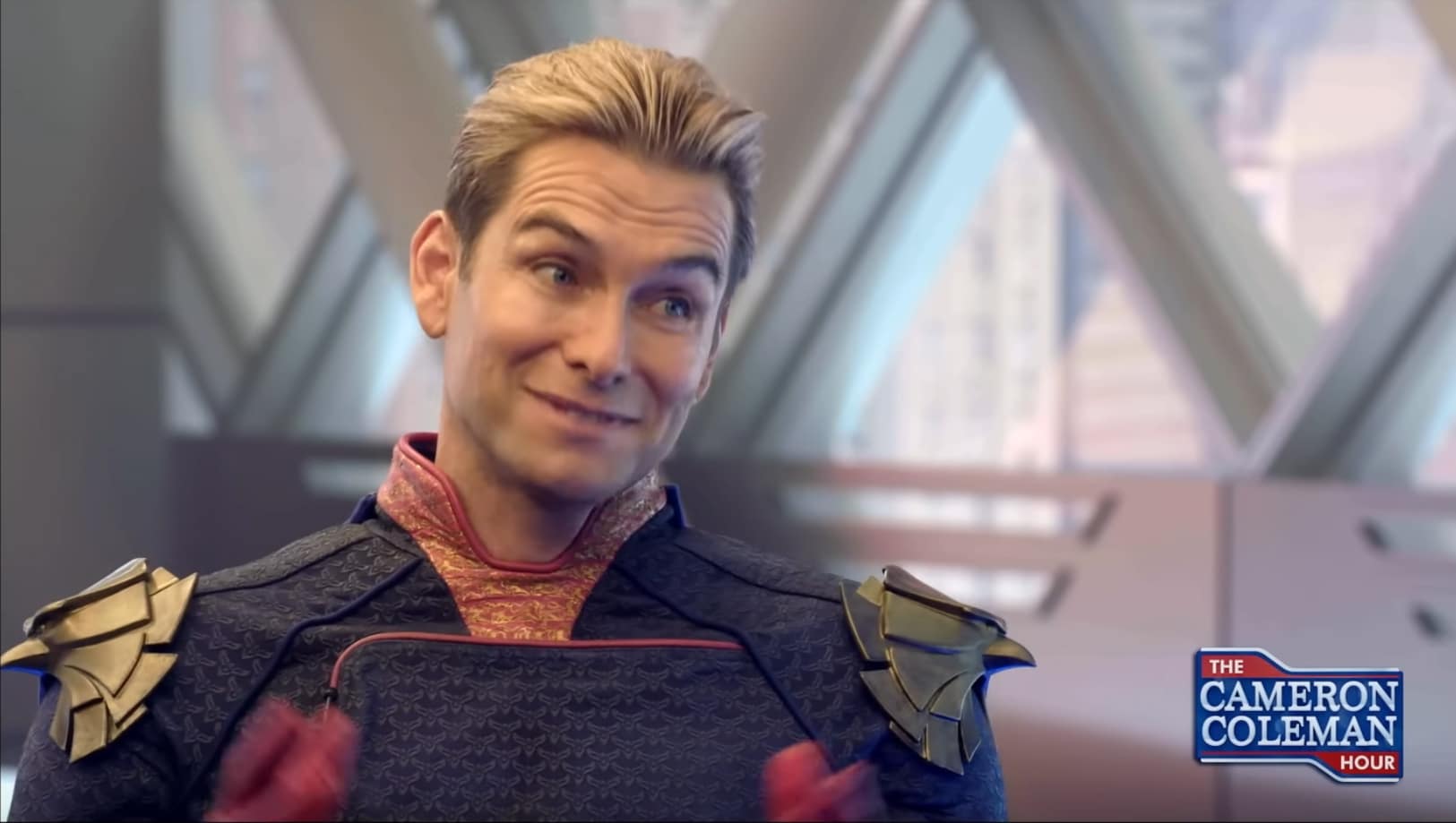 The Boys understands that the systems of media and capitalism are complicit in this, structuring redemptive narratives for these men. Season 3’s first episode opens with a scene from Dawn of the Seven, casting Charlize Theron as an antagonistic version of Stormfront to better frame Homelander as a valiant hero. The second episode features a trailer for the Deep’s somewhat lower-rent rehabilitation project starring Billy Zane as Alastair Adana.

Homelander is able to fashion these extremely modest (and completely insincere) gestures of introspection into a narrative of oppression and resentment. At his birthday celebration, he whines, “I am done apologizing, I am done being persecuted for my strength.” It’s a move that appeals just as much to “the red meat faithful” as Gunpowder’s (Sean Patrick Flanery) convention speeches, giving Homelander a “44% uptick with white males in the rust belt.”

It is a very pointed take on contemporary narratives of white male fragility. It feels oddly appropriate that Homelander spends so much time appearing on a cable news show that is transparently a stand-in for Tucker Carlson, given Carlson’s preoccupation with the topic. Homelander is the most powerful man in the world, and so the simple act of having to acknowledge that he made mistakes is an affront to him. 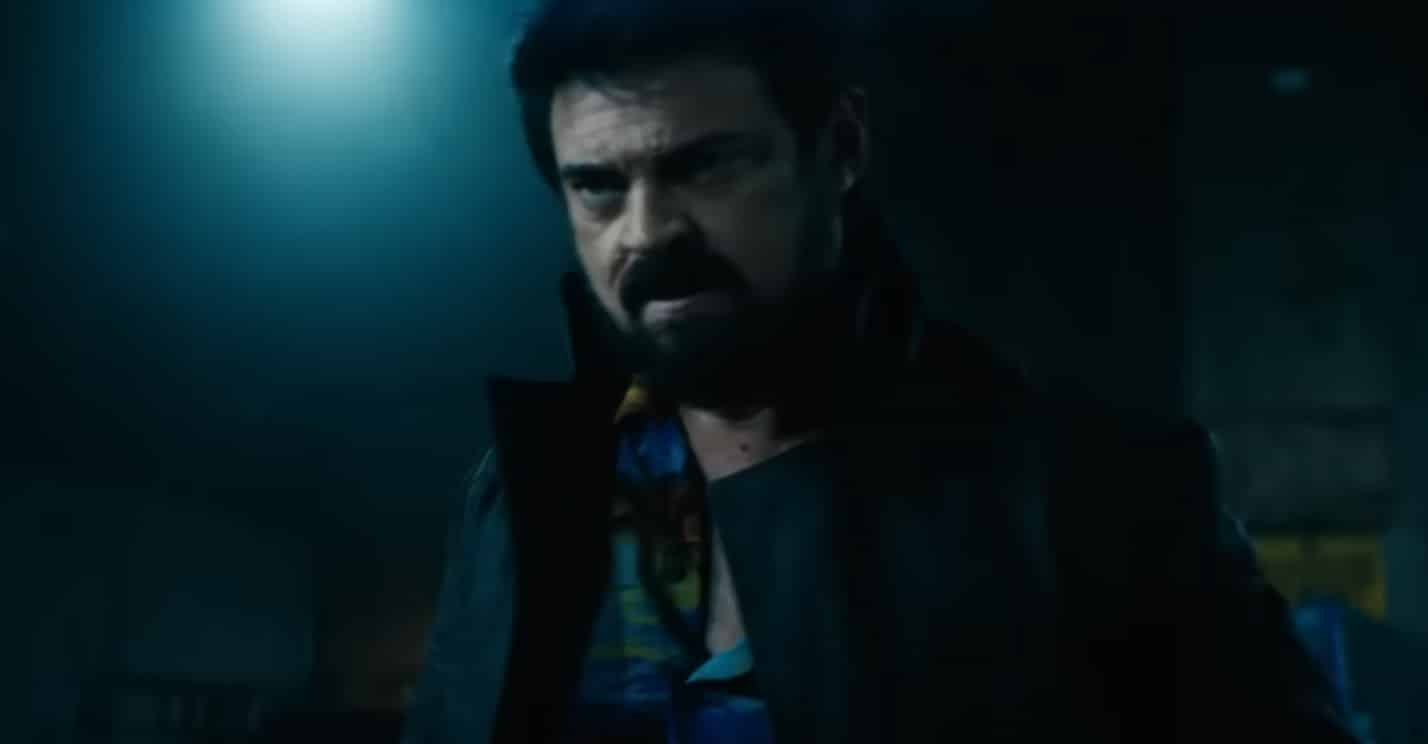 However, one of the more interesting aspects of The Boys is the way in which the show suggests that Homelander’s insecurity is in no way unique. One of the potential issues with the second season finale’s reveal that Victoria Neuman (Claudia Doumit) was secretly superpowered was that it risked pushing the show towards “both sides” nihilism. To the credit of the third season premiere, The Boys finds something interesting and insightful to mine in that premise.

Notably, both Butcher (Karl Urban) and Hughie (Jack Quaid) are revealed to be just as insecure in their masculinity as Homelander. Butcher is humiliated by Gunpowder in a fight and so resorts to dosing himself on Compound V in order to win the rematch. Hughie feels outclassed by his girlfriend Starlight (Erin Moriarty), jealous of her superpowered ex-boyfriend Supersonic (Miles Gaston Villanueva), and uncomfortable that he might need her protection more than she needs his.

Hughie offers all sorts of half-hearted justifications for his insecurities. “The high road doesn’t work,” he boasts. “We have to be as mean and as fucked up as they are.” More candidly, he confesses, “I’m just so tired of losing.” Increasingly, for characters like Butcher and Hughie, it seems like winning is more important than being right, that their pride matters as much as their cause. It is a smart and astute choice that other team members like Marvin (Laz Alonso) don’t agree.

In particular, the episode directly contrasts Kimiko’s (Karen Fukuhara) guilt and shame over her powers with Butcher and Hughie’s hunger for theirs. Just as Butcher and Hughie are dosing up on Compound V, Kimiko is lamenting, “I hate my powers. I wish I never had them.” The show reinforces this parallel by cutting from Kimiko talking about “this poison, this curse in (her) veins” to Butcher nursing his injuries. Kimiko understands power in a way that Butcher never can. 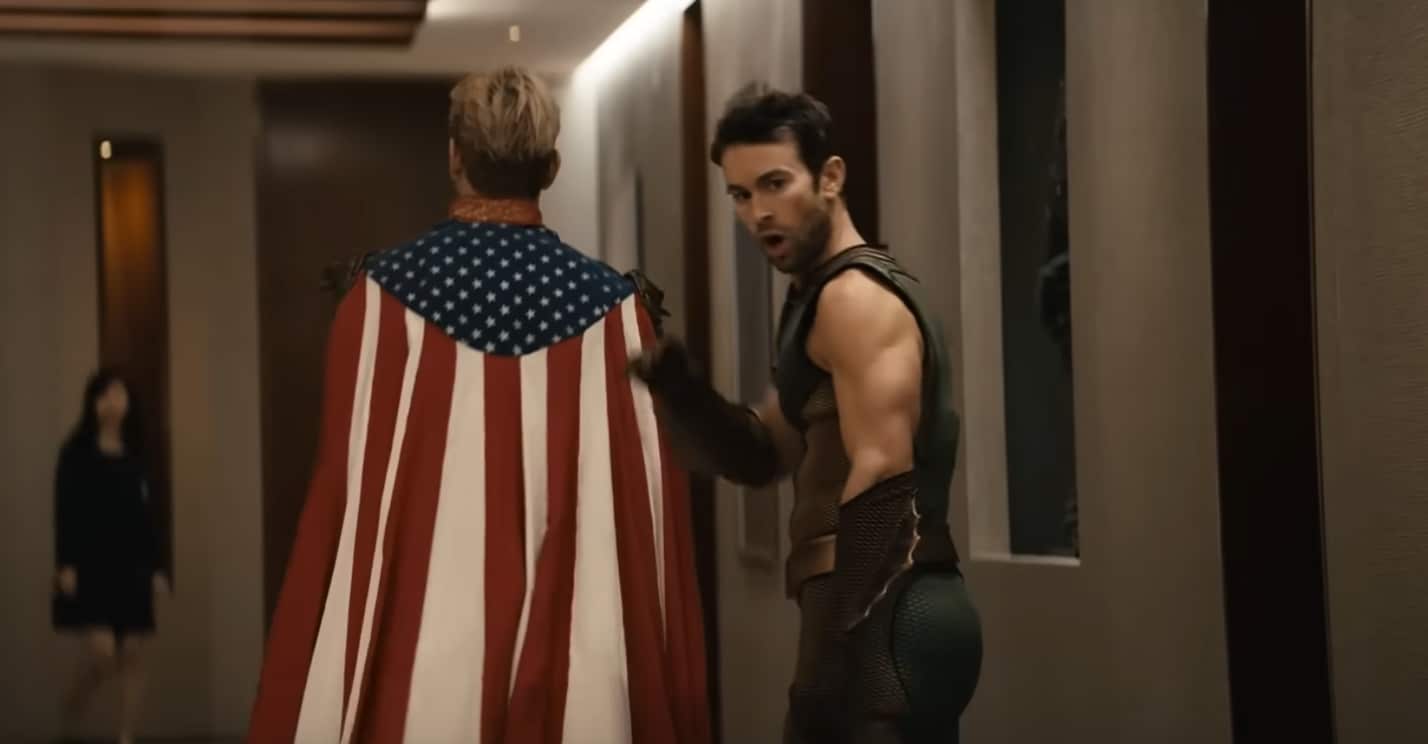 The Boys has always had an interesting and perhaps conflicted relationship with the source material that inspired it, often transcending Garth Ennis and Darick Robertson’s comic book to offer something a bit sharper in its social commentary. One of the more frequent criticisms of the original comic book is that it loses any sense of moral cohesion once the protagonists give themselves superpowers, essentially turning the antiheroes into a gigantic group of hypocrites.

The show gets around this by placing a much greater emphasis on the compromise that Butcher is making by juicing himself with super-serum, effectively undermining his entire philosophical point while trying to make himself feel suitably empowered. The Boys understands that this is a bad decision, effectively paralleling the arcs of Butcher and Hughie with that of Homelander, these white guys who feel humiliated despite (or perhaps because of) the privilege they enjoy.

Notably, The Boys repeatedly contrasts the insecurities of these characters with the actual struggles of others. In flashback, it is revealed that (at least the original version of) Black Noir was an anonymous African American kept in a mask for fear of alienating southern audiences. Similarly, Starlight’s public humiliation by Homelander is compared to the highly sexualized beauty pageants that she attended in her youth, dancing to “Oops!… I Did It Again.”

The Boys understands the absurdity of a world that treats the public rehabilitation of the Deep as more important than seeing justice done for Starlight. It’s a world where the Deep can look at his victim and earnestly remark, “I’ve put in the work and I realize that — when you’ve made an unforgivable mistake — the first person you have to forgive is yourself.” Homelander can comfortably appropriate Martin Luther King and cite him as a personal role model. 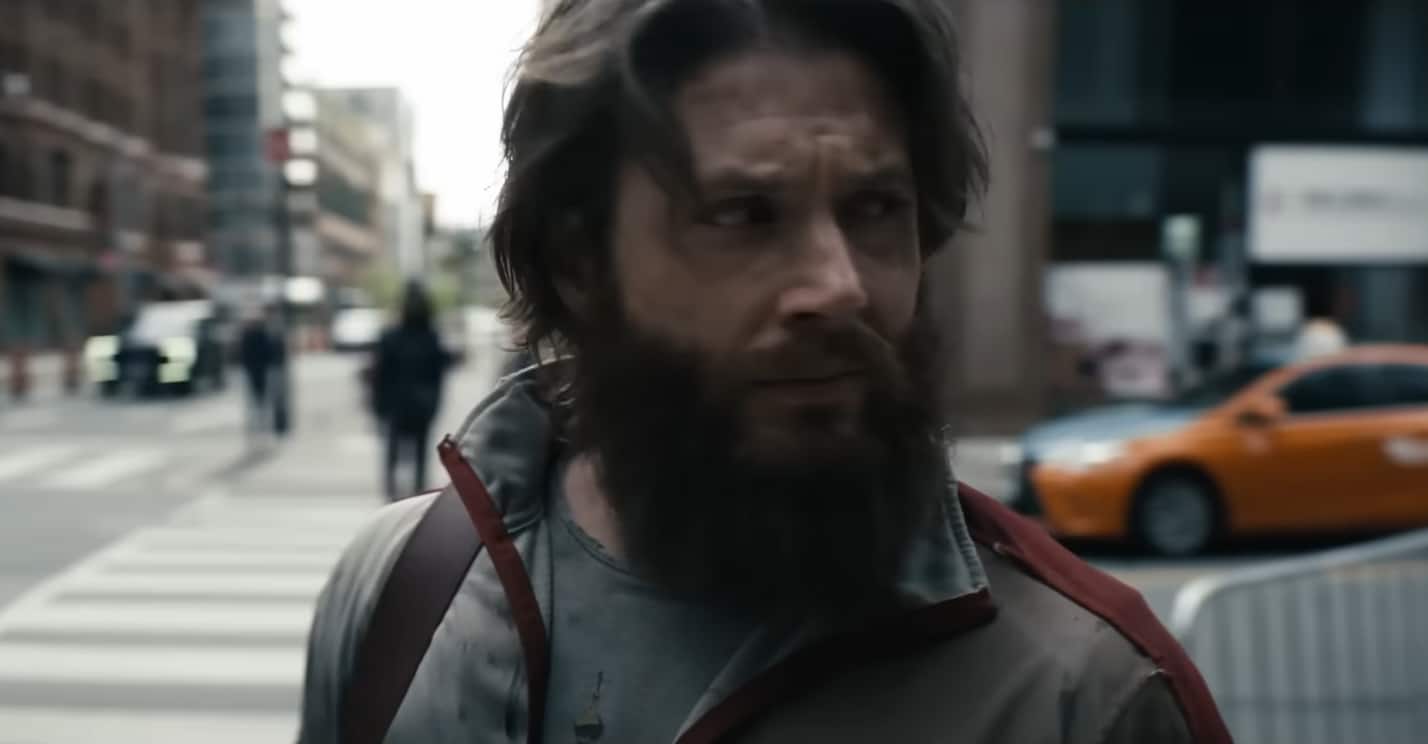 It is a timely counterpoint to the power fantasy that informs so much of modern superhero cinema. The Boys recognizes that it is difficult to fight oppression while using the same techniques and weapons. The master’s tools will never dismantle the master’s house, to quote Audre Lorde. The show parallels this with Starlight contemplating whether she can change Vought from the inside through incrementalism.

Starlight is offered the position of “co-captain” of the team with Homelander and contemplates what she could do with that power. “First female co-captain of any superteam ever,” she tells Hughie. “Think about what that would mean to millions of girls.” It’s a commendable impulse, but the show understands the limitations. This is a trade. Starlight is lending Vought her credibility and her popularity in agreeing, and ultimately legitimizing the corporation’s status quo.

This is the devil’s bargain that many disenfranchised groups face in working with major corporations. Netflix claims to care about minority and female storytelling, but clearly only as far as this serves the bottom line. Ava DuVernay became a vocal supporter and mouthpiece for the corporation, only to see some of her projects shelved when the company’s stock fell. Do Disney’s small gestures toward representation balance out the company’s larger support of politicians pushing against diversity? 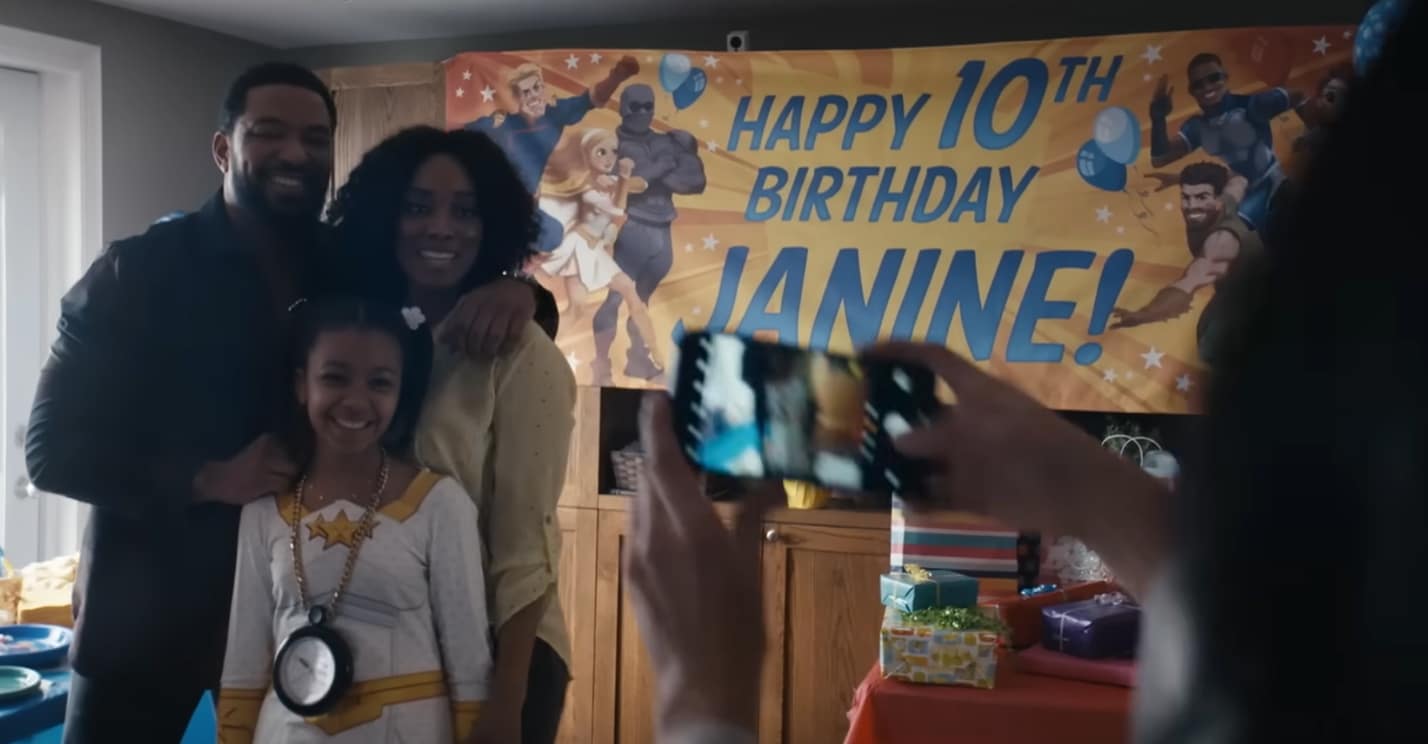 Appropriately enough for a show launching the weekend after the release of Top Gun: Maverick and the first volume of season 4 of Stranger Things, the ghost of Ronald Reagan hangs over this season premiere, perhaps tying into that intersection of celebrity and political power. “People do love a cowboy in the White House,” observes Stan Edgar (Giancarlo Esposito), evoking the former movie star’s transition to president of the United States.

This is also evident in the introduction of the obvious Captain America stand-in Soldier Boy (Jensen Ackles). In a sly nod to the conveniently erased chapter of Captain America’s history as the “Commie Smasher,” Soldier Boy is shown testifying before Congress with “a list here of avowed Communists.” However, Soldier Boy is also revealed to have been active in Central America during Reagan’s presidency, even complicit in the CIA’s (real life) smuggling of cocaine into the United States.

Even then, in the context of United States intervention in Central America, it all comes back to fragile masculinity. Mallory (Laila Robins) recalls her brief encounter with Soldier Boy, which included her rejection of his none-too-subtle sexual advances. Even in the midst of a foreign war, Soldier Boy’s ego bristles. “You know, if you were a little nicer, maybe you’d find a man,” he chides her. There is something truly horrifying in that insecurity nestled behind so much unbridled power.

The Boys certainly lives up to its title as season 3 begins, in its fascination with supermen who are anything but.