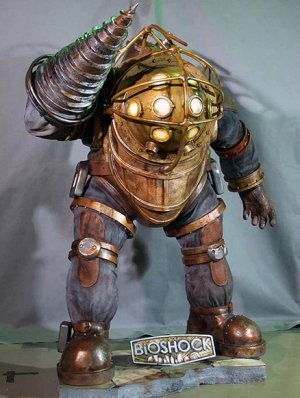 I bought BioShock the first week it came out, deftly swiping it out from under somebody who actually pre-ordered but failed to pick it up in the first few days. That much I feel really good about, but I’ve yet to actually beat it, and that sucks. Much as I hate to say such things, these days it feels like gaming is just another on the list of many responsibilities I have, and, as I learned from Spider-Man, with great responsibility comes great anxiety and annoyance.

I don’t know what happened; it didn’t used to feel like this. Games were the stepping stones leading across my life, leaping from one title or system or genre to another: tabletop roleplaying to DS puzzle to console adventure to GBA re-release of console classic, and so on.

It was a good life.

Back in high school, my buddies and I managed ongoing Super Smash Bros.: Melee matches backstage during theater productions – and the department was hardcore, so pulling that off without a hitch was a miracle in itself. We were the master-class geeks, lords of all nerd-dom. When we played tabletop, we played our own system. It was who we were and how we lived. Games flew by week by week, world by world.

Then, it just … crashed.

My final semester of college I played through two, maybe three games – one of which I started mid-summer. I didn’t feel like myself. And when I did make time for gaming, the experience was cramped and uncomfortable.

There’s a lot I could blame it on: wrapping up my Bachelor’s degree; living with new, foreign roommates who didn’t understand/frowned upon the six-plus hour gaming sessions; solar winds; not drinking enough milk to counterbalance the massive amounts of snacking I do, resulting in Oreo-overdose brain damage. But the truth is it’s always been a problem.

In my life, the dark secret has always been how many games I haven’t played, or rather how many games I own that I haven’t finished. There’s not a specific pile – I’d like to think I’m more discrete than that – but I could name them, every single one, if I wanted to.

But that would be far too embarrassing.

The biggest ones are Prince of Persia: Warrior Within and its sequel, The Two Thrones. I absolutely loved The Sands of Time, and I awaited its sequel with all the expected fanboy rabidity. That is to say that I got it in December of 2004, when it was released – but as many times as I’ve given it a shot these past few years, the frustrating shift in aesthetic always boots me out again, and I invariably toss it aside. This became even more ridiculous when I received the third iteration of the series as a gift, and my anal-retentive nature refused to let disc meet tray until I conquered its predecessor.

Maybe I’ll get to it after I beat BioShock, which was itself interrupted by Assassin’s Creed. To be honest, I was almost dreading Christmas and the weight of games I might not play in the foreseeable future.

Then I played Portal across the midnight between December 25 and 26 – which makes it the second game to supersede BioShock, but what the heck, right? It was fun. What an odd realization.

Gaming, much like any of the other “legitimate” hobbies, is supposed to make us feel good. There’s some sort of mental stimulation we’re expecting, otherwise we wouldn’t be tossing the industry all this money, right? Maybe it’s a test of skill, maybe it’s to be horrified in crazy, new fog-shrouded ways, or maybe it’s a way to connect with your friends.

But when you force it into an already collapsing timetable, well, you might get the gaming done, but at the cost of why you were doing it in the first place.

I guess the lesson here is balance, because as much as I love gaming in every available form (except online games, due to my being somewhat of a misanthropic tightwad), if it needs to be pushed aside for a while, I think it’s best to let it go. Because the important thing isn’t being a gamer, it’s playing the games.

So screw it. Maybe I’m slow, but it’s not like I have something to prove. I don’t need to be better than anybody and anything – except the occasional round of Smash Bros., and if I lose there, well, as long as it’s fun and I find creative new epithets with which to mar my buddies’ brains, I’m happy.

So maybe I’ll toss in The Sands of Time, try to recapture the magic, finally push through Warrior Within as the middle chapter of a trilogy rather than a despondent white whale of a standalone game.

Or I’ll play through Portal again. Or BioShock.

It should be fun.