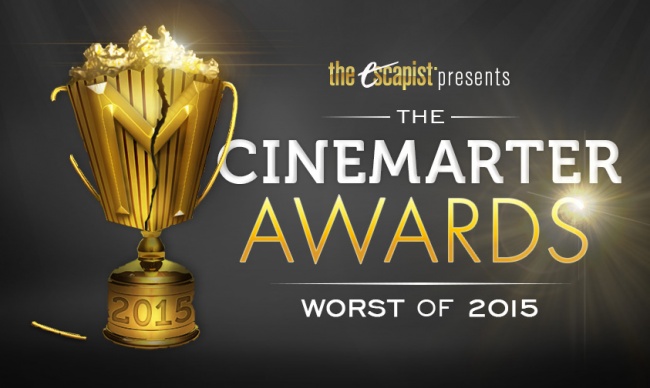 (If you missed yesterday’s Best of 2015 CineMarter Awards, click here to view them.)

2015 had a lot of terrible, terrible movies. It had more of them than the average year, it felt, although that might’ve just been because I saw far more films, too. With VOD continuing to rise to prominence – a cheap way to release a terrible movie to a less discerning audience – and the Hollywood system seemingly reveling in incompetence, we’re going to get a lot of junk. Today’s CineMarter Awards celebrate – or, more appropriately, mock – the bad films of 2015.

If you wish to travel to a specific award, just click the title of the award (if you have multiple pages; if you don’t, you’ll have to scroll down). Otherwise, browse through by clicking “Next” at the bottom of the page.

While I’ve previously looked at my worst films of 2015, that was before I had a chance to catch up on a some things I missed earlier in the year, and it was also before I had seen Point Break. Little Boy, for instance, didn’t even come out here, despite its wide release in America. It was a tone-deaf religious movie with just the worst kid actor of the year in the lead. Paranormal Activity: The Ghost Dimension took everything that was scary about the franchise … and explained it to us so we’d no longer be scared, as if it was a parent worried we’d have trouble sleeping. Point Break is the laziest, most inept action movie of the year, led by a charismatic black hole and populated by some of the least intelligent philosophy you’ll hear at the cinema. And The Ridiculous 6 was Adam Sandler’s Netflix-exclusive debut and, in it, he insulted Native Americans for a couple of torturous hours.

To declare the worst actor of 2015, I had a couple of criteria. I wanted an actor who had more than one bad performance, as well as an actor who didn’t have a single bad performance. Johnny Depp was awful in Mortdecai, for instance, but he redeemed himself in Black Mass. So, the search was on. Adam Sandler made the list thanks to Pixels, The Ridiculous 6, The Cobbler, and Hotel Transylvania 2. Hayden Christensen had a terrible year, leading 90 Minutes in Heaven, Outcast, and American Heist. Kevin James went from returning to the Paul Blart franchise to inexplicably being the President of the United States to then trying to seduce a woman whose husband was overseas at war. And he had this awful mustache for a couple of the roles. Nicolas Cage is still apparently paying off debt, and he was forced into awful roles in The Runner, Outcast, and Pay the Ghost. Finally, Ryan Guzman was one of the worst things in two lousy films, The Boy Next Door and Jem and the Holograms.

Worst Actress was a harder category to come up with for me than Worst Actor. I kept my criteria of (1) more than one bad performance and (2) no good performances, but since roles for women are often just non-entities, rather than exceptionally good or bad, this became difficult. Still, there were some who stood out. Dakota Johnson bored us to death in Fifty Shades of Grey, but was also terrible in Chloe & Theo and Cymbeline. Emma Stone was a yappy loudmouth in Aloha, and then just a bore in Irrational Man. Michele Monaghan got to do almost nothing of consequence in Pixels, but then turned around to be just as bad in Playing it Cool. Mila Kunis was doing who-knows-what in Jupiter Ascending, but was even worse this year with an awful vocal role in Hell and Back. Finally, Teresa Palmer yawned her way through Point Break, but was also less than good in Cut Bank and Kill Me Three Times.

While VOD gives good independent films a chance at hitting it big on the rental market, it also gives distributors a cheap and easy option to release terrible movies to audiences who might not care as much about quality given that they’re only spending about half the price of a theatrical release. Streaming services like Netflix and Amazon are also producing original content, but that doesn’t always go right…

Accidental Love was a disowned and unfinished film directed by David O. Russell and starring Jake Gyllenhaal and Jessica Biel that was “finished” this year and released to unsuspecting audiences. It was abysmal. The Human Centipede III is the same as the previous two movies, but with a “bigger is better” approach, as well as some really terrible humor. The Man with the Iron Fists 2 managed to be even worse than the first one, even though star RZA relinquished the directorial reigns and gave them to the man behind the greatest film ever, The Scorpion King 3: Battle for Redemption. The Ridiculous 6 was the worst thing Netflix has ever done. And Vice somehow took a pretty good cast and an interesting premise and turned them into an abomination.

The Man with the Iron Fists 2

Jokes and themes can be misfires. Every comedy has them, and lots of dramas do, too. The best thing to do in these cases is move on. But, sometimes, films try to ride them out for as long as possible. Hotel Transylvania 2 took the “Daddy Knows Best” them from the first film and pounded it even harder into our heads. The Ridiculous 6 had “Exploding Donkey Diarrhea” throughout. Paul Blart: Mall Cop 2 was filled with “Fatty Falls Down” jokes (and “Daddy Knows Best” ones). Unfinished Business tried to make the word “Pancake” into a running gag. And religious movies like War Room, 90 Minutes in Heaven, Little Boy, and their ilk filled our head with preachy propaganda.