“A Song of Ice and Fire” would be an apt title to describe the current end-game Demon Hunter builds in Diablo 3: Reaper of Souls. While they all revolve around the Marauder’s set, players do have some choice in which element to gear toward.

While Lightning can be made viable, and Physical is emerging as a new option, we’ll examine the popular Cold and Fire variations of the Marauder build and determine which is right for you.

Note: The embedded video demonstrates the gameplay but is not completely up to date. Where the video and this guide differ, place precedence in this written guide.

This question alone should just about determine whether you gear for Cold or Fire. The Cold build relies on the Cluster Arrow: Maelstrom skill, whereas the Fire build opts for Multishot: Arsenal. Both of these skills are rocket-based, allowing us to use the Ballistics passive ability to skyrocket (hah, accidental pun) your damage, but the difference in behavior between these two skills is what determines their strengths and weaknesses. To put it simply: Cluster Arrow is better at dealing with single targets such as Rift Guardians, whereas Multishot is better at dealing with large groups of enemies.

Therefore, if your focus is on running Torment 6 rifts as quickly as possible, the Fire Multishot build is the way to go. If you would rather push as far as possible into the solo Greater Rifts, then Cold Cluster Arrow will handle those Rift Guardians much better – and they tend to be the stopgaps the higher you go.

Of course, both of these builds are more than viable in both rifts and greater rifts. If you have yet to complete your Marauder’s set, then you can follow this Demon Hunter starter build.

The heart of the Marauder playstyle revolves around laying down sentries, dumping Hatred through either Cluster Arrow or Multishot, and regenerating that Hatred.

The Marauder’s six-piece set bonus buffs your Cluster Arrow/Multishot damage by 100% for every active sentry you have, so you ideally want to have the maximum number of active sentries at all times. With the Custom Engineering passive ability and the Bombadier’s Rucksack quiver, you can have a total of five active sentries, which translates into a massive 500% increased damage. Plus, the sentries fire at the same time as you do, and while they are not buffed by this damage bonus, they still contribute a fair amount of damage.

The positioning of your sentries is key. The Polar Station rune on the Sentry skill gives each sentry a visible cold aura that slows nearby enemies, and we want to capitalize on this in two ways: by taking the Cull the Weak passive, which increases our damage against slowed enemies by 20%, and by using the Bane of the Trapped legendary gem, which basically does the same. Therefore, you want to strategically place your sentries to cover as much area as possible – without overlap – and ensure that the enemies you are targeting are within a cold aura.

Marauder builds run very resource thirsty, and Demon Hunters have a few ways of dealing with the constant depletion of Hatred. You will want to coordinate the cooldowns on Prepration: Punishment and Companion, which both instantly restore a chunk of Hatred. Because Companion gains the effect of every rune thanks to the Marauder’s set, it also serves as a short-lived damage buff, so it’s most beneficial to use this skill when 1. you have a Champion/Elite Pack or Rift Guardian to deal with, 2. Preparation is off cooldown, and 3. you have just enough Hatred left that using Companion will bring you to full Hatred without exceeding the cap (so when you have 50-60% of your Hatred remaining). The reason for this is that you want to maximize the amount of damage you do during the 10 seconds that Companion is buffing your damage by 30%, so you want to maximize the amount of Hatred you spend in those 10 seconds. Hit Companion, dump all your Hatred, hit Preparation, and dump all your Hatred.

The other tool you will use to recover hatred is your bracers-slot item: Reaper’s Wraps, which you can craft from a plan dropped by end-game boss Malthael in campaign mode. With these bracers, you recover roughly one-quarter of your Hatred every time you pick up a health globe. The Vault skill not only helps you evade dangerous monster attacks – it also allows you to quickly jump in, grab a health globe, then leap back to safety.

Another skill you will need to develop is a sense for how many attacks it takes to kill enemies – you will likely be overkilling in the beginning and wasting more Hatred than was necessary. When dealing with such resource-hungry attacks as Multishot and Cluster Arrow, just one extra click can make a big difference. 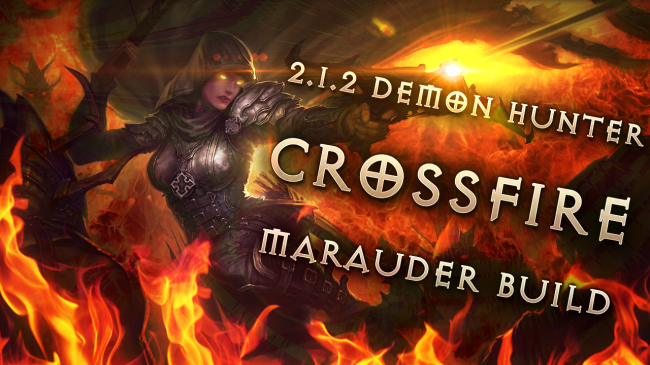 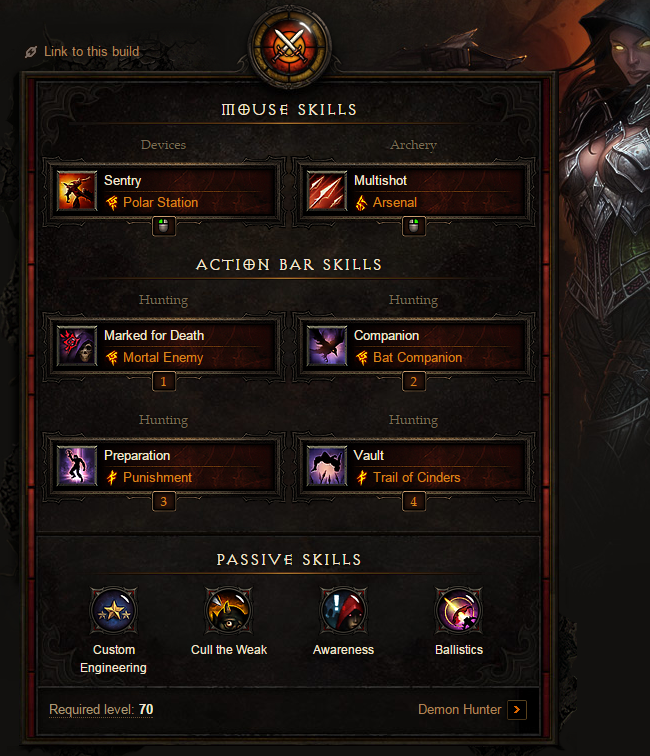 When running Torment 6 rifts, you can completely forgo a resource generator with the fire build. By stacking Resource Cost Reduction on your gear, not over-firing, and using a Cindercoat chest piece, which reduces the resource cost of fire skills by about 25%, you’ll rarely find yourself in a situation in which you are Hatred-starved. Further, the Mortal Enemy rune on Marked for Death effectively further reduces the resource cost of Multishot; just ensure to first mark an enemy in the group that you are targeting.

The Trail of Cinders rune on Vault is selected because Cindercoat’s Resource Cost Reduction will apply to the skill.

If you would like to be more aggressive, you can swap out the Awareness passive for Steady Aim, which will give you a 20% damage boost against just about all enemies, given how short 10 yards actually is in Diablo 3.

If you would like to push higher-level Greater Rifts, then you will need a Hatred generator. Swap out Marked for Death for Entangling Shot: Justice is Served, or, if you have a Kridershot bow, which makes Elemental Arrow generate Hatred rather than spend it, Elemental Arrow: Immolation Arrow.

A mixed build between Fire and Cold replaces Multishot with Cluster Arrow: Loaded for Bear. Because this rune does not fire rockets, you would also swap the Ballistics passive for Steady Aim. 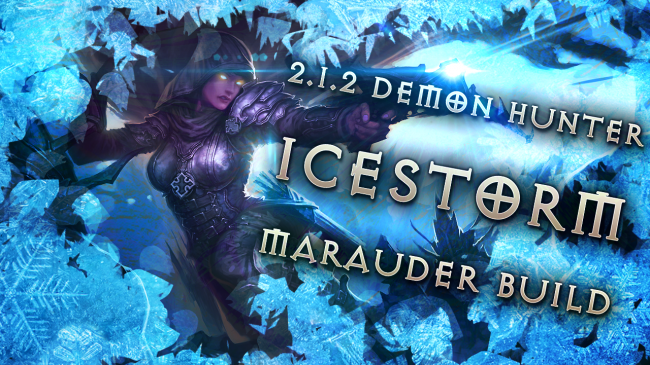 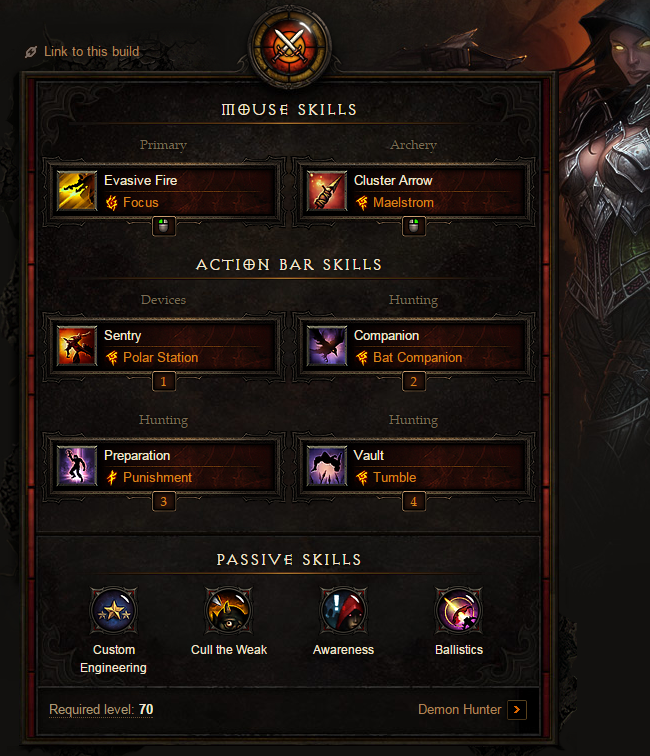 With the cold build, Evasive Fire’s shotgun-style attack is used mostly to generate resources rather than actually deal damage; simply spam the skill whenever you can to build up Hatred. You don’t even have to hit enemies in order to generate resource.

Rather than a Cindercoat, the cold build uses a Pride’s Fall helm to reduce all resource costs by about a third. This ability only comes into effect if you have not taken damage in the past five seconds, so it’s especially important to avoid taking any damage at all when running this build. Since you’ll be pushing higher-level Greater Rifts, and Demon Hunters are glass cannons that are instantly killed by most attacks, avoiding getting hit by anything is not a bad habit to form. 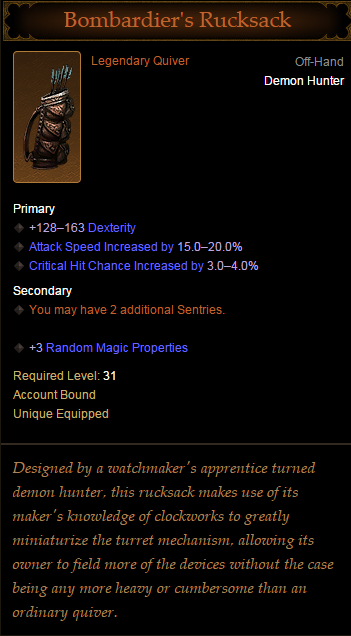 Gearing between the two builds is fairly consistent, except as noted, below. Here are the items you want for every slot, and the associated properties.

Amulet: The stats on the amulet will be more important than the amulet itself: Elemental damage, Critical Hit Chance, Critical Hit Damage, and Socket (for a legendary gem). For Torment 6 rifts, a Hellfire amulet with a good passive is best; for Greater Rifts, elemental immunity amulets – especially Countess Julia’s Cameo and the Xephirian Amulet – can be the difference between a pass and a fail. At higher Greater Rifts, Jailers will one-shot you with arcane damage, as will Thunderstorms with lightning damage.

Ring 1: Ring of Royal Grandeur, with Dexterity, Critical Hit Chance or Critical Hit Damage, and a socket (for a legendary gem).

Pants: Marauder’s, with Dexterity, Vitality, sockets, and Resistance to All Elements.

Boots: Marauder’s, with Dexterity, Cluster Arrow/Multishot damage, Vitality, and either Movement Speed or Resistance to All Elements if you can max out your movement speed with paragon points.

Legendary Gems: Bane of the Trapped, Bane of the Powerful, and Zei’s Stone of Vengeance. Try to stay half a screen away from enemies you’re targeting to gain the full effect of Zei’s.

Core: Get your total movement speed bonus up to 25%, then dump the rest into Dexterity.

Offense: Prioritize Critical Hit Chance and Critical Hit Damage and attempt to maintain your total CHC and CD at a 1:10 ratio. Next comes Cooldown Reduction, and lastly Attack Speed.

Defense: Prioritize Resistance to All Elements, then Life, then Armor.