It’s become a tradition here at The Escapist to do a “Five Favorites” roundup at the end of the year, where each of the staff members posts their own list of the five games they enjoyed the most over the past twelve months. It’s a fun little tradition, but we realize that it can tend to get skewed towards games released in the last part of the year – not only is that the blockbuster season, but they’re fresher in our minds.

Since summer is traditionally considered a low-key time in gaming with few major releases, we thought it’d be a good idea to use the downtime to give the first half of the year its due. Over the next week, The Escapist‘s editorial staff will be sharing three of their favorite games from the first six months of 2010 – along with one “extra” from whenever – that you might want to pick up during these summer doldrums. Are these what we think are the three best games of 2010 so far? Nope. Are they our three favorites, full stop? Nah. We just enjoyed them, and we think you might, too.

In contrast to John’s picks for this summer, I thought I’d hand out a few options for those of our readers who don’t happen to be Japanese schoolchildren. Diff’rent Strokes, as they say. And in the true spirit of global awareness that the World Cup has inspired on my fellow Americans, I thought I’d pick four titles that weren’t developed here in the States. How cosmopolitan! 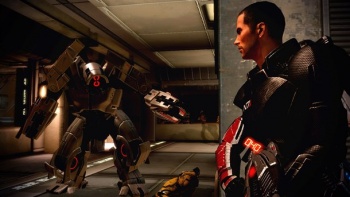 Yes, yes, I was one of those angry few who complained at length about the recent streamlining of some our more beloved RPG franchises, and Mass Effect 2 was one of my most frequent targets. But at the end of the day, I really didn’t care all that much that some of the RPG mechanics had been pared away. It helped to make the game more direct and, in some ways, less distracting than before. In the end, the removal of the mechanical trappings of the RPG genre wound up giving me more time to focus on what real roleplaying is about – reacting to and shaping an intensely satisfying story.

Perhaps my favorite part of Mass Effect 2 was having a chance to revisit the handsome devil I’d created for myself back in Mass Effect 1. All the old associations -the genophage, the autograph seeker, my special lady friend – instantly came flooding back and gave the sequel an individual appeal that was downright irresistible. And after the first ten minutes, I was forced to reexamine everything that I thought was motivating my character. The new Shepard was a little surlier, a little less cooperative than he had been playing errand boy for the Council and trying to prove humanity deserved their respect.

Most people just assume that Modern Warfare 2 is the pinnacle of modern multiplayer shooters but, for my money, Bad Company 2 is right there at the top of the heap. DICE has made a name for itself, and its Battlefield franchise, by delivering some of the most intense, most enjoyable and most captivating multiplayer games around and Bad Company 2 is easily the best the series has seen since the original Battlefield 1942. When the Port Valdez beta came out in January, I basically stopped working for an entire week just so I could play. The destructible environments alone are worth the price of admission here. You can’t beat watching an entire city fall down around your ears in the midst of a massive fight between infantry and a staggering range of military vehicles.

The final version of the game really opened up with a wide range of modes and maps that should give any online shooter fan enough variety to last them for a good long while. Custom kits, unlocks and perks also give a real sense of progression and personalization, so you really start to feel like you’re actually accomplishing something as you play. The best thing is that DICE has managed to preserve the sense of individual choice while also adding in lots of squad-based conveniences that help players get into the action more quickly and make smarter choices once they get there.

I have been justifiably accused of being a Total War fanboy. From the first demo of Shogun back in 1999, it was like Creative Assembly had tapped into my deepest digital desires. After ten years, Creative’s finally come around to focus on the general who, with the possible exception of Alexander the Great, most inspires our fascination with military strategy – Napoleon Bonaparte.

In focusing on the career of a single commander, the game loses a bit of the scale and variability of Rome and Empire, but this is Napoleon we’re talking about, so your campaigns will still take you from Paris to the Nile to Moscow. Whether you’re leading cavalry charges across the steppes of Russia or sailing frigates up the English Channel, the game captures the amazing feel of playing as Napoleon as he climbs his way to become Emperor of France. You can also take on the challenge of fighting against Napoleon as one of the members of the Coalition in the Grand Campaign.

Of course, the big draw is the tactical battle system. Provided you’ve got a PC powerful enough to push it to its limit, the game delivers some of the most gorgeous and dramatic visuals I’ve ever seen in a strategy game. Watching cannons tears through your brightly colored regiments as they march across a bloody, smoky field is probably not much fun in real life, but it’s downright irresistible in this game.

When I thought about adding one game from before 2010, I could have easily picked popular favorites like Civilization IV or Batman: Arkham Asylum, either of which would have provided many hours of gaming goodness during the hot days of summer. But why not take the time to highlight a game that’s almost as good and not nearly as well known? Paradox Interactive’s Hearts of Iron III is just the latest in a long line of Grand Strategy games from the Swedish publisher. Yes, it is abstract; yes, it is obsessively detailed; yes, it requires a tremendous investment in time and attention; and, yes, it is one of the most rewarding strategy games I’ve played in many years.

The game is essentially a real time simulation of all of World War II at a wide range of perspectives. You’ll be fighting, to be sure, but you’ll also be appointing and firing cabinet ministers, timing amphibious invasions with the weather, leasing your technology to your allies, restricting the availability of domestic goods to support your war effort, and basically handling every responsibility at every level. You can play as any country in the world, from the United States to South Africa. The way history suddenly takes off on a new course is one of the most thrilling things about the game, but be warned: in an era when most publishers are chasing the mainstream as fast as possible, this is an unapologetically hardcore wargame. That’s reason enough to love it.

Check back tomorrow for Susan Arendt’s suggestions for how to spend your hot summer days. See all of our summer gaming lists here.

Steve Butts might actually go play outside if it wasn’t a hundred degrees in the shade.