Widely heralded as the strongest E3 showing in a few years, perhaps because of, or in spite of, the profusion of popular franchise sequels. Though not without a few notable new IPs and reboots coloring the mix. Without further ado, here’s what we thought was best from AAA and indie alike. 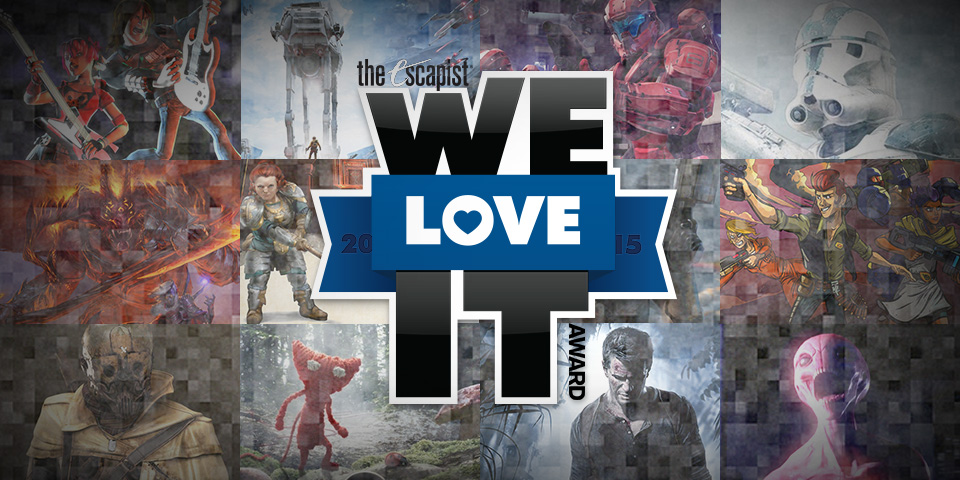 Few remember the great Rhythm Game Wars of the mid-to-late 2000s, but we haven’t forgotten. Activision‘s Guitar Hero and Harmonix’s Rock Band went head to head year after year, with the latter innovating and the former often following the leader. It’s no surprise that the two rhythm giants would make a comeback in the same year, but what is surprising is how different Guitar Hero feels, both from previous games in the franchise and the upcoming Rock Band 4. As it turns out, war does change: a redesigned guitar and intriguing MTV-esque interface, as well as the ability to play new songs on demand, make Guitar Hero Live feel almost as new and exciting as it was when the series first appeared in 2005.

Guitar Hero Live could have been an easy nostalgia cash-in for Activision, reviving the decade-old series after a long hiatus with little new to offer. Instead, the developers went their own way, and the result is a game that’s challenging (you try playing with three top and bottom buttons when you’re used to five!) and a standout in the genre. Rock on, Guitar Hero Live.

There is something really special about being able to rediscover a game you love at E3. In the world of reboots and franchises, it is astonishingly difficult to get it right. Yes, I know, this list contains A LOT of these types of games, but I think E3 2015 is one of the best E3s we’ve seen in 5-7 years. Most of the time, you are delivered the exact same game with a new storyline or something wildly different, which fails to catch the spark that caused you to fall in love with the game’s brand in the first place. This year, we’ve seen advancements, change, and a recognition of where things have gone wrong in the past and a willingness to change them. On the 2K front, things are no different.

I thought XCOM:EU was brilliant. But instead of relying on that foundation to do most of the work for them, Firaxis realized they could work on that formula and make it ever better. And it looks like they did just that. I found myself instantly picking out all the small and big changes alike, from the enhanced UI to new and exciting classes and abilities, XCOM 2 delivers everything that made XCOM: EU great, but in a better, upgraded fashion.

You can read about XCOM 2‘s announcement, or watch the trailer, here.
Curious why XCOM 2 is PC exclusive? That’s here.

Unravel stole our hearts at the EA press conference, but it would all be meaningless if the actual game itself fell flat. Fortunately, Unravel is an absolute joy to play, featuring exceptionally clever puzzles, solid platforming action, and a wonderful visual style that truly makes you feel like a tiny yarn doll, doing everything you can to navigate through a beautiful, but dangerous world. There are some definite comparisons that can be made to Limbo – not that that’s a bad thing – but Unravel manages to craft its own identity through the usage of Yarny’s unique abilities that have him using the yarn that makes up his body to swing across gaps, climb up platforms, and bounce to new heights.

Unravel is especially unique considering that this is a game being published by EA, which historically has not taken this kind of a leap of faith in trusting a small Swedish studio with a brand new IP in a genre popularized by small indie developers. It’s a gamble that I hope pays off for them, because we need more games like Unravel.

There were a lot of surprises at this year’s E3: Xbox One backwards compatibility, The Last Guardian, Final Fantasy 7 remake, and Shenmue 3‘s kickstarter. But no game that I actually got to play surprised me more than Halo 5. That’s because I usually know what to expect from the Halo series at E3. We get an exciting demo of a single player level that covers the new gameplay mechanics – which we also got this year – and maybe a small look at a new loadout system, or perk system, or whatever else Halo‘s multiplayer and developer 343 Industries appear to be borrowing from another franchise.

But this year we also got an extensive look at a brand new multiplayer mode that was totally unlike anything else that I’ve played in any other shooter, and one that is almost guaranteed to be imitated by the competition come next year. Warzone, at its core, is essentially a gigantic game of king of the hill, but with added rules, mechanics, and strategy that you might find in a MOBA. When a legendary AI boss appears, do you send the majority of your team to try and secure the kill on it, potentially giving up control of the bases? Do you spend your energy on a weapon that counters a vehicle rather than purchasing your own vehicle and risk getting shot down yourself? All of these questions are things that you’d never have to think about before in a game of Halo, and I can’t wait to see how the competitive community receives Warzone when it releases later this year.

Sony closed out its E3 briefing on June 15 with the big guns: An intense action sequence from Uncharted 4. The audience loved seeing Nate and Sully back in action, and we loved the extended presentation we got to see behind closed doors at E3. Even for a studio that’s made some of the most critically acclaimed games of the last few years, Naughty Dog has outdone itself with Uncharted 4. The character models are stellar, the environment is beautifully detailed, and the gameplay is pure Uncharted.

Sure, graphics are great and gunplay is fun, but what we really love about Uncharted is how Naughty Dog brings the series’ characters and environment to life. The dialogue is natural and snappy, as well as often humorous; facial animations and voice acting add depth; and the colorful locales are a breath of fresh air compared to the usual brown and gray-toned shooters. Uncharted 4 delivers more of all of this, and we can’t wait to play more.

You can read our coverage of the announcement here.

I always loved Dungeons & Dragons pen and paper play. Be it as a player in a great campaign or as a DM leading my friends through my vision of fantasy, the framework created for those setting was fantastic. And now with the evolution of computer games using those Wizards of the Coast rules, it is almost like playing at the table again.

With Sword Coast Legends, players get another campaign within the D&D rules that will bring back the nostalgia of Baldur’s Gate, Icewind Dale, and even most recently Pillars of Eternity. But what will set this game apart is something attempted in Neverwinter Nights, but never fully realized, a Dungeonmaster mode. The idea of being able to create your own campaigns and play as the DM with four players/friends. The ease of use of the tools demonstrated during the demo, and then the hands on time with the pre-built scenario run by the dungeonmaster (as a fifth player), already has my head spinning with the possibilities of bringing my old campaigns into the game.

The possibilities this opens up for tabletop players moving their campaigns into the computer is endless, and worth giving this one of our “We Love It” Awards.

I was late to the Fallout party, with my first taste being Fallout 3 well after release. I was immediately smitten with the setting and characters, the VATS combat, and, of course, Vault Boy. I played through the story multiple times, as is necessary to see the variety of interactions you can have with the characters in the world.

When Bethesda Softworks announced Fallout 4, it created a huge stir among virtually everybody I know, both in person, and across the internet. We’ve seen the updates to character customization and the robust new crafting system in the game. Some of the details are a bit sparse, but the broad strokes we’ve seen offer the familiarity of Fallout with major upgrades to systems to keep things feeling new. Possibly most exciting for me, personally, is being able to experience the pre-destruction world, as well as the post-apocalypse, as I expect this will create a lot of depth to the world and context for your adventure.

You can read our coverage of the announcement right here.

Not all games enter the E3 scene with a major press conference splash, but you’ll often find a hidden gem tucked away amidst an array of games you might never have heard of before in the Sony or Xbox booth. Sometimes, it’s all about getting your adrenaline pumping, and if there is one game at E3 that achieves just that this year, it’s Enter the Gungeon by Devolver Digital. This radial shooter is a dungeon-crawling loot fest that will have you table flipping and dodge-rolling your way through a fast-paced all-out shootout. Enter room after room of adorable bullet monsters shooting bullets at you while you’re dodging other bullets and shooting bullets of your own. Have I mentioned bullets? Taking charge of one of the many members of a rag-tag team, deep regret spurs you on to find “the gun that can kill the past.” On your way you’ll build a collection of over 200 guns aiding you in your survival as you fight your way through procedurally generated maps, taking down bosses as you advance.

I might lose a bit of credibility for saying this, but to be completely honest, I’ve never really been that big into the Star Wars franchise. I loved the original trilogy, absolutely, but I never sat down and watched the prequel trilogy, except in snippets here and there. For whatever reason, however, the original Star Wars: Battlefront and its sequel enthralled me for hundreds and hundreds of hours. Suffice to say, when I saw the announcement for the new Battlefront at E3 2013, I got incredibly excited. If you watch The Escapist Podcast with any frequency, you probably know that I’ve been excited ever since.

I finally got to play Battlefront this year, and, despite two full years of building it up in my head, I left the demo completely satisfied which, to be honest kind of shocked me. Despite my enthusiasm, i’ve had my reservations, but DICE has put those to rest. The variety of enemies, the in-universe tech, and the survival mode scheme all worked together expertly to offer a similar enough experience to the originals to satisfy my craving for nostalgia, but different enough to ensure that the fun of the gameplay wasn’t lost in the intervening years.

To go get caught up on everything else that released during E3, click through to our concentrated E3 coverage page.