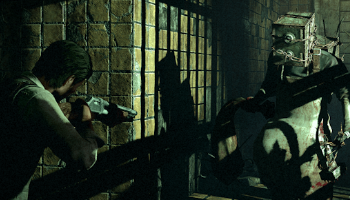 The Evil Within has been an exciting prospect among the recent resurgence of horror games. Riding high off the back of Alien: Isolation and striding on a foundation of independent scare fests, Shinji Mikami’s return to the genre he helped codify has felt like something worth getting eager for. Unfortunately, for all its attempts at being a full-blooded survival horror game, The Evil Within suffers in execution, and isn’t quite the bastion of terror it could have been.

To its credit, The Evil Within rarely plays the same gag twice. It starts as a thrilling game of cat-and-mouse, similar to Isolation or Outlast. After Castellanos escapes the hospital and ends up in a crashed ambulance out in the middle of nowhere, the game takes on a shape more reminiscent of Resident Evil 4. Crazed, warped villagers stumble through oddly rustic villages and forests, as players sneak, hide, and stab their way through these twisted human mockeries. The many boss battles that litter the experience are varied, and only occasionally feature repeat appearances from previously encountered monsters. There are chase sequences, action scenes, puzzles. Everything you’ve seen in survival horror since its inception is presented here, and celebrated.

It’s a fantastic endeavor, but unfortunately The Evil Within‘s focus on everything means it never feels specialized enough in any one area to fully realize its ideas. When I say the Resident Evil 4 sections feel exactly like Resident Evil 4, I mean they are just as old fashioned as Capcom’s GameCube classic, complete with dated mechanics that ignore any third-person shooter improvements made in that time. Similarly, the stealth features are simplistic, and often suffer from creatures simply “knowing” when you’re behind them. The combat, like in retro survival horror games, is inefficient and tricky, with low rates of fire and weapons that need a severe amount of upgrading to become effective – and yet there are many instances in which combat is necessary, and Sebastian is rubbish at it.

At times, The Evil Within comes off as simply mean-spirited in its interactions with the player. From instant-death traps that rely on trial-and-error surprise, to a sprinting meter that’s pathetically small pre-upgrade and causes Castellanos to stop for breath even when chased by a lunatic with a chainsaw, the game’s attempts to be difficult really stretch one’s notion of fairness. It’ll punish you for using resources and ammo you couldn’t have predicted you’ll need, it’ll lock you into a pre-boss checkpoint with no way of healing, even if your health is so low that sprinting has become disabled (yeah, that happens). It introduces mechanics and new ideas quietly, not informing the player, waiting for them to replay tracts of game multiple times and dying until they get it.

It’s bad enough that Bethesda even knows it. Alongside my review copy of the game was a note asking that reviewers play on the Casual difficulty setting, not the standard Survival setting (I went with the standard, by the way). Not only that, but each copy came with a sealed envelope containing advice and obscure tips for every single level of the game. Due to embargo restrictions, I cannot repeat those tips, but they provide sometimes crucial insight that the game itself never communicates. It’s clear that those presenting the game know it’s either imbalanced or does a terrible job of interfacing with the player. 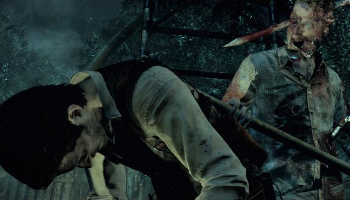 It’s sad to have to criticize The Evil Within this harshly, because it’s so obviously trying hard to provide a nostalgic survival horror adventure. It just seems to have drunk the Kool Aid when it recalls fallacious positive attributes of the genre. For example, many people claim that “bad controls” in Resident Evil and Silent Hill made them scarier, but I’d argue that more modern scary games, with competent and intuitive controls, exist. You can remove a player’s confidence and power for effect while still having a comfortable, workable user interface. The Evil Within, however, has taken the fallacy to heart, and so Castellanos aims like garbage and can’t run for shit. There are ways to make a game terrifying by stripping a player of strength, and there are ways of attempting it that simply exasperate. All too often, this particular horror game does the latter.

All that said, there are a number of stand-out moments that make the game more enjoyable. Visually, it’s a treat of macabre imagery and genuinely gruesome scenery, even if some of the enemies appear more like a thirteen-year-old’s idea of “badass monster covered in barbed wire n’ stuff.” The slower-paced, more open areas of the game’s early levels are particularly memorable, and there’s a lot to the upgrade system that makes exploring each stage valuable. Ostensibly, you collect green jars of “gel” in levels, then bring them back to a hospital hub world (accessed via mirrors in each stage) in order to improve health, sprinting, and all manner of gun attributes. Upgrades get expensive quickly, and weapon improvements are required to make most guns simply useful, but gel is plentiful enough that moderate explorers will get what they need.

There’s also the agony crossbow, an implement more comparable to a harpoon gun. It fires bolts of varying properties, from a standard impaler to a blinding flash, an exploding bomb, a paralyzing lightning trap and a freeze blast. By disarming traps in the wild (simply getting close to them and holding a button), one can use parts to built more bolts – a vital component of surviving many of the boss encounters.

The Evil Within‘s unwillingness to stick to a single formula is also admirable. While there are common zombie-like enemies that appear throughout, most levels feature unique monsters and hindrances that keep things shaken up. There are dimly lit corridors full of whirling steel blades, and then there are open-air daytime sections set in flooded cities. The eclectic locations and their specialized challenges ensure the game feels fresh, with a narrative justification that lets it make sense … kind of. It’s also something of a relief that the game’s most aggravating sections are almost always fully behind the player once they’ve been traversed. Don’t worry, those invisible enemies in that one stage won’t be showing up regularly after you’ve cleared them. Thank Christ.

That sense of relief is indicative of a major issue with the game. For anything that might be delightfully horrifying, there will be at least one area I got through that I simply never want to experience again. Those invisible enemies aren’t scary, they’re just a pain in the ass, and if I never have to fight the one-hit-kill final form of the mutant in the parking lot again, I’ll be happy. A sizable chunk of The Evil Within comprises elements that harry, punish, and irritate, and not in a fun, intense, Dark Souls kind of way – just a “How was I supposed to avoid THAT?” kind of way.

As a long-time lover of horror across all mediums, I have to say I’m somewhat let down by what The Evil Within has to offer. It does enough to be worth looking into for obsessive horror fans, but it isn’t the outstanding example I’d have expected from Mikami and his crew. It’s archaic without feeling nostalgic, it’s harsh but not entirely fair, and while it tries its hardest to evoke classic survival horror, it lives in the shadow of the games it draws blatant inspiration from.

Still, on those few moments it hits home, it does hit pretty solidly. Just not enough to be as great as it could be.

Bottom Line: The Evil Within is a noble attempt at bringing back classic survival horror, but it could have learned a thing or two from games that aren’t almost ten years old. It has its moments of brilliance, scattered through periods of antagonizing design.

Recommendation: The console space is starved for even acceptable survival horror, and in such a market, The Evil Within at least provides a taste of what we’ve been missing.